Illuminia (ILMN) is one of health care's best-performing companies. Here's why its gene sequencers may help it put up an equally impressive 2014.

Illumina (ILMN -0.95%) has been one of the health care sector's brightest stars. Its shares have more than doubled on expectations that research spending on gene therapies will boost demand for Illumina's gene sequencers.

However, Illumina's impressive run has made it one of the priciest companies in medical equipment. Investors are paying more than 60 times future earnings, and that suggests the company will have put up some pretty big numbers if investors are to be rewarded again this year. 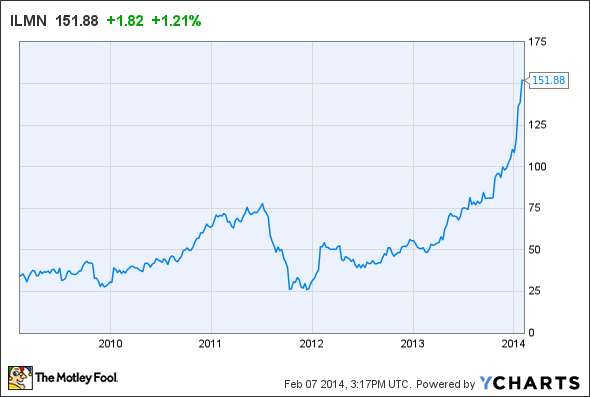 Investing in the future of medicine
Developing niche therapies targeting specific gene mutation is one of the hottest areas in drug research. By identifying the genes responsible for disease, patients may enjoy treatments with fewer side-effects and better outcomes. The approach is far from science fiction. Companies such as Roche (RHHBY -0.15%) are already marketing cancer treatments that turn on and off receptors associated with cancer.

Roche has been selling Herceptin, for example, as a treatment for use in HER-2-positive breast cancer patients since 2006. Herceptin has become so widely used its sales topped more than $6 billion worldwide last year. That success prompted Roche to develop two more HER-2-positive drugs, Kadcyla and Perjeta, which won FDA approval in February and September last year, respectively.

However, Roche is far from alone in advancing gene targeting drugs. A flurry of other projects designed to promote or inhibit protein activity are under way, including BioMarin's (BMRN 2.47%). BMN-673. That drug is designed to treat breast and ovarian cancer patients with a specific mutation to the BRCA 1 and BRCA 2 gene. Although that BRCA mutation is responsible for between only 5% and 10% of all breast cancer cases, an eventual approval could significantly boost BioMarin's sales.

While Roche and BioMarin are just two companies working on targeted therapies, their programs are emblematic of an industry-wide focus on personalized medicine, suggesting plenty of opportunity for Illumina to position its gene sequencers as a critical complement to next-generation RNAi and epigenetics cancer drugs.

Tapping into a big and growing market
A move back to normal budget negotiations and away from sequestration should help pave the way for research spending growth in the United States. Both the FDA and the National Institutes of Health remain critical cogs in product development and commercialization. Industry participants count on stable FDA budgets to ensure timely review and approval of new compounds, and researchers rely heavily on funding from the NIH to finance innovation.

Spending in Europe should also provide a tailwind for the company, given that spending previously shuttered by austerity-driven budget cuts should return as the region returns to growth.

The return of clarity in the States, China's growing demand, and recovery in Europe has industry watchers estimating that global R&D spend will improve 3.1% this year to $201 billion. That's up nicely from the $184 billion spent just three years ago. Importantly, since studies show the second biggest area of interest for researchers is personal genomics, a good portion of that research spending is likely to be directed to cancer research. If so, that would be good news for Illumina, since the company believes its addressable market in clinical oncology could total more than $11 billion.

Fool-worthy final thoughts
Illumina is already enjoying strong sales growth tied to the rising interest in gene therapy. Sales totaled $387 million in the fourth quarter, up 25% from last year. That brought full-year sales to $1.42 billion in 2013, up 24% from 2012 -- that's more than two times its sales in 2009.

Illumina's best customers remain academic and government researchers. However, its fastest growth is coming from commercial researchers. Over the past five years, sales to commercial users have climbed a compounded 34% annually.

That has Illumina thinking there's plenty more room to grow. Last quarter, the company spent more on R&D and hired more people to its commercial team in a bid to win more business. While those moves weigh down earnings right now, they could pay off handsomely as opportunities open up beyond identifying gene targets to also include identifying patients most at risk for disease and monitoring the effectiveness of these new therapies. That potential has the company thinking its sales could reach $2.4 billion in 2016, which means investors may want to keep a close eye on Illumina.

Todd Campbell has no position in any stocks mentioned. Todd owns E.B. Capital Markets, LLC. E.B. Capital's clients may or may not have positions in the companies mentioned. Todd also owns Gundalow Advisors, LLC. Gundalow's clients do not have positions in the companies mentioned. The Motley Fool recommends BioMarin Pharmaceutical and Illumina. We Fools don't all hold the same opinions, but we all believe that considering a diverse range of insights makes us better investors. The Motley Fool has a disclosure policy.