Fear on Wall Street has punished stocks so far this year, with the S&P 500 Index down 5.7% as of close on February 3, 2014. With continued gloomy reports of high valuations and a correction coming, the market is beginning to price very solid companies attractively, including Aflac  (NYSE:AFL), Nike (NYSE:NKE), and Starbucks (NASDAQ:SBUX). All three companies have watched their stocks fall quite a bit further than the S&P 500, as shown below: 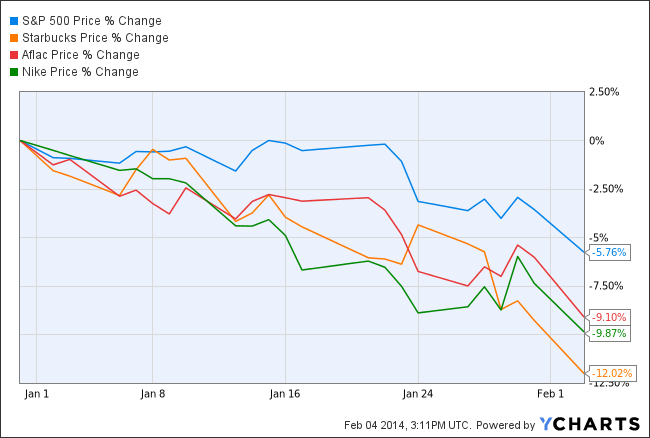 Remember back to your childhood when you always wanted a pair of new Nike shoes to start the school year or basketball season? Well, not much has changed over the years, Nike is still the classic choice for anyone looking for high performance or stylish footwear or other athletic apparel. I would like to challenge you to attempt to go a regular day without seeing hundreds of Nike "swooshes". The company has built an incredible following and brand loyalty, and after a quick glance at the company's financials, one could surely argue that Nike has a management as committed to the company as its customers.

Prrofit margins have averaged 9.21% over the same ten year period. Consistent and strong profit margins also help give us a better view of management competency, and Nike has passed the test again. Remember how tight times were in 2008 and 2009 (and to many still today)? Even in fiscal year 2008 and 2009 Nike had profit margins of 10.09% and 7.77%, respectively. Given Nike's price to earnings ratio of around 22 and a forward price to earnings ratio of 20, against a consumer goods sector average P/E ratio of 17.38, this company's valuation could still be a bit lofty, but worth keeping a close eye on if the market continues to be hard on this company's stock.

If you have watched television for more than 15 minutes this year, there is a good chance you have seen a duck (or possibly The Duck) shout "Af-lac!" and known exactly who the company avertising is. Aflac is one of the most easily recognizable insurance companies in the United States and is trading at a price to earnings ratio of just over 9 and a forward price to earnings ratio of just under 10. This P/E ratio is just a touch lower than the Accident and Health Insurance industry P/E ratio of 9.5, and well below the financial sector P/E ratio of 17.54. Over the last ten fiscal years this company has had return on equity of over 17%, on average, and earnings-per-share growth of 15% a year in the same time frame. Also, profit margins have averaged 9.5% and have been increasing.

As with Nike, Aflac appears to be an excellent run company with management adding plenty of value for shareholders. Why is this company's value eroding in the stock market? Your guess is as good as mine, but if it keeps going informed investors like you have a chance to own a great company and a great price.

Last but not least is Starbucks, which I believe holds the most compelling case for a buy. If you are anything like me you may only step foot inside a Starbucks to pick up the latest and greatest seasonal coffee drink for your girlfriend. However, you surely have noticed how many loyal customers love everything about Starbucks. Again, I would like to give you a challenge similar to the above with Nike, if you could go into your office and not see several Starbucks cups or mugs, I would be surprised.

Even though customers love it so much, investors are a little more skeptical; Starbucks has been beaten down by the market as well as by a litigation charge that wiped out nearly all of its earnings last fiscal year and an announcement of changes in top management. This litigation charge, which was ordered to be paid to Kraft, spawned from a contract termination by Starbucks to have Kraft distribute their products to stores. Starbucks believed Kraft did not hold up to their end of the bargain, but in the end an arbitrator leaned in favor with Kraft.

You and I could easily take advantage of others' short term sights, as mentioned above Starbucks holds incredible brand loyalty and it does not have much competition in its specialty market.

For my analysis I have added back the $2.7 billion litigation charge from FY 2013 (and applied appropriate taxes), due to it being an abnormal charge that should not affect business moving further. With these assumptions made, Starbucks has earned a return on equity of over 22% on average the last ten fiscal years. For the first quarter of 2014, Starbucks earnings per share rose to $0.71, to show you they are back on track with normal operations. Steadily increasing profit margins over the last ten years from around 7% to 10% show increasing efficiency in operations. Any further decline in stock price will make ownership of this company even sweeter for the long term buy and hold investor.

All three of these companies are steady and reliable, or as some would say: "boring". If the market continues to dump these stocks, they will become more and more attractive. With high levels of return on equity, earnings-per-share growth, and consistently high profit margins you can be confident in management of these three working in your favor.  "Boring" companies like Nike, Aflac, and Starbucks, if bought at attractive prices, can, over the long term, add double digit percentage returns to your portfolio with lower risk than "hot" stocks that Wall Street loves. If this downturn of the market continues, keep an eye on these three companies and their stocks.