Please ensure Javascript is enabled for purposes of website accessibility
Log In Help Join The Motley Fool
Free Article Join Over 1 Million Premium Members And Get More In-Depth Stock Guidance and Research
By Adam Levy - Feb 13, 2014 at 11:00AM

Even after a 50% gain in less than six months, Synaptics could keep going.

After climbing more than 50% since September, including a 6.5% gain on Wednesday, Synaptics (SYNA -0.43%) may look a bit pricey to some investors. Compared to competitors Cypress Semiconductor (CY) and Atmel (NASDAQ: ATML), however, the company may still be undervalued.

Synaptics has excellent growth opportunities in mobile devices, wearables, and the proliferation of touchscreens in other devices. The company is growing revenue much better than its competitors, and its margins are bigger, too. Still, the market is discounting Synaptics' future earnings much more than Cypress' and slightly more than Atmel's.

A quick look at valuation
Synaptics reports its fiscal year ending in June, but for the 12 months from January through December of this year, Wall Street expects the company to bring in about $3.74 in earnings per share. With shares trading around $60, that puts the company's forward P/E at 16.

Synaptics is growing revenue faster than both of its competitors. With its PC division finally stabilizing, the growth in its touchscreen business is starting to shine through. The company also recently acquired Validity, which specializes in fingerprint scanners, adding another growing revenue source outside of its core touch business. Analysts estimate Synaptics will grow revenue another 27.8% in fiscal 2014, which ends in June.

With that revenue growth, the company is also expanding its margins. Synaptics is now posting better gross and operating margins than both Atmel and Cypress. 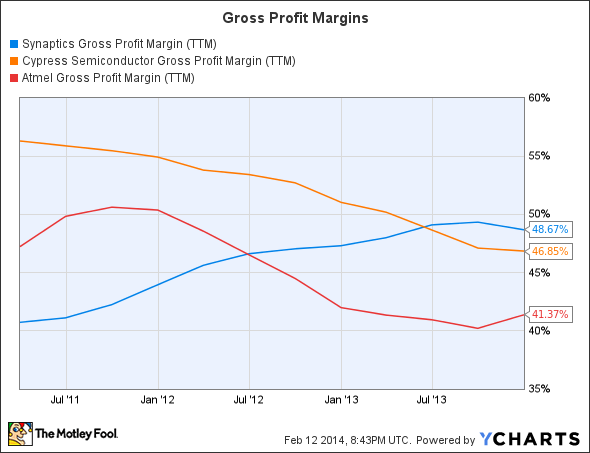 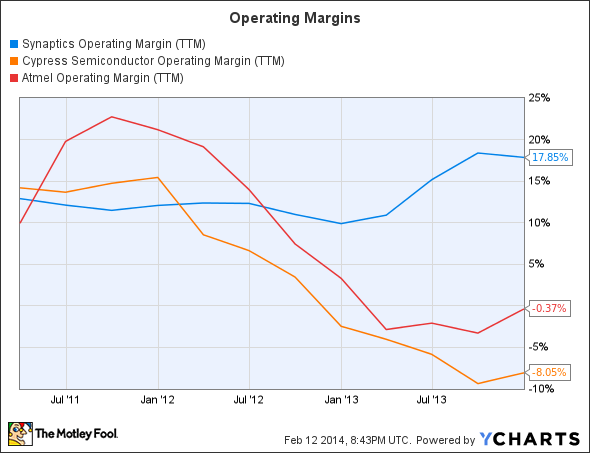 Competing on the low end
Synaptics was very successful in getting its touchscreen technology into high-end smartphones, and it's no secret that most of the growth going forward is going to come from the low end. Although Cypress has its sights set on capturing a big chunk of that market, Synaptics is doing well to get its chips into a growing number of Chinese OEMs.

On Synaptics' fourth-quarter conference call, CEO Richard Bergman specifically pointed to the company's relationships with Lenovo, Huawei, ZTE, and Coolpad. Each of those companies are poised to expand its share of the market in 2014, particularly Lenovo, which recently purchased Motorola Mobility from Google.

Cypress, meanwhile, is in a race to the bottom against Chinese chipmakers, but management feels it's capable of capturing market share on the low end with its superior technology. Although this will sacrifice margins, it will bring in key design wins and revenue growth as the company battles the decline of its SRAM business.

Competing on the high-end
Atmel has steadily lost share of the mobile market, and it isn't looking to compete by offering lower-price products. This may ultimately cost the company, unless it finds other verticals. It is well-positioned in the touchscreen in-car infotainment market, but it is not immune from competition.

Synaptics, on the other hand, decided to expand its product portfolio in an attempt to increase its average revenue per unit. The company was able to turn around its PC segment revenue by buying Validity, as well as expanding from trackpads to keyboards. It expects to continue growing its mobile segment in the same way.

Good growth at a good price
Synaptics looks like it can continue to grow its revenue and earnings at a strong pace compared to the competition, and the market is working quickly to reflect that. Currently, it's trading at a slight discount to its competition, which may mean that Synaptics shares can continue climbing despite its strong performance over the last six months.

Adam Levy has no position in any stocks mentioned. The Motley Fool recommends Cypress Semiconductor. Try any of our Foolish newsletter services free for 30 days. We Fools may not all hold the same opinions, but we all believe that considering a diverse range of insights makes us better investors. The Motley Fool has a disclosure policy.