Mallinckrodt's (MNK) pain killer drug Xartemis may give doctors a drug that's less likely to be abused than current options.

Mallinckrodt Plc (MNK) is having a stellar run since being spun-off by Covidien (COV.DL) last summer. The split-up is unlocking value at both companies as Covidien focuses on its medical device business and Mallinckrodt advances new pain killing compounds to market.

So far, the decision to separate is paying off handsomely. Covidien's sales have marched steadily higher since Mallinckrodt's IPO, and Maillinckrodt shares have surged since November on enthusiasm surrounding its extended release oxycodone. Here's what you need to know about Mallinckrodt's Xartemis, including why it could displace current pain killers. 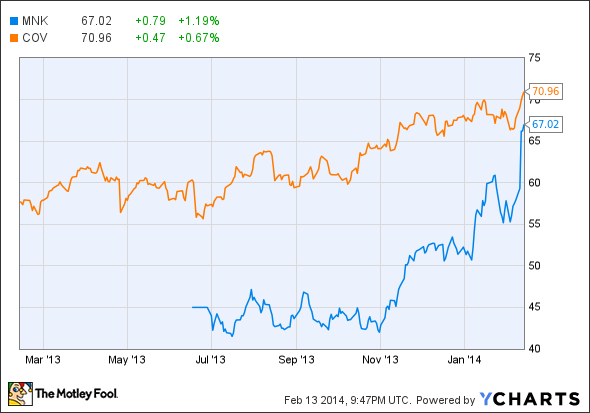 According to the Institute of Medicine, as many as 100 million Americans suffer from some form of chronic pain each year -- costing between $560 billion and $635 billion in treatment and economic loss annually.  Research from the National Center of Health Statistics estimates that 46 million Americans experience acute pain following inpatient procedures every year.

As a result, the number of prescriptions written for pain has been soaring. Between 1999 and 2010, sales of opioid pain relieving drugs have quadrupled.  Sadly, overdoses are surging too.

The Centers for Disease Control reports that the number of prescription drug overdoses in the U.S. has tripled since 1990.  A big portion of those deaths -- nearly three of every four -- have been tied to prescription opioids, including Percocet, a brand name combination of acetaminophen and oxycodone, and Oxycontin, a drug commonly prescribed for chronic pain.

Given the risk, you might think painkillers' efficacy significantly outweighs the potential for overdose. Unfortunately, for many that's not the case. More than 50% of those suffering from chronic pain report they still have little control over their pain, and 77% of those patients report feelings of depression. Of patients having undergone surgery, 80% reported moderate to severe acute pain in the first hours to days following surgery.Those aren't the kind of numbers you want to see in a patient population being treated with drugs that are prone to misuse.

As a result, the FDA is cracking down on these drugs. They've asked drug makers to reduce levels of acetaminophen in oxycodone combinations and are likely to change the classification of hydrocodone drugs like Vicodin to schedule two, its strictest level. Oxycontin's maker, Purdue Pharma, L.P. has also shelved its original formulation for a newer version in an attempt to make it harder for people to inhale or inject it.

Innovating existing treatments
Given widening use and abuse, drug developers are hunting for a better solution. However, results are coming up short. Avanir (NASDAQ: AVNR), for example, saw shares drop more than 40% in December when its AVP-923 pain killing candidate failed to outperform placebo in mid stage trials.

Mallinckrodt had better success in trials than Avanir and hopes its extended release combination of oxycodone and acetaminophen can win FDA support when the agency decides its fate early this year. If approved, Malllinckrodt thinks Xartemis XR could capture a big chunk of acute care acetaminophen and oxycodone scripts because Xartemis has been specially formulated to reduce user ability to abuse the drug.

What it means for the company
Malinckrodt submitted Xartemis XR to the FDA for approval for acute pain in July. Since the drug received priority review, an FDA decision and possible launch should happen between now and the end of the second quarter. Assuming the FDA green lights the drug, Xartemis will become the only extended release drug combining oxycodone with acetaminophen on the market.

An approval would be timely given that Mallinckrodt's best selling drugs, Exalgo and methylphenidate ER , or generic Concerta, will face stiffer competition this year. The two drugs helped the company's specialty drug sales climb 19% to nearly $310 million in the fourth quarter.

Fool-worthy final thoughts
Developing a new, safer pain treatment in Xartemis could mean big money for Mallinckrodt, suggesting an FDA decision on this drug may be the most important piece of news shareholders should look out for this year. If the FDA grants approval, sales will likely begin having an impact in the third quarter. Outside of Xartemis there are a few other intriguing therapies that could help offset risk of slowing sales for Exalgo and generic Concerta, including Pennsaid and MNK-155. But their opportunity is more muted than Xartemis'.

Todd Campbell has no position in any stocks mentioned. Todd owns E.B. Capital Markets, LLC. E.B. Capital's clients may or may not have positions in the companies mentioned.  Todd also owns Gundalow Advisors, LLC.  Gundalow's clients do not have positions in the companies mentioned. The Motley Fool recommends Covidien. We Fools may not all hold the same opinions, but we all believe that considering a diverse range of insights makes us better investors. The Motley Fool has a disclosure policy.