AT&T's decision not to purchase Vodafone has surprising effects on other global wireless giants.

Recently, AT&T (T -0.55%) announced it would not purchase British telecom giant Vodafone (VOD -0.27%) for at least six months. Even though some analysts believe that an offer down the road is still likely, the decision had far-reaching consequences in the world of international telecom.

Here are three companies that lose, and two that gain from AT&T's announcement.

Loser No. 1: Vodafone
After AT&T's announcement, Vodafone shares dropped 6%. Shareholders who had been hoping for a potential payday if AT&T made a bid for the company decided that six months or more was too long to wait. The stock, which had been on an upward trend since July, has languished since.

However, as with any sell-off, this may offer a buying opportunity for long-term investors. Vodafone is the second-largest telecom in the world, and it offers significant exposure to Europe and developing nations, especially in Africa and India. It also -- at least currently -- owns nearly half of Verizon (VZ -0.67%) Wireless.

Loser No. 2: America Movil  (AMX -1.14%)
AT&T's potential bid for Vodafone would have altered the global wireless landscape. All of a sudden, AT&T would have had lots of foreign exposure. The trouble is, it didn't want that exposure.

Well, it wanted Europe. Seems like everybody wants to get into European telecom these days. Billionaire Carlos Slim, who owns America Movil, recently tried unsuccessfully to take over Dutch telecom KPN.

Slim's company is facing a hostile regulatory environment in its native Mexico, where its monopoly position is threatened. It's also losing to Spanish rival Telefonica in South and Central America. With America Movil's stock price dropping faster than Slim can repurchase shares to buoy it, America Movil needs a new market, and fast.

Word on the street was that when AT&T bought Vodafone, it could sell Vodafone's extensive African and Asian holdings to America Movil in order to concentrate on Europe and North America. With the Vodafone deal on hold, though, Slim will need to look elsewhere, but his map of potential new markets is shrinking faster than America Movil's stock price -- and that's fast!

Loser No. 3: China Mobile (CHL)
China Mobile was the other buyer that AT&T was considering for Vodafone's Indian and African holdings. As the largest telecom in the world by subscription base -- with more than 700 million subscribers -- China Mobile has little room to expand domestically. Plus, with Chinese economic growth slowing, it's not surprising that China Mobile would want to look for opportunity beyond its borders. And, conveniently, India's right next door.

China as a whole has been experiencing growing pains. Most of the country's wealth has come from manufacturing goods cheaply for foreign companies, and the Chinese government is looking for opportunities to create a global brand of its own. Telecom, where one service is pretty much indistinguishable from another, is a good industry to try.

China Mobile has already started by launching a small venture in nearby Pakistan. But with this announcement, it looks like it won't be breaking into India -- at least, not anytime soon.

But enough about the losers. Who are the winners?

Winner No. 1: Verizon
If AT&T had purchased Vodafone, it would have temporarily found itself in possession of 45% of its main rival's cash cow, Verizon Wireless. Of course, a deal is already in place to buy out Vodafone's share, but in the interim, it's unclear how regulators would have viewed such a unique situation. Clearly, it's far better for Verizon to be dealing with Vodafone alone, without potential interference from AT&T.

Winner No. 2: AT&T Shareholders
How do AT&T shareholders benefit from this lack of a takeover? Wouldn't it be better for AT&T to gain access to Vodafone's global holdings, particularly in Europe?

Not necessarily. Vodafone's service revenues have been declining, not increasing. In Europe, they were down 9.6% in the third quarter of 2013 alone. Not a single one of its major European markets saw gains. Clearly, AT&T is better off passing on this whole mess.

The other reason this is good for AT&T shareholders is best summed up in one word: debt. AT&T has a very high debt burden already, one that has increased sharply over the past few years. 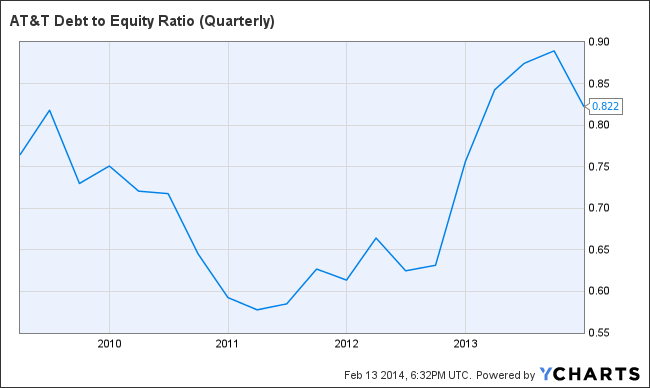 A purchase of Vodafone -- a larger company -- would necessarily involve running up even more debt, which at a time of decreased revenues and rising interest rates, might not be the wisest strategy. AT&T shareholders have actually dodged a bullet here.

Conclusion
The businesses of international telecom companies, especially mobile providers, are so intertwined that even small ripples in one market can make huge waves in others. That's why it pays to keep up with what's often a swiftly changing global telecom landscape.

There's no guarantee that AT&T won't try to purchase Vodafone down the road. But right now, America Movil, Vodafone, and China Mobile are victims of this global phenomenon, while Verizon and AT&T have come out ahead.