"Office Space" hit theaters 15 years ago. While it wasn't a major success at the time, it's become a pop culture success story that has gained an incredible following.

Fifteen years ago today 20th Century Fox (FOXA) released Office Space, a movie that has more than stood the test of time. In fact, it's only gotten better as it's aged. The movie was a bust at the box office, but its legacy is storied and has affected not just the world of entertainment but the world of business. 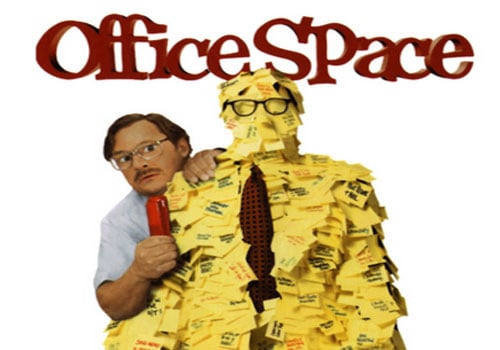 Movies getting a second life on home video isn't a new thing, but for Office Space it was a little different. Produced for just $10 million, the film barely recouped that at the box office and was considered a flop. But just as Family Guy got a second chance through its DVD sales, so did Office Space, with an assist from Comedy Central.

While the movie hit DVD in 1999, it wasn't until the cable channel started running it two years later that business began to pick up. The initial airing saw solid numbers and then became a network staple, airing more than 30 times over the next two years. VHS/DVD (remember those?) sales jumped and over 2.5 million people felt compelled to own it.

That's a phenomenon unlikely to repeat itself these days. With DVD/Blu-Ray sales not what they used to be and streaming the new "it" medium, it's unlikely a film nowadays could see that sizable a shift to take it from miss to hit.

The film's success wasn't just a boon to the home entertainment market, but to the office supply industry as well. The movie's iconic "red stapler" didn't exist when Space came out. The prop department needed a bright color for the cameras and settled on red. Swingline, the company that made the stapler, was then inundated with requests and decided to start selling them in stores.

All of sudden the company had a whole new younger market interested in its product. According to The Wall Street Journal, Swingline executives didn't initially recognize the opportunity at first and PASSED on the chance to be a part of the film, saying they didn't think its customers would "trade up" from their current version. The film's director, Mike Judge, decided he was going to use it anyway and the company eventually greatly benefited as a result.

But while the movie did wonders for office supplies, the success of the film didn't translate as much to its stars.

While lead Ron Livingston has had solid work since then with roles on The Practice and more recently Boardwalk Empire, he still gets confused for Kyle Chandler and Murk Duplass, and hasn't become a star. His partners in crime in the movie, David Herman (Michael Bolton) and Ajay Naidu (Samir Nagheenanajar), are in the same position. Naidu has settled for lower-profile parts in the years since, while Herman's done quite well … even though you aren't seeing his face everywhere. He's had a successful career as a vocal actor on animated series such as Futurama, Brickleberry, and Bob's Burgers.

Yes, Jennifer Aniston famously bucks that trend, but she owes her rise to stardom to her work on Friends and a string of successful films (Bruce Almighty, Along Came Polly, The Break-Up) that came toward the end of the sitcom and beyond.

But even fans who only recognize her as "Rachel" are probably familiar with her disdain for the "pieces of flair" required by the restaurant where she worked in Office Space. The film has significantly affected the world of pop culture -- its many quotable lines have become embedded in our vernacular.

From the world of "TPS reports" and "PC load letter" warnings to "sounds like somebody has a case of the Mondays," odds are strong you, your friends, and your coworkers have referenced the film. And with Office Space still a popular selection for midnight showings -- right up there with The Rocky Horror Picture Show -- it will continue to reach audiences and influence culture.

Office Space is truly a unique movie -- 15 years later, it continues to be the exception to the rule. And yes … you can still buy the "red stapler."