Candy Crush Saga developer King is filing for an IPO. Does the company have an advantage over struggling competitor Zynga? 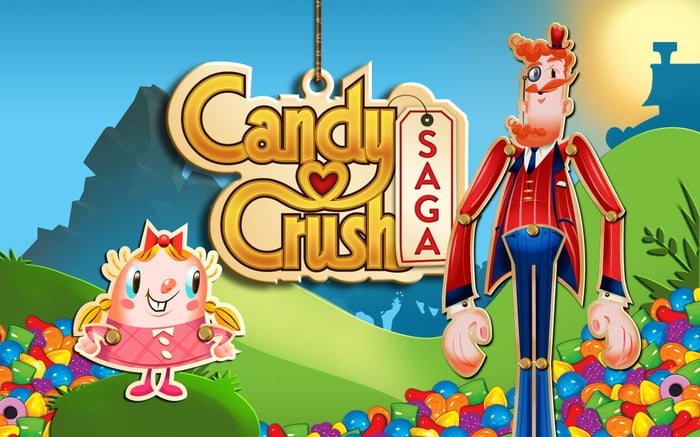 Proving the rumors true, King Digital Media -- the gaming company behind Candy Crush Saga – has filed paperwork to become a publicly traded company. King plans to trade under the ticker KING and hopes to raise $300 million in the offering. The IPO will earn buzz due to Candy Crush's popularity, but the social gaming sphere is difficult to monetize. Will King beat the odds, or run into the same money problems that have plagued Zynga (ZNGA)?

King has existed for over a decade, but wasn't a major blip on the public radar until the release of Candy Crush Saga in the spring of 2012. Candy Crush has become a top game both on Facebook and mobile platforms, and paved the way for the success of following Saga games. But, can King sustain its growth over the coming years?

Here are three key facts to know about King's IPO.

1. King's games monetize better than Zynga's
King and Zynga both depend on the "freemium" model, wherein games don't cost anything upfront, but offer purchasable in-game incentives. Zynga also derives a small amount of revenue from advertising, but King nixed ads in the second quarter of last year. So, King is even more reliant on players making in-game purchases.

That model seems to work for King at the moment. As of December, King games had a total of 128 daily active users, or DAUs, and 324 million monthly unique users, or MUUs. Monthly active payers (the number of players making in-game purchases) numbered 4 million, which represents 4% of the MUUs, double the percentage that pay to play Zynga games. King disclosed that 73% of fourth-quarter bookings came from mobile platforms, which is an area where Zynga has had trouble gaining ground.

Zynga historically had a symbiotic relationship with Facebook (META 2.53%) that included the social media giant divulging in its own IPO papers that Zynga accounted for 12% of its total revenue. Zynga has made moves to distance itself from Facebook, most notably the recent acquisition of mobile gaming studio NaturalMotion.

But, there's a significant catch to King's strong numbers. The company is overly reliant on one game, and that game is showing early signs of deceleration.

2. King is overly reliant on Candy Crush
King reported fourth-quarter gross bookings of $632 million, an increase of more than 2,000% from the first quarter.But, more than three-quarters of the bookings came from Candy Crush Saga. The game remains popular with about 93 million daily active users, but King admitted in its F-1 filing that the bookings drop between the third and fourth quarters was due to a decline in Candy Crush's performance. According to the company: "Gross bookings in the quarter ended December 31, 2013 slightly declined compared to the quarter ended September 30, 2013. The decline was driven by a decrease in Candy Crush Saga gross bookings, which was mostly offset by an increase in gross bookings across all of our other games."

Zynga has a similar dependence on a few titles, but has more games in the mix. Over 60% of the company's fourth-quarter online game revenue came from three titles: Farmville, Zynga Poker, and Farmville 2. What does King have as backup? The company didn't break down the specific bookings percentage for any other games, but did provide DAUs for the most popular titles:

To put those numbers into perspective, Zynga's Farmville 2 and Zynga Poker both have about one million DAUs. The number of players is strong, but the fact that Candy Crush accounts for that much of bookings means the other titles aren't monetizing as well.

It would prove foolish (little "f") to think that King could replicate the sudden growth associated with Candy Crush's rise.

3. Unsustainable growth rates
King's revenue and bookings won't continue to grow at the same rates achieved in the past two years. 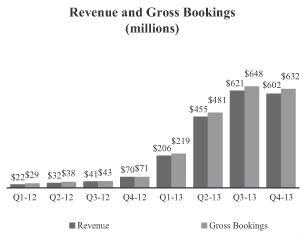 It's unlikely that King will replicate the levels of Candy Crush's success again in the future. Candy Crush's player numbers and associated bookings will dwindle at some point -- deceleration is the nature of the social gaming beast. But, King could still prove a healthy company if its other games start monetizing better.

Foolish final thoughts
King beats Zynga at both mobile presence and the percentage of players paying. But, King's over-reliance on Candy Crush Saga could prove its Achilles' heel if the company doesn't develop more titles that monetize better.

Stocks to Be Thankful for and Stocks to Avoid
376%