With a recent stream of comic book-inspired TV series doing well in the ratings, Fox is ready to take a shot with Gotham. Centered around DC Comics' famed policeman James Gordon, the show is slated to premiere this fall.

Over the past two years The CW has seen success with its drama Arrow, which is adapted from DC's popular Green Arrow comic. This fall it's widely expected that the network will add Arrow's friend Barry Allen to the mix with the launch of The Flash. But the super speedster won't be the only new DC face on screen as Fox (FOXA) is looking to launch Gotham, centered on Gotham City Police Commissioner James Gordon. 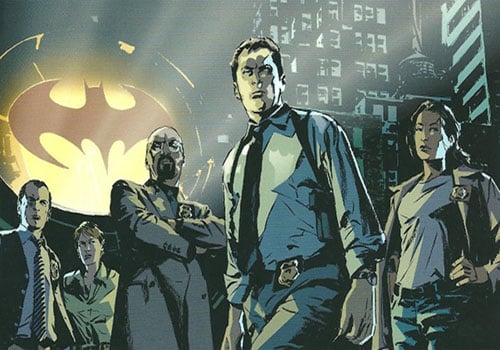 The twist though is like The CW did with Smallville and Arrow, this will be an origin story showing how Gordon went from cop to commish. The premise has already made fans in the comic book community who have always enjoyed reading about Gotham's top cop over the years. A supporter of the city's protector, Batman, Gordon always tries to be the voice of reason and has stood by Gotham even in its darkest times.

His backstory is full of interesting tales, but what's equally cool is that the series will involve other famous Gothamites and show audiences how they evolved as well. The drama will even introduce near characters into the DC canon that will help expand the universe and shed new light on old favorites.

Like with recent successful adaptations, Gotham producers already seem to be aware the only way to appeal to the comic community is to show them they respect them. Rule number one of comic-book adaptations: Don't underestimate the fans...otherwise you will quickly regret it.

Over the last few weeks the network has been slowly unveiling its cast, giving the community a chance to get comfortable with its ensemble. For the key role of Gordon, Fox has signed Ben McKenzie, who cut his acting teeth on the network's The O.C. and then solidified himself as a bankable star with Southland, which thrived on TNT after NBC canceled it.

The public's response to McKenzie was solid, with many hoping his signing would mean the gritty style of Southland would carry over to the equally gritty world of Gotham City. Fans also liked that McKenzie is no stranger to this world as he voiced Batman in the DVD release Batman: Year One.

However the Internet lit up when comic actor turned drama star Donal Logue signed on as Detective Harvey Bullock, Gordon's partner and friend. Fans loved the idea of Logue playing the rough-around-the-edges cop who despite his frequent line-crossing behavior stands by Gordon regardless. While Gordon is well-known outside the comic world, Bullock isn't and his inclusion speaks volumes to the Batman fan base.

Now comes word that Jada Pinkett-Smith is set to recur as Fish Mooney, a crime boss who'll tangle with the Gotham P.D. Mooney is an example of one of those additions not based on an established character, but a new creation just for the series. However if the "fishy" moniker set off any bells, it's because one of her henchman will be Oswald Cobblepot, who eventually becomes Batman rogue The Penguin.

Gotham is among the most watched series in development at the moment thanks in large part to Fox's controversial strategy to abandon pilot season. The move is risky, but the network believes the long-term effect outweighs the potential short-term obstacles; namely giving its rivals a sneak peak at which shows they will ultimately have to schedule against in the fall.

Yet Fox has enjoyed recent success with its dramas. Both The Following and Sleepy Hollow proved to be hits and each carried a darker tone than most similar series on other networks. Gotham looks to fall somewhere in between. And with the success of Arrow and the expected success of The Flash, the odds seem to be in the network's favor. These type of superhero-centric programs are making their mark on broadcast TV and this could be a nice addition to that world.