Solazyme (NASDAQ:TVIA) and Amyris (NASDAQ:AMRS) should be on everyone's investing radar in 2014. The industrial biotech duo is utilizing synthetic biology to create renewable products with unparalleled quality, consistency, and reliability at commercial scale (that's the eventual goal, anyway). While biology presents a unique set of challenges, and not every chemical can be produced biologically to compete with petroleum processes, there are several unique advantages to utilizing the building blocks of life to create the chemicals that comprise our world's everyday products. And it's exactly how Solazyme and Amyris -- and synthetic biology in general -- can help stabilize a risky world. 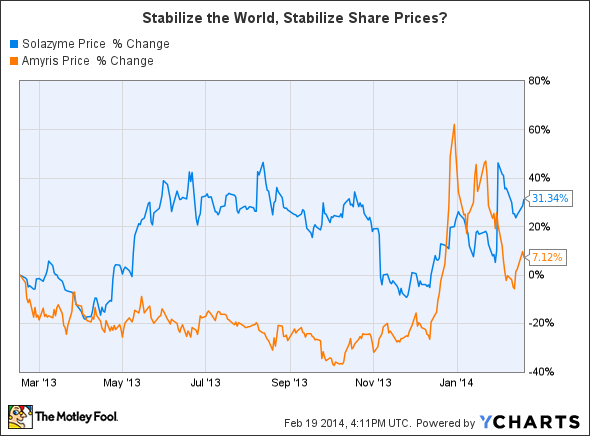 Stability begins to trickle in this year
The world will soon be transformed from a place that talks about producing a wide-range of biobased chemicals on a large scale to one that actually produces them, as both companies ramp commercial operations this year. How do their platforms create stability? Consider that a major conflict or political strife in an oil-rich region of the world can send prices soaring, while a drought can greatly diminish harvests for an entire year's crop. That adds volatility to pricing and supply, which ends up as the consumer's burden.

Now, consider what the platforms of Amyris and Solazyme bring to the table. Synthetic biology shifts supply chain risk from sourcing natural resources to our ability to write more efficient genomes. For instance, the first biological pathway created by Amyris allowed yeast to produce the precursor to the anti-malarial drug ingredient artemisinin, artemisinic acid. What's the big deal? Read this snippet from the company's website detailing the significance of commercial production of the compound by pharmaceutical giant Sanofi:

Malaria is a preventable disease that affects over a quarter of a billion people and claims the lives of 650,000 people annually, mostly children under the age of five in Africa. Artemisinin, sourced from the wormwood plant, Artemisia annua, has been used for centuries in treating malaria but its availability, cost, and quality have been highly volatile.

Sanofi is aiming to produce nearly one-third of the global supply of the drug once operations reach nameplate capacity (much smaller volumes are required for the fermentation of pharmaceutical compounds than commodity chemicals). It's an impressive feat.

Lives may not be at stake for producing other compounds, but each company's current platform can alleviate or eliminate similar sourcing obstacles. Take, for example, the emollient squalane being producing by Amyris. The cosmetic ingredient is typically sourced from shark liver (yes, shark liver) and olive oil -- both of which pose significant pricing and sourcing hurdles. Amyris' process, although still only producing a fraction of nameplate capacity, is already stabilizing the global supply of squalane, and increasing the market for the emollient.

Not to be outdone, Solazyme is producing renewable oils from its heterotrophic algae that offer significant sourcing advantages over market incumbents. For instance, the production of palm oil is incredibly destructive. It may represent a $50 billion market annually, but palm plantations have destroyed more than 30,000 square miles of rainforest. Good news: Solazyme can produce large quantities of the compounds found in palm oils year-round from any geographic location with a nearby sugar supply. That includes producing over 400% more myristic acid and C8-C10 (eight-to-10 carbon molecule oils) than is found in palm and coconut sources. Orangutans rejoice!

Foolish bottom line
We can never completely root risk from any production system or market -- and would be ill-advised to believe that we could -- but synthetic biology platforms such as those at Solazyme and Amyris will add certainty to the world. Of course, if you speak to the founders of the field (George Church, Jay Keasling, Tom Knight, and the handful of others), then producing many of modern society's essential compounds from a single microorganism is one of the ultimate goals of the technology. It may sound too good to be true, but I've spoken to start-ups that can target commodity chemicals, specialty chemicals, and pharmaceuticals with a single biological pathway and platform. Perhaps our ability to de-risk the future isn't as crazy as it sounds.