This week was perhaps the most significant one yet for social-media giant Facebook (META -3.84%) since its IPO in May 2012.

By now, you probably know Facebook announced that it's buying the burgeoning messaging powerhouse WhatsApp for a jaw-dropping $19 billion, including stock-based compensation.

And while the deal seems to defy even the most liberal notions of sound valuation, I find myself supporting Facebook's aggressive move here. In spite of the sticker shock from the deal, the reality is that Facebook just poached what's very quickly becoming one of the world's most powerful mobile companies.

Of course, the deal is by no means a surefire win for Facebook. And as we let the dust begin to settle around this eye-popping tech storyline, I want to highlight two specific risks that could artificially cap the happy union between Facebook and WhatsApp.

1. Taking Asia by storm
As famed energy investor T. Boone Pickens not so humbly put it, the first billion is the hardest.

Facebook CEO Mark Zuckerberg noted that WhatsApp is well on its way to grow from its current user base of 450 million to well over 1 billion users in the not-too-distant future. That's an impressive feat no matter how you slice it. But unlike what Pickens said, the next billion users might prove much more challenging to gain than the first.

Because as WhatsApp continues to expand its global footprint, it will increasingly run into several other fiercely popular messaging apps that often dominate a specific geography, many of which call Asia home. Tencent Holdings' WeChat sports some around 272 million monthly active users, or MAUs. Japan-based Line claims more than 340 million registered users, although that isn't the same as an MAU. South Korea's Kakao Talk boats 133 million registered users. 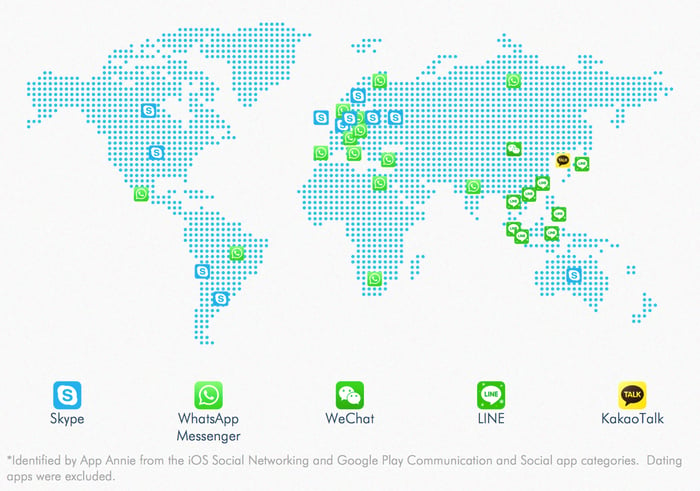 The implication here is that, although WhatsApp claims the pole position in the race for global messaging dominance, it will need to increasingly compete against a growing cadre of capable competitors for it to realize Facebook's grand vision for the platform.

This is certainly possible, but it's by no means a given for WhatsApp.

2. Facebook has to play nice
This risk factor is vastly more achievable, but Facebook will once again have to navigate the delicate balance between privacy and quality of user experience against the economic reality that it just spent $19 billion to acquire a company with $20 million in revenue last year.

Eventually, Facebook and WhatsApp's management team will probably have to begin to monetize the platform at least to a greater degree than it is today. WhatsApp users are notoriously active, with 70% of its 450 million users using the service on a daily basis, and any move that hampers WhatsApp's simple interface could prove a major turnoff for its users.

As with Facebook's other mega-acquisition, Instagram, Facebook has pledged to allow WhatsApp's management to remain largely autonomous. This bodes well for the integrity of WhatsApp's user experience, since its co-founder and CEO, Jan Koum famously reviles advertising.

And while it's far too early to tell how WhatsApp's long-term monetization efforts will take shape, Facebook certainly wasn't donating that $19 billion to charity.

At the end of the day, WhatsApp appears to be in an enviably strong position. However, Facebook investors would do well to watch these two storylines, as they each could have a major influence in determining whether Facebook's billions end up well spent or going up in smoke.

Andrew Tonner has no position in any stocks mentioned. The Motley Fool recommends and owns shares of Amazon.com and Facebook. Try any of our Foolish newsletter services free for 30 days. We Fools don't all hold the same opinions, but we all believe that considering a diverse range of insights makes us better investors. The Motley Fool has a disclosure policy.