Buying WhatsApp isn't an acquisition of new revenue streams, it's an investment in Facebook's future.

In the social-media world, there are only a handful of core ways to make money. You can sell advertising, charge your users, or do a combination of the two. Facebook (META 1.23%) takes the traditional approach selling ads on its site and mobile app, and it's worked extremely well so far. In the fourth quarter of 2013 the company brought in $2.59 billion in revenue.

But Facebook's latest acquisition, the messaging service WhatsApp, takes the second approach and sells the service for just $1 per year. It's actually free for the first year, then users can pay the dollar for some premium features, but most of them continue using the free features after the first year ends.

WhatsApp is vehemently opposed to advertising, something the company reiterated after it was announced that Facebook is buying the company for about $16 billion. That opposition makes it fundamentally incompatible with how Facebook works -- which is exactly why it could be such a great move.

Just say no to ads
To understand the differences between Facebook and WhatsApp, we need to look no further than a blog post on the WhatsApp website from June 2012. In the post, the company explains why it's opposed to selling ads. Here what it had to say:

Facebook, essentially, is the alternative. And perhaps that's why its CEO, Mark Zuckerberg, wanted WhatsApp so badly.

Growing up
The purchase may be just as much about Facebook's growing up as it is about WhatsApp's user growth. On its investor's site, Facebook published a graph comparing WhatsApp's first few years of growth to other social media sites. Take a look: 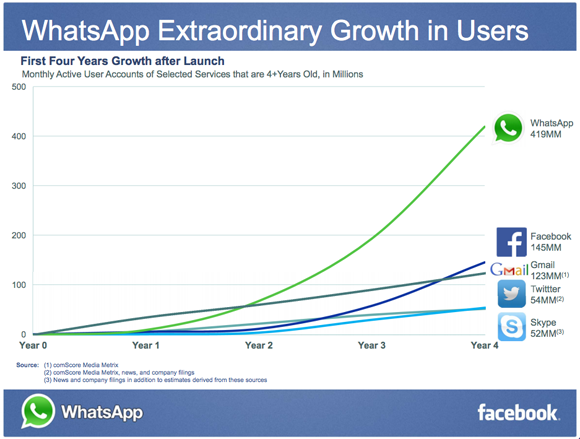 It also listed some phenomenal stats for the messaging app, including:

WhatsApp also has a strong international presence, something Facebook is always looking for more of. But Facebook doesn't want to turn WhatsApp into the new version of Facebook Messenger, and it's keeping the two apps distinct for right now. Besides WhatsApp CEO Jan Koum joining Facebook's board of directors, the two companies will remain separate.

Aside from all its growth, if Facebook isn't going to make much money from WhatsApp right now, and the service doesn't appear to have an advertising focus, what's Facebook's play with this? Survival.

Foolish final thoughts
As with many mergers and acquisitions, Facebook's purchase is an investment in the company's future. Facebook knows that in social media, and any tech industry, existing models become old very quickly. Instagram, Snapchat, Google+, Twitter, MySpace, WeChat, etc., have all proved that no one knows just how quickly a social media service will grow or how quickly users will take their loyalties elsewhere.

It's through adaptation that social-media companies survive.

Facebook then can both continue to generate billions in revenue using its "old" system, while also adapting to "new" systems through WhatsApp. Facebook has shown several times that it intends to expand beyond its current business model by paying $1 billion for Instagram, offering $3 billion for Snapchat, and now paying up to $19 billion for WhatsApp. Is it possible that Facebook is overpaying for its latest purchase? Sure. And it's not wrong for investors or analysts to focus on those numbers. But only looking at the numbers confines Facebook in a predetermined social-media box. Investors need to see that if Facebook wants to be around a decade from now, it will need more than status updates surrounded by daily deal ads. Facebook isn't just a social-media service; it's a social-media company. And buying WhatsApp is its latest way of keeping that company relevant.

Fool contributor Chris Neiger has no position in any stocks mentioned. The Motley Fool recommends Facebook, Google, and Twitter. The Motley Fool owns shares of Facebook and Google. We Fools may not all hold the same opinions, but we all believe that considering a diverse range of insights makes us better investors. The Motley Fool has a disclosure policy.