2014 will see the release of some absolutely massive games. Which five titles are set to make the biggest splash in the first half of the year? 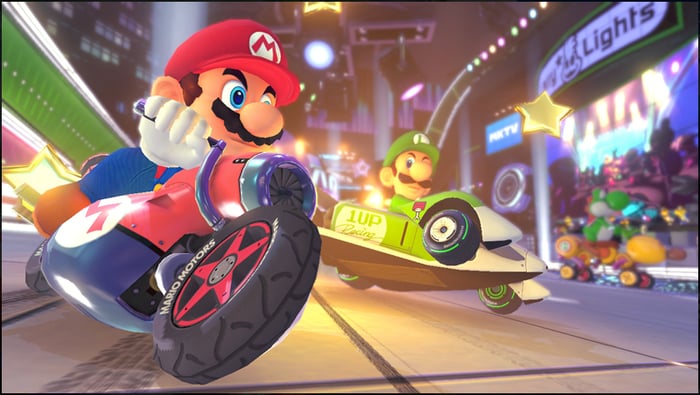 Indie games may be more popular than ever before, but it's triple-A software that is still driving the traditional games industry. With the launches of new hardware and software sales in decline over the last couple of years, hopes have turned to the big games of 2014 to keep the industry on a healthy trajectory.

The rising cost of game development and the collapse of mid-tier publishers means that there are fewer retail releases than ever before. That hasn't made competition any less fierce. The games on this list are titles that absolutely must succeed in order for the companies behind them to keep or improve their place in the industry. Here are the five biggest games scheduled to launch in the first half of 2014.

5. Mario Kart 8
As the sequel to the incredibly successful Mario Kart Wii, there is a lot of pressure on Mario Kart 8 to perform. While the Wii U has the obvious trappings of a system that is beyond saving, Nintendo (NTDOY -0.19%) still needs a strong performance from the latest "Mario Kart" title. The game will launch on May 30 and stands as the most graphically impressive game on Nintendo's new platform. It may be the Wii U's last chance to establish some momentum.

Mario Kart Wii has sold more than 35 million copies, reaching approximately a third of the Wii user base and cementing its position as one of the best selling games of all time. As an unfortunate result of the Wii U's near-death status, the upcoming sequel will face one of the biggest sales drop-offs in the history of gaming. Still, Mario Kart 8 is likely the most important game for Nintendo in 2014.

4. The Elder Scrolls Online
"The Elder Scrolls" was one of the defining series in the last hardware cycle. While Japanese developers and publishers failed to deliver in what used to be their signature genre, Western studios like Bethesda stepped up to create the new generation of role playing games.

The Elder Scrolls Online looks to be the biggest MMO release since World of Warcraft from Activision Blizzard. The game will debut on PC and Mac on April 4 and land on the Sony (SONY -1.37%) PlayStation 4 and Microsoft (MSFT 0.13%) Xbox One sometime in June. The success or failure of its subscription-based model should provide an indication of if such models are still viable for future MMOs.

3. Dark Souls 2
The "Dark Souls" series from Bandai Namco is the most important new IP to come out of Japan in the last five years. Blending elements of old school and new school game design, the game also successfully melds Japanese and Western styles. With the right marketing, the game has the potential to explode and expand the series' audience.

Scheduled for a March 11 release on PS3 and Xbox 360, Dark Souls 2 looks to be the game to propel the franchise to mainstream mega success. According to consumer interest tracking from Gamespot Trax, more gamers are aware of Dark Souls 2 than any other title releasing this year.

Originally planned for a holiday 2013 release on almost every platform under the sun, Watch Dogs has become Ubisoft's (UBSFF 8.07%) most important game of 2014. Reception to the title couldn't have started out hotter, but the delay mixed with rumors and doubts about the its quality have dampened the game and Ubisoft's outlook. Still, Gamespot Trax data suggests that the game is the most anticipated of 2014.

When Watch Dogs finally debuts, comparisons to Take-Two Interactive's megaseller Grand Theft Auto 5 are inevitable. The favorability of these comparisons will be a major factor in Ubisoft's future outlook. The company desperately needs the new IP to be a hit.

1. Titanfall
Titanfall from Electronic Arts (EA 0.50%) may not wind up being the most commercially successful game on this list from a pure dollars perspective. Given that Watch Dogs is set to launch on twice as many platforms, this shouldn't be surprising. No game in the first half of the year looks to be as influential as Titanfall, however. The title has the potential to reshape the first person shooter genre and it's set to arrive at almost the perfect time in Xbox One's lifecycle.

TitanFall will launch on Xbox One and PC on March 11, with an Xbox 360 version of the title set to debut on March 25. With Microsoft's Xbox One falling behind sales of Sony's PlayStation 4, the high-profile shooter will be instrumental in attempts to reverse this trend. The game is one of Microsoft's greatest assets in the console wars.

Titanfall dwarfs the competition
The first half of 2014 is shaping up to be a very interesting period for the gaming industry. Companies like Ubisoft, Microsoft, and EA will see the release of massively important titles that look to shape their respective gaming businesses for years to come. Interestingly, Sony's output in the first half of the year looks comparatively weak. Games like Infamous: Second Son and DriveClub may deliver quality experiences but neither can match TitanFall in terms of stature. Whether or not this advantage is enough to court gamers away from the red-hot PlayStation 4 remains to be seen.

Keith Noonan has no position in any stocks mentioned. The Motley Fool owns shares of Microsoft. We Fools may not all hold the same opinions, but we all believe that considering a diverse range of insights makes us better investors. The Motley Fool has a disclosure policy.