With a solid modem in hand, Intel should fight aggressively to get inside the iPhone.

Back in 2010, Intel (INTC -1.11%) announced that it would be acquiring the assets of the struggling Infineon Wireless. Intel recognized that it would need to have in-house cellular baseband and RF transceiver capability if it were to become a viable player in the smartphone and tablet chip market.

Intel actually didn't pay all that much for it -- a mere $1.5 billion -- but it came cheap because it was in pretty bad shape. After three years, Intel may finally be in a position to win a big-ticket phone, such as the Apple (AAPL -1.96%) iPhone.

Intel can target a number of Apple's many SKUs
Looking at the specifications of Intel's XMM 7260, it seems that it is a competitive product with Category 6 LTE-Advanced support. The only deficiency that it seems to have regarding the upcoming Qualcomm (QCOM -1.36%) MDM9x35 is that it doesn't support the CDMA standard. While this may seem like a problem, it's important to understand that Apple has no less than five SKUs of its highest-end iPhone 5s, three of which don't offer or require CDMA support. 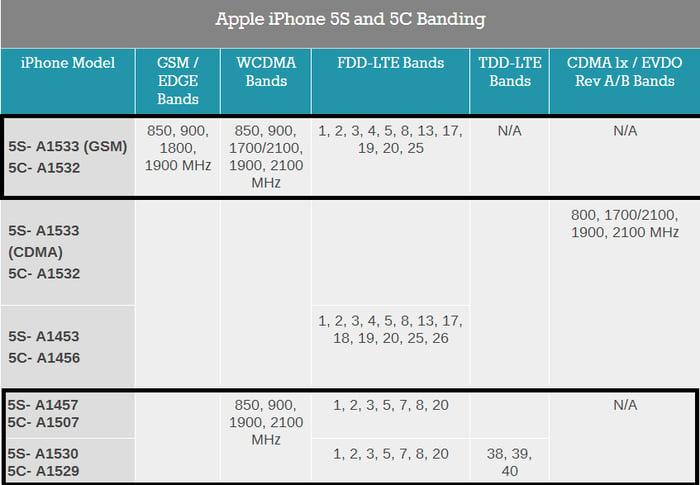 Apple is probably going to use Qualcomm for all of its high-end iPhones, CDMA or not. But it is very possible that Intel could end up powering the non-CDMA versions of the successor to the iPhone 5c, as Intel is probably going to be very aggressive with the pricing of its chips. This would not only be a win for Apple, but it could be a win for Intel, as winning a baseband socket might be more lucrative than winning a portion of Apple's A chips as part of a foundry deal.

Long-term, this is the Apple account worth fighting for
Over the long haul, Intel's best shot at penetrating Apple and Samsung will be via stand-alone cellular baseband processors, as the two heavyweights seem to be keen on developing their own applications processors. Competing with Qualcomm is tough business -- and Broadcom appears to be emerging as a viable contender for non-CDMA baseband sockets, although it seems to be behind Intel as far as timing goes. But Intel is finally in a position to start fighting for this business, something that Infineon Wireless as a stand-alone entity was not able to do.

Having some non-trivial percentage of Apple's baseband business and then a decent percentage of the non-Apple/non-Samsung smartphone applications processors isn't bad business by any measure. Smartphone revenue for Intel may not ever come close to what Intel gets on the PC side of things, but this is fantastic incremental business and could drive some nice long-term growth.

Foolish bottom line
So this is interesting from a number of angles. Intel, the company known for missing mobile, will finally be able to compete for a socket at Apple. Qualcomm, for the first time in a long time, sees competition at the leading edge of the baseband market, and Apple gets to pit the suppliers against each other in order to get a better cost structure. Interesting times are ahead for all involved.