Diamondback Energy produces oil from the Permian Basin of Texas. Its stock has risen 200% over the past year. Here's what the company is doing and how it differs from two similar competitors.

After its debut as a public company in October 2012, Diamondback Energy's (FANG -2.38%) stock has gone up more than 200% in the past year alone. An independent energy producer with a market capitalization of about $3 billion, the company currently sells for more than 82 times trailing earnings. What is Diamondback doing right, and how does it compare to two other similar-sized oil and gas companies?

Focused on the Permian Basin
Diamondback generates income by finding and producing oil and natural gas from established plays in the Permian Basin of Texas. Specifically, it operates in the Wolfberry Trend, a geological formation that encompasses a variety of oil plays, including Wolfcamp, Spraberry, and Atoka.

This focus on one oil play resembles the strategy of SandRidge Energy (NYSE: SD) and Kodiak Oil & Gas (NYSE: KOG). As the chart below illustrates, while all three companies have similar market capitalizations and generally focus on developing one oil play, Diamondback's stock has conspicuously, ahem, outperformed the others. How is Diamondback doing it? 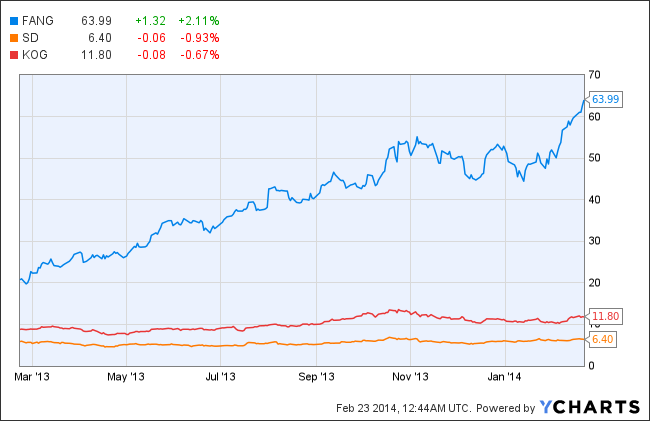 Rapid production growth and more
According to Diamondback's latest investor presentation, oil production was relatively flat in 2012. Things changed in 2013 when Diamondback began using horizontal drilling and hydraulic fracturing. Oil and gas production rose 149% year over year for 2013, and the company projects a 112% increase in production for 2014. Roughly three-quarters of this production is oil; the rest is natural gas. The company claims this is the highest oil-to-gas ratio of its peers. Further, its growth in proven reserves is also heavily skewed toward oil.

On top of all this, the company's operating expenses declined over the past three years. Specifically, in 2012, the cost of production was $27.83 per barrel of oil equivalent (BOE). At the end of 2013, costs were $15.59 per BOE. For 2014, Diamondback projects $14.98 per BOE. Declines in lease-operating costs and general and administrative expenses were the main factors in the overall decline in expenses.

As a result, earnings went from a loss in 2012 to a profit of $1.29 per share (diluted) for 2013. If Diamondback delivers on its projected production for 2014, those earnings should go significantly higher.

So what about the others?
SandRidge pursues a similar business strategy in that it produces oil from one location, namely the Mississippian Lime in Oklahoma and Kansas. This lime is well known for holding oil, but its geology is such that traditional vertical wells made production uneconomical. SandRidge uses horizontal drilling and extensive surveying of the Mississippian formation to tap into these oil reserves. SandRidge also has an extensive wastewater (aka "produced water") disposal and electricity infrastructure in place to further reduce its costs.

SandRidge recently sold its interests in producing Gulf of Mexico assets to further its investment in the Mississippian Lime. Some might question the wisdom of selling productive assets when Mississippian production is so variable. That SandRidge took a loss on the transaction adds to the headscratching.

Kodiak drills for oil primarily in the Bakken oil play. It also works the Vermillion natural gas play in Colorado, but this is clearly secondary to Bakken oil. Bakken oil production soared over the past few years, and Kodiak is right in the thick of it. According to its latest investor presentation, Kodiak produced 601 BOE a day in 2009. In 2013, production was 29,200 BOE a day, and 2014 forecasts are for 42,000 to 44,000 BOE a day.

Like SandRidge, Kodiak will announce its earnings this Thursday. Unlike SandRidge, insiders sold off more than 1 million shares in December. Was this tax-related selling or something else? Perhaps we will find out by the end of the week.

One perplexing aspect of Kodiak is the rise in production and revenue don't necessarily match earnings. As the chart below shows, revenue of late climbed admirably and earnings declined. This is in the face of declining drilling expenses and increased production. Hopefully Kodiak will report rising earnings and revenue this Thursday. 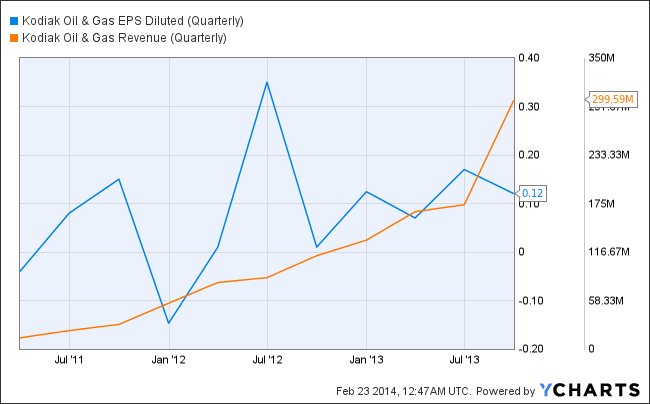 Kodiak picked a good place to drill for oil judging by its production record. However, that growing production doesn't translate into consistently growing earnings. Add the mystery of insider selling of late, and it's not surprising investors aren't embracing Kodiak like they do Diamondback.

Does Diamondback deserve its rich valuation? If its production growth continues and its earnings keep up, yes, Diamondback should reward investors well. Be advised, however, that an earnings disappointment could clobber the stock.

Robert Zimmerman owns shares of SandRidge Energy. Robert also owns the following options: Short March 2014 $6 puts on SD, Short June 2014 $6 calls on SD. The Motley Fool has no position in any of the stocks mentioned. We Fools may not all hold the same opinions, but we all believe that considering a diverse range of insights makes us better investors. The Motley Fool has a disclosure policy.