Doom and gloom sells well, but it is very unlikely that the U.S. is going to implode from $10 gasoline anytime soon.

There has been much talk of late that the world is running out of cheap, accessible oil. Discussion of oil shocks, stagflation, and gasoline shortages make tomorrow look like a zombie apocalypse in the making. In reality there are a number of encouraging developments in the North American oil industry that should keep a lid on prices. 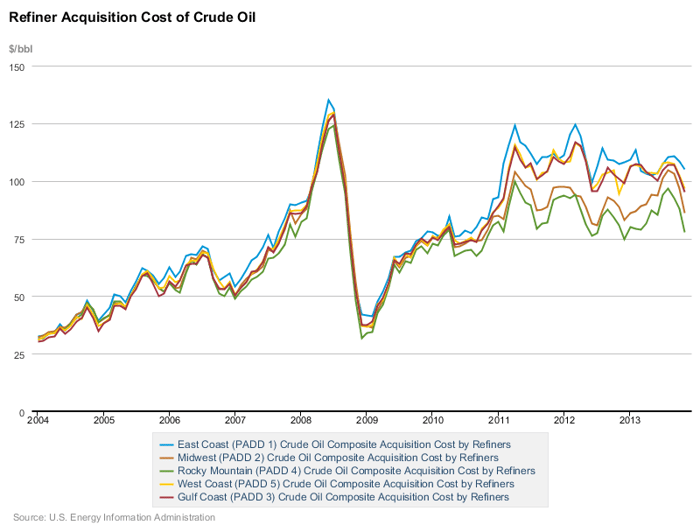 At the beginning of this century U.S. refiners paid similar prices for oil regardless of their location. U.S. production growth changed all of that and in 2011 PADD 2 and PADD 4 started trading at discounts to other regions. This is a big problem for U.S. consumers as PADD 3 contains more than half of all U.S. refinery capacity.

The U.S. can enjoy lower gasoline prices simply by expanding midstream infrastructure. Crude oil comprises 68% of the cost of U.S. gasoline, so decreasing the cost of crude oil is a big help at the pump. Enbridge (ENB -0.11%) and its MLP Enbridge Energy Partners, L.P. (EEP) have partnered with Marathon Petroleum (MPC -0.34%) to build the $2.6 billion Sandpiper pipeline from the Bakken to Enbridge's main system.

The hidden price ceiling
Building new pipelines is a straightforward way to decrease short-term prices, but there are other long-term forces at play. High prices have changed the entire U.S. transportation industry and pushed adjusted fuel economy from below 20 MPG in 2004 to 24 MPG in 2013, a more than 20% fuel efficiency increase.

High prices decrease consumer demand and promote the production of alternative fuels. Valero (VLO -0.20%) is a major ethanol producer and in 2013 alone its ethanol division produced $491 million in operating income. Politics did play an important role in the rise of ethanol, but it should not be overlooked that high oil prices have helped ethanol replace 10% of our gasoline consumption.

In 2014 Valero has $3 billion allocated for capex projects. If gasoline prices were to increase significantly there is no reason why Valero couldn't expand its production into alternative refining techniques like pyrolysis. KiOR is a small company with a $125 million market cap trying to perfect this technique to create a crude oil substitute from biomatter. KiOR still needs to prove commercial viability, but Valero could easily devote a small portion of its capex to buy KiOR and bring its development in house.

The Foolish bottom line
New pipelines are being built to help bring down oil prices, cars are becoming more efficient and alternatives fuels are being developed. All together these factors mean that $10 per gallon gasoline is not likely. Even if an oil shock were to send gasoline to $10 per gallon for a sustained period of time, it would only supercharge the development of renewable alternatives like pyrolysis. The low probability of $10 per gallon gasoline is great news for energy investors as a slowly evolving status quo means safety, stability, and dependable incumbent growth.

The numbers
The midstream firm Enbridge Partners is a great example. It is shifting more and more of its income to safe take-or-pay based contracts. It expects that by 2016 these safer contracts will represent 60% of operating income. Additionally Enbridge Partners expects 2% to 5% annual distribution growth. If you don't want to deal with MLPs you can also look at Enbridge Inc, the owner of 21% of Enbridge Partners.

The refiners Marathon and Valero are taking active roles in developing the midstream infrastructure required to give them better access to cheap oil. Marathon is putting up $1 billion to $1.2 billion for Sandpiper in exchange for a 27% to 30% equity stake. 45% of Valero's 2014 capex is for logistics, including funds to prepare it for Enbridge's 9B reversal. These midstream investments will help Valero and Marathon get a hold of cheap oil and boost their margins.

Joshua Bondy has no position in any stocks mentioned. The Motley Fool recommends Enbridge Energy Partners, L.P.. Try any of our Foolish newsletter services free for 30 days. We Fools may not all hold the same opinions, but we all believe that considering a diverse range of insights makes us better investors. The Motley Fool has a disclosure policy.