Please ensure Javascript is enabled for purposes of website accessibility
Log In Help Join The Motley Fool
Free Article Join Over 1 Million Premium Members And Get More In-Depth Stock Guidance and Research
By Matthew DiLallo - Feb 26, 2014 at 11:00AM

High yielding oil and gas producer BreitBurn Energy Partners L.P. (BBEPQ) is expected to deliver its fourth-quarter and full-year results on Thursday Feb 27. That report should wrap up what turned out to be a pretty good year for the company, despite some worries early on. Let's take a closer look at a few areas investors should keep an eye on when BreitBurn Energy Partners reports.

Distribution coverage ratio
Last quarter BreitBurn Energy Partners reported a robust distribution coverage ratio of 1.3 times. This is an important number to keep an eye on as it can fluctuate. For example, Legacy Reserves LP (LGCY), reported a higher coverage ratio in the third quarter at 1.31 times only to see its ratio fall to just 0.96 times in the fourth quarter. One company that has been doing a good job keeping its ratio stable is Vanguard Natural Resources, LLC (NASDAQ: VNR). Last quarter its rate was 1.09 times, and its coverage ratio has remained above 1.0 times all year. Overall, Vanguard Natural Resources is known for being one of the most conservative upstream MLPs, which is certainty something Breitburn Energy Partners should strive for in the future.

That said, over the course of the year BreitBurn Energy Partners has really done a great job improving the worrisome rate the company reported in the first quarter. The company's oil-rich capital plan, when combined with its oil focused acquisition strategy really paid off. However, just as Legacy Reserves saw its coverage ratio slip, investors need to keep an eye on BreitBurn Energy Partners' ratio to make sure it stays well above 1.0 times.

How is the balance sheet holding up?
BreitBurn Energy Partners uses a fair amount of debt in order to fund both its drilling program and its acquisition strategy. The company's goal is to fund acquisitions with a blend of 50%-60% equity and 40%-50% debt. However, lately the company has been using more debt to fund its growth as its unit price took a big hit earlier in the year.

This past quarter, however, BreitBurn Energy Partners did finally issue additional equity units in order to solidify its balance sheet after paying for a major oil deal with its credit facility. It's likely not done issuing equity and might need to raise more capital again soon as it just closed another deal that was also funded with its credit facility.

The company's stated goal is to keep its debt to Adjusted EBITDA ratio to less than 3.0 times, which is the same rate that Vanguard Natural Resources and Legacy Reserves target. Investors should watch to see where the company's debt is in relation to its target ratio. Having a strong balance sheet is critical for BreitBurn Energy Partners continue funding its growth as it pays out most of its income to investors.

Capital expenditure plan
One of the reasons BreitBurn Energy Partners is considered less conservative than Vanguard Natural Resources is because of its capital spending plan. Vanguard Natural Resources only spends about 20% of its Adjusted EBITDA on capital spending each year, though that will rise after its last acquisition. BreitBurn Energy Partners, on the other hand spends much more than that amount, while also outspending Legacy Reserves as the following chart shows: 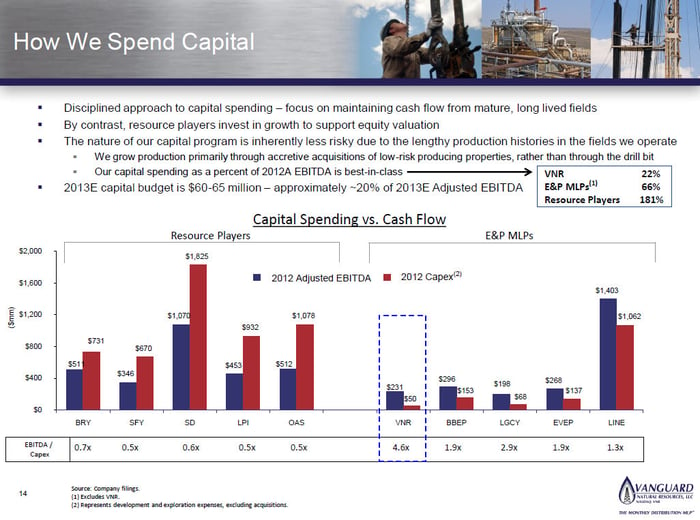 That move paid off for BreitBurn Energy Partners over the last year as its oil focused plan really delivered strong cash flow growth. Because of this investors will want to make note of what the company plans to spend in 2014. Does it plan on spending more than the $270 million it spent in 2013? If so, will it again focus on oil-rich opportunities? These are areas that need to be monitored as the company needs to fund its production growth and also grow its distribution to investors while not going overboard on its debt levels.

Investor takeaway
While I'm expecting a rather solid quarter from BreitBurn Energy Partners, the distribution coverage ratio, balance sheet and 2014 capital plan still are the areas that need to be monitored closely. The biggest areas to watch is to see if it gets more aggressive on its capital plan as that could yield a bigger increase to its distribution, while also weighing down its balance sheet.

Matt DiLallo has no position in any stocks mentioned. The Motley Fool recommends BreitBurn Energy Partners L.P.. Try any of our Foolish newsletter services free for 30 days. We Fools may not all hold the same opinions, but we all believe that considering a diverse range of insights makes us better investors. The Motley Fool has a disclosure policy.