One of the fastest-growing Internet populations is now available to Google's ad partners.

Just because Google (GOOGL 0.74%) doesn't dominate the web search market in every country doesn't mean it can't tap into some lucrative display ad inventory. On Wednesday, the Internet giant announced a partnership with Russia's leading search engine, Yandex (YNDX -6.79%), wherein each company will gain access to the other's ad inventory.

The move should prove mutually beneficial for the search companies, and is another step for Yandex to improve its platform and grow its international presence after partnering with Facebook (META 0.50%) last month. 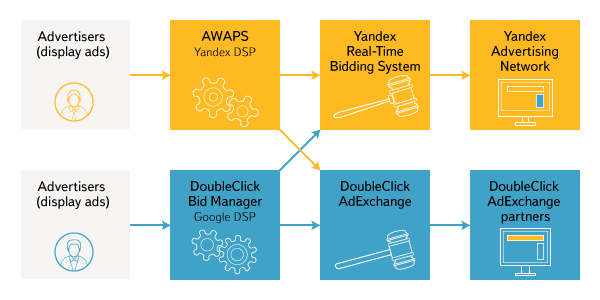 Google gains access to a wider audience
Despite the size of the Russian Internet population, 72 million, the country is connecting people at a rate faster than every other European nation, besides Italy. Yandex claims that its ad network covers 96% of the growing audience. With this partnership, Google's advertising partners can access that valuable audience without the need for Google to forge new relationships with Russian publishers.

Currently, Google has only a 27% share of the Russian search market, compared to Yandex's 62% share. The growth in mobile is helping Google expand market share slowly, as its search engine is typically the default on most Android devices. Yandex is fighting back, however, and recently announced plans to release its own fork of Android that features Yandex-branded apps and defaults to its search engine.

As each company battles for market share, however, Yandex and Google stand to gain in the short-term from additional bidding on their ad exchanges. Basically, Google is hedging its bet that it can overtake Yandex in Russia, particularly in sourcing publishing partners.

Yandex goes global
Yandex expects that this new partnership will allow its ad inventory to "increase dramatically." This includes inventory in countries where it operates, but doesn't hold a majority share of search or a sizable chunk of the display ad market. This may help keep current advertising partnerships intact with Yandex over a more global operator like Google.

Outside of Russia, Yandex currently operates in Turkey, Belarus, Ukraine, and Kazakhstan. In Turkey, the company is best known for its maps and navigation app, which isn't particularly monetizable. It has just 4% of the search market in the country, according to ComScore. Turkey is an important test for the company's global expansion efforts.

Yandex has already overtaken Google in Belarus, but the market is so small that it's almost insignificant to each company's revenue. It is a sign, however, that Google can be overtaken by focusing on the creation of a better product.

Best frenemies
Google isn't particularly threatened by Yandex, certainly not as much as Yandex is threatened by Google. Yandex is a much smaller company, but holds valuable ad inventory that Google is now able to utilize in exchange for access to its own, much larger inventory of display ads.

The partnership with Google not only gives Yandex's partners access to additional international ad inventory, but it should also increase Yandex's ad prices. A larger number of bidders (both Yandex's and Google's partners combined) bidding on the same number of ads from Yandex's inventory should, theoretically, improve ad prices. The same is true for Google, except the increase would be less significant.

Adam Levy has no position in any stocks mentioned. The Motley Fool recommends Facebook, Google, and Yandex. The Motley Fool owns shares of Facebook and Google. We Fools may not all hold the same opinions, but we all believe that considering a diverse range of insights makes us better investors. The Motley Fool has a disclosure policy.