Despite selling off a big chunk of itself to raise capital, Safeway might not be able to thrive without outside help.

Investors love stocks that consistently beat the Street without getting ahead of their fundamentals and risking a meltdown. The best stocks offer sustainable market-beating gains, with robust and improving financial metrics that support strong price growth. Does Safeway (NYSE: SWY) fit the bill? Let's take a look at what its recent results tell us about its potential for future gains.

What we're looking for
The graphs you're about to see tell Safeway's story, and we'll be grading the quality of that story in several ways:

What the numbers tell you
Now, let's take a look at Safeway's key statistics: 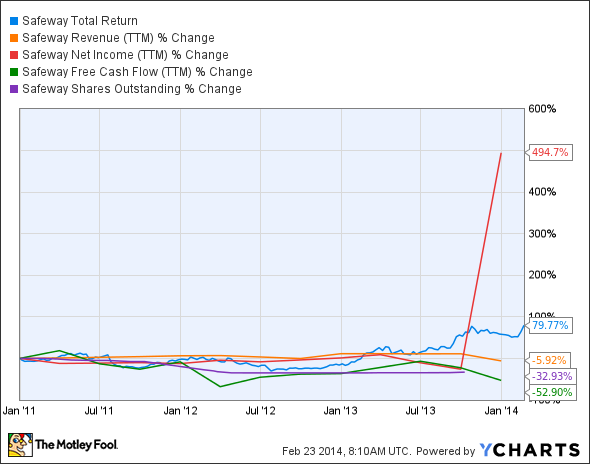 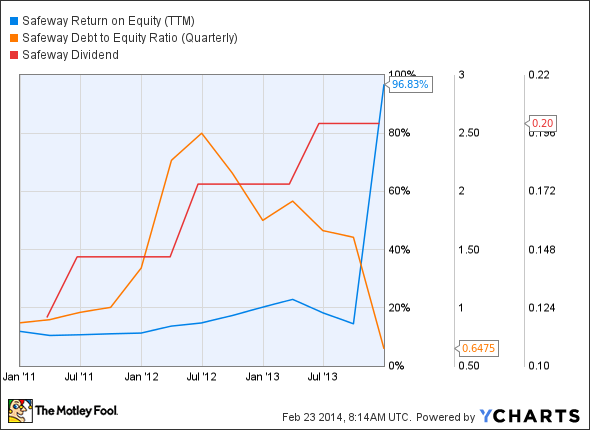 How we got here and where we're going
Safeway got off to a solid start, but despite a huge boost in earnings from the sale of its Canadian operations, the grocery chain is far from perfect -- revenue growth has never looked particularly strong and has been on the decline lately, while free cash flow shows a much weaker profit picture than that painted by net income. However, Safeway still racked up seven out of nine possible passing grades, and it does have an outside chance to post a legitimate perfect score when we examine it next year. How might Safeway restore its revenue to a growth footing? Let's dig a little deeper to find out.

Safeway reported lackluster revenue and earnings per share in its latest quarter due to fierce price competition from geographic competitors Kroger (KR -1.74%) and Wal-Mart. These two retail giants have aggressively expanded their grocery presence in the past few years, which has put Safeway and other supermarket chains under higher pressure. Kroger expanded into Safeway's core Southeast and Mid-Atlantic regions with its acquisition of Harris Teeter, which brought more than 200 stores into the Kroger fold. Kroger has already begun replacing its double-coupon policy with low prices and weekly offers, which will further pressure Safeway's revenue and profit margins. Fool contributor Zahid Waheed points out another new threat to Safeway's profitability from German-based discount chain Aldi Group, which plans to open nearly 650 stores in the U.S. by 2018.

At the same time, Safeway sold its Canadian operations to Sobeys for $5.8 billion to refocus in the U.S. markets, which accounted for the big boost in earnings on the charts above, but which is likely to tamp down revenue growth. Safeway also decided to exit the Chicago market by selling all Dominick's locations. Meanwhile, SUPERVALU (SVU) also sold more than 900 stores to private equity player Cerberus Capital Management for approximately $3.3 billion. The grocery market is at once consolidating and divesting itself -- if Safeway can't use its big sale windfalls to revitalize its core U.S. operations, it could wind up in SUPERVALU's untenable position of holding too many poorly performing and outdated stores as rivals push forward with upscale or lower-cost alternatives. While it's sold off significant chunks of itself, Safeway has also been expanding with an apartments-over-stores format in several markets. This will take some time to play out, but it could generate more consistent sales -- who'd want to drive across town for Kroger when Safeway is an elevator ride away?

Fool contributor Jeremy Bowman notes that Safeway has been making various strategic moves to boost shareholder value, refocusing on core operations and increasing its share-repurchase programs. The company has recently escalated its negotiations with Cerberus for a leveraged buyout, which could be completed within the next few weeks. Safeway also decided to distribute around 72.2% of its outstanding shares of Blackhawk Network Holdings to Safeway stockholders on a pro rata basis and has been looking to monetize its 49% interest in Mexico's Casa Ley. The company expects tax benefits of between $400 million and $450 million from its Chicago exit, which will be used for share repurchases, paying off debt, and other investing activities.

Putting the pieces together
Today, Safeway has many of the qualities that make up a great stock, but no stock is truly perfect. Digging deeper can help you uncover the answers you need to make a great buy -- or to stay away from a stock that's going nowhere.

Alex Planes has no position in any stocks mentioned, and neither does The Motley Fool.   We Fools may not all hold the same opinions, but we all believe that considering a diverse range of insights makes us better investors. The Motley Fool has a disclosure policy.