Everyone thought Google was crazy for trying to find solutions to major problems facing human health. So what will they say when they discover Google isn't alone in its ambitious quest?

"In this world nothing can be said to be certain, except death and taxes."
-- Benjamin Franklin

It will be awfully difficult to challenge the natural cellular processes that contribute to the death of a living organism, but no one said we couldn't try. Back in September, Google ( GOOGL 0.62% ) launched a secretive health-care company called Calico that "will focus on health and well-being, in particular the challenge of aging and associated diseases." Let's face it: Aggregating, interpreting, and acting upon vast samples of genetic data will be necessary to tackle the biggest problems facing human health today. Who better to do that than Google, which has access to the genetic vaults of 23andMe?

Well, there is this one guy.

World-renowned scientist J. Craig Venter -- the private hand behind the Human Genome Project, founder of the insanely innovative J. Craig Venter Institute, Synthetic Genomics, and SGI-DNA (a gene synthesis company) -- just tossed his hat into the ring. Venter announced the formation of Human Longevity, or HLI, the purchase of two HiSeq X 10 sequencing platforms from Illumina ( ILMN 1.77% ), the anticipated hiring of 100 new employees in 2014, and an initial investment of $70 million. The company wants to compile the world's largest database of genotype, microbiome, and phenotype information (each a type of genetic data). Sound familiar?

A new era of human health?
DNA sequencing has long been heralded as the driving force that will usher in a new era of medicine and personalized medicine. The rationale is quite simple: Your genome holds an incredible amount of valuable genetic information that affects and dictates how we age, which diseases we are susceptible to, and how long we will live. While certain diseases and traits are controlled by one or a handful of genes -- making them easier to study -- other diseases (dementia, autism) and traits (intelligence, how we age) are controlled by large groups of genes, making them much more difficult to study. The only way to reliably study diseases and traits controlled by multiple genes is to use really, really big sample sizes. Unfortunately, technology (and therefore cost) has been the limiting factor in our ability to study multivariate traits within large populations. 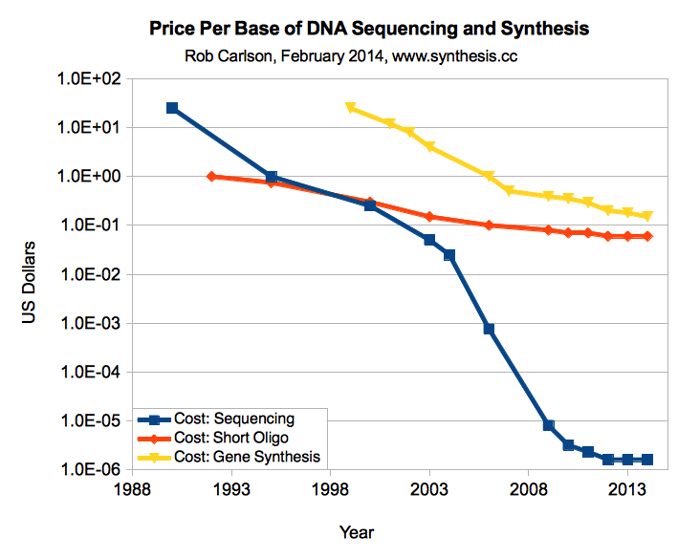 The price reflected is for finished sequencing and does not account for Illumina's latest announcement. Source: Dr. Rob Carlson / synthesis.cc.

Those days may soon be over, thanks to DNA sequencing breakthroughs from companies such as Illumina and data mining operations led by Google and now HLI. The HiSeq X Ten Sequencing System from Illumina, composed of 10 HiSeq X machines, sells for roughly $10 million, but can enable full human genome sequencing costs of $1,000 per genome and sequence thousands of human genomes per year. It represents a major breakthrough in DNA sequencing technology, but as Dr. Rob Carlson notes, sequencing costs likely won't budge until a competitor pushes Illumina to make further improvements.

At any rate, the $1,000 sequencing cost for a human genome is a major leap from the $3,000-$5,000 cost the industry is currently stuck at. It will enable a new era of human health by allowing companies to stretch research dollars and sequence 3 to 5 times more human genomes for the same price. For instance, HLI intends to sequence up to 40,000 human genomes per year initially and then expand its capacity to 100,000 human genomes annually thereafter. To put that in perspective, the world has only sequenced approximately 100,000 human genomes to date. Ever.

Opening the flood gates of DNA sequencing means health care companies will gain access to more genetic data, which will be used to study elusive and non-obvious genetic links for various diseases and traits. Google's Calico and Venter's HLI will both build and attempt to monetize large databases, but which can do it better? Are the two even direct competitors?

Google vs. Venter?
Many speculated that Google was trying to make human life invincible, but the true goals will revolve around acquiring a better understanding of age-related genetics and the diseases and traits that are dictated from it. Google CEO Larry Page didn't bottle his enthusiasm when the formation of Calico was first announced last September, saying:

[Chairman and former CEO of Genentech Arthur Levinson] and I are excited about tackling aging and illness. These issues affect us all—from the decreased mobility and mental agility that comes with age, to life-threatening diseases that exact a terrible physical and emotional toll on individuals and families. And while this is clearly a longer-term bet, we believe we can make good progress within reasonable timescales with the right goals and the right people.

Meanwhile, Venter's recent HLI announcement also explicitly stated that lengthening life was not necessarily the immediate goal, but rather "extending a healthier, high performing, more productive life span." While it may be difficult for most investors to bet against Google, consider that Venter has an extensive network and living brain trust of investors, life sciences gurus, and technical experts to leverage to make HLI a success. The new company is also working closely with Illumina in its epic quest: The sequencing leader is a strategic investor in HLI and located just blocks away from the start-up in San Diego. It also reserves the right to purchase an additional three HiSeq X Ten Sequencing Systems to significantly boost its sequencing capacity. (This is almost a necessity given the rough numbers presented. If each system sequences 20,000 human genomes per year, then five systems will be needed to get to the stated sequencing capacity goal of 100,000 human genomes per year. HLI currently owns two systems.)

All right, so we know how HLI plans to quickly sequence human genomes and build its genetic database, but how will HLI monetize that database? Well, that's the tricky part. The hope is that by significantly increasing the amount of fully sequenced human genomes available to academic and pharmaceutical researchers worldwide, we'll be able to discover currently unknown links between human health and genes and/or the microbiome (the collection of bacteria populations residing in your gut). While it's speculative at the moment, I don't think HLI or Calico are wasting their time or money with their business plans. Given the tremendous amount of information waiting to be uncovered it's only a matter of time before someone stumbles upon a major discovery. For the very same reason, it seems reasonable to think that the opportunity is large enough to support multiple companies. I don't see Calico's success coming at the expense of HLI, or vice versa.

Foolish bottom line
There's a lot to cover here and plenty to dive into in future articles. However, it's difficult to not be optimistic about the future of health care. Should Calico and HLI be successful in their efforts to better understand and eventually treat age-related diseases, then modern health care systems could be relieved of significant cost burdens. That would drastically lower the bill for post-industrial health care spending, which would inevitably trickle down to the consumer. Your genome contains a great deal of information -- and information that can better protect or cure you from ailments that will affect you throughout your lifetime. It's about time we use that to your benefit, don't you think?