Few investments have paid off as handsomely as Insys (NASDAQ:INSY) this past year. The company, which gets most of its sales from breakthrough pain treatment Subsys, has soared more than 700% in the past year. 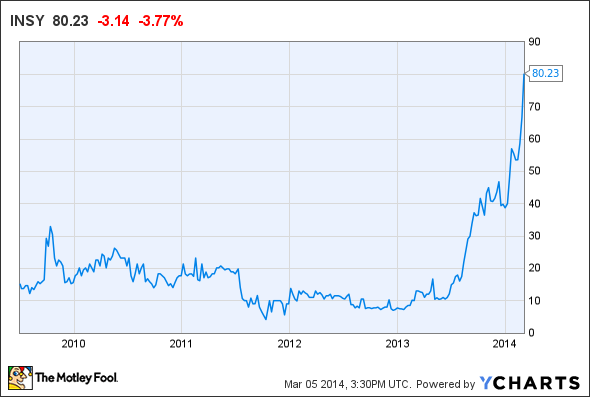 Winning against established therapies
Subsys is taking business from Actiq and Fentora and other generic versions of fentanyl, which was previously the most heavily prescribed treatment for breakthrough pain in opioid tolerant cancer patients.

But while Subsys sales momentum is impressive, investors should remain cautious given Insys is now valued at $1.7 billion, which is a bit more than 10 times its annualized fourth quarter sales run rate.

Investors may argue Insys is worth the premium because it's just getting started, and it has drugs still coming down its pipeline. But given M&A deals have most recently been done in the seven to ten times sales range, including Actavis' acquisition of Forest Labs and Shire's acquisition of ViroPharma, a bit of skeptism may be warranted.

One advantage Insys does offer investors over other small and mid cap biotechnology companies is profit. The combination of Subsys revenue growth and cost-consciousness helped sales translate into $0.71 in earnings per share during the fourth quarter (after adjusting for a one-time tax benefit).

Those earnings are coming even as the company prepares to file for approval of a second product, an oral formulation of its generic Marinol capsules. That drug is based on THC, the psychoactive compound found in marijuana, and it's used to treat nausea caused by chemotherapy, and to restore appetite in AIDS patients.

Nonetheless, investors should keep an eye on the R&D expense line given Insys plans to file for four IND's this year. That means expensive human trials could cut into its bottom line in 2015.

Investors should also watch to see whether those earnings end up boosting Insys' cash hoard, or if expenses end up drawing cash down. Insys is debt free and had $45 million in cash exiting 2013. If cash does fall, investors may face dilution in the form of a secondary stock offering given the lofty share price.

Fool-worthy final thoughts
The market for pain killing treatment for cancer patients is worth more than $3 billion and is expected to grow to more than $5 billion by 2018, according to Worldwide Marketing Research. If that forecast proves correct, Subsys could have plenty of room for sales growth that may justify its current valuation.

However, forecasts are prone to error, and new compounds could eventually challenge Subsys, suggesting investors should keep a close eye on quarterly results. Once sequential growth stalls, investors will likely shift their attention to the pipeline. Investors should also watch to see whether an ongoing FDA investigation into Subsys sales tactics taxes the balance sheet. A similar investigation into Teva resulted in a $425 million fine.