Zynga (NASDAQ:ZNGA) COO Clive Downie took to the official blog on Monday to announce forthcoming mobile-friendly -- or friendlier -- versions of some of the social gaming company's top franchises. The move comes as the company struggles to retain users and faces the IPO of competitor King, which performs better on mobile platforms. Will the redesigns help Zynga attract more players?

Mobile monetization has proven tricky for tech companies with even Facebook (NASDAQ:FB) earning scorn post-IPO for its difficulties. Facebook proved detractors wrong and in the recent fourth quarter reported that 53% of its ad revenue came from mobile -- and ad revenue accounted for 90% of the $2.59 billion in revenue.

But Zynga derives a small portion of revenue from ads with most of its monetization coming from in-app purchases. The company has done well at keeping the percentage of paying players steady regardless of user volume, but that percentage is half of King's similar metric.

Can mobile versions of popular titles up Zynga's monetization game?

The Farmville family will gain a mobile spinoff called Farmville 2: Country Escape, which will sync with a players achievements in the Facebook platform version of the game and allow for offline play. Downie wrote that Country Escape will "[redefine] the FarmVille social experience with new Social Control options that give you more choice on how you connect with friends and family."

Zynga Poker's reimagination aims to make the title "a mobile-first game with more personalized gameplay." Poker was released in 2007 and has retained a less obtrusive design than later titles, incorporating socialization and in-app purchases in a more organic manner. The New Zynga Poker will make it easier for players to join tables with real-life friends and adapt around a player's skill when seeking random table assignments. A screenshot on Downie's post shows that the new version also improves upon the old's somewhat dated graphics. 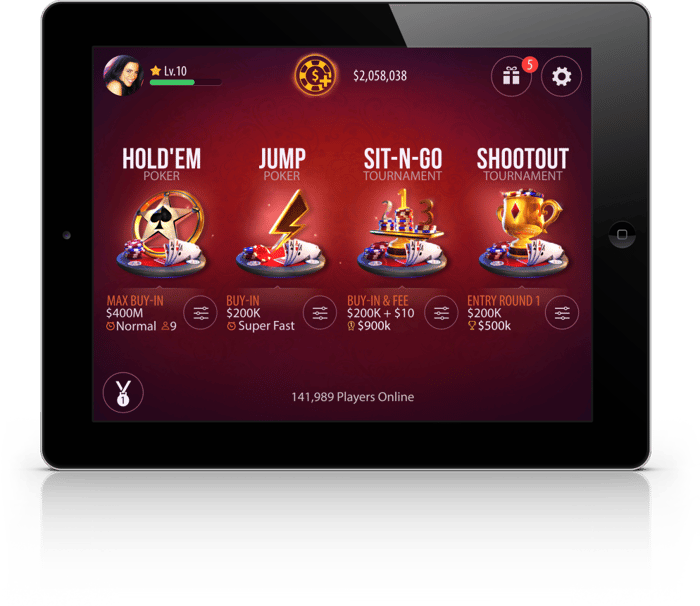 The least impressive announcement was the updates to Words with Friends. Zynga's adding an improved dictionary that includes audio pronunciation, a stats-boasting player profile, and easier ways to connect with friends. The new version won't do much to make it seem less like a Scrabble clone but Words with Friends has continued to pull in impressive monthly active user numbers regardless.

And the monthly active users, or MAUs, numbers show why these three franchises were selected for an update.

Why these games?
Zynga has a player retention problem. In the fourth quarter, daily active users were down 52% year-over-year while MAUs were down over 62%. The company has remained steady at monetizing about 2% of players, but the resulting number shrinks as overall player volume decreases. And not all games are created equal when it comes to monetization.

Farmville 2, Zynga Poker, and Farmville accounted for over 60% of web revenues in the fourth quarter. Farmville 2 and the nearly seven-year-old Zynga Poker both pull in about 10 million MAUs on the Facebook platform with the original Farmville trailing behind at five million. Words with Friends also belongs to the 10 million MAUs club, but didn't account for much web revenues partly because the game was already more mobile-friendly than the other franchises.

Reinventing Farmville and Zynga Poker to become more mobile-friendlly increases the chances of attracting more players and potential monetization. Competitor King revealed in its IPO filing that 73% of the $632 million in fourth-quarter bookings came from mobile platforms. And since King has dropped ads that money all came from in-app purchases. The IPO also revealed that King's able to monetize about 4% of its players.

So monetization can happen through mobile platforms if the right games and incentives are in place. Zynga's making a smart move in branching off three of its most popular franchises-particularly Farmville and Zynga Poker, which remain web revenue powerhouses. Of course, the narrow focus won't help the fact that so few games account for so much of the revenue.

But King has an even larger problem in that area. Candy Crush Saga accounted for over three-quarters of the fourth-quarter's bookings. The game remains massively popular with about 93 million daily active users, but King noted that the bookings decline between third and fourth-quarters was due to a lowered number of Candy Crush players. And if the cyclical nature of social gaming popularity eventually claims Candy Crush as a victim, King's could find itself in a mortally wounded state.  [

Zynga's broader number of monetizing titles doesn't protect the company from also falling under the fickle nature of gaming. But Zynga also has a new acquisition that could redefine its position in the gaming world.

The NaturalMotion game-changer
Zynga's fourth-quarter report announced the acquisition of mobile gaming company NaturalMotion, which created the popular mobile games Clumsy Ninja and CSR Racing. But NaturalMotion also owns some impressive development tools including simulation technologies. The tools have uses in the movie industry and were used in some of the most popular console games in recent years including Red Dead Redemption and Grand Theft Auto IV.

The mobile redesigns of popular Zynga franchises could simply buy the company time to debut whatever it plans to do with NaturalMotion. And those results could end up as a game-changer that leave a dust cloud around King and other trendy freemium game developers.

Foolish final thoughts
The mobile-focused redesigns shouldn't impact Zynga's presence on the Facebook platform but could help the company with user retention and monetization. But the big story remains what Zynga will do with the NaturalMotion acquisition.