Power play
The AES Corporation unveiled a renewable energy game-changer this week. AES lifted the curtain on AES Advancion, "a complete battery-based grid resource." This latest iteration has been six years in the making and further bolsters AES' 200 MW of energy storage currently deployed or in construction.

While it might seem counterintuitive for power plants to need batteries, varying power supply and demand throughout the day makes batteries a very lucrative investment. Rather than fire up expensive "peaking power plants," electricity companies can instead rely on stored power from cheaper fuel sources.

Rocking renewables
While energy storage can cut costs for any utility, it's especially important for renewables. Solar power runs on sunshine and wind power on wind. So when the sun has set or breezes aren't blowing, these sources are useless. But The AES Corporation's storage technology lets energy companies store solar power for after-sunset peak hours, or for a slew of still weather.

Why Tesla Motors cares
Utility-level energy storage could be a major boost to Tesla Motors, for two reasons. First, Tesla Motors uses batteries in every single electric car it produces. Its recently announced "Gigafactory" has made battery production priority No. 1. Even as the automaker investigates super-fast battery swaps at conveniently placed stations, it would rather improve storage capacity itself.

As Tesla Motors prepares to produce its first mass-market vehicle, it's counting on its Gigafactory to reduce battery pack cost per kWh to drop at least 30% by 2017. 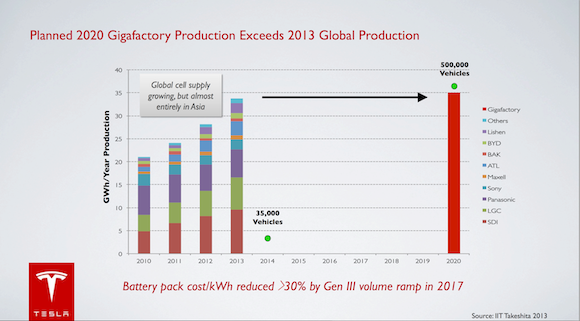 Tesla Motors may use smaller batteries than the AES Corporation, but by 2020 it will be able to produce the same number of lithium-ion batteries that the entire world manufactured last year. AES' six years of research and 1.5 MWh of service delivered are making major ripples on energy storage R&D in general, and Tesla Motors can ride the coattails of utilities advancing the cost-effectiveness and reliability of battery storage.

Source: Tesla Motors. The New Model S, like all Tesla vehicles, is marketed as "zero emission."

Tesla Motors also wants The AES Corporation to succeed so that its "Zero-Emissions" rhetoric can become reality. While Tesla autos are all electric, their electricity may come from carbon-intensive sources like petroleum, coal, or natural gas. Until every Tesla vehicle "fills up" its battery on electricity produced from renewable energy, zero-emission is only an aspiration.