Thanks to a promising late stage drug, Ophthotech may have a shot at challenging Regeneron (REGN) Eylea and Novartis' (NVS) Lucentis one day.

Two of the most highly successful compounds to win FDA approval in the past few years have been Regeneron's ( REGN 0.18% ) Eylea and Novartis' ( NVS 0.06% ) and Roche's ( RHHBY -0.33% ) Lucentis. Both drugs help improve vision in patients who are losing their sight due to age or diabetes.

For now, the two drugs face little competition; however, that may change over the next few years given Ophthotech ( ISEE -5.11% ) is working on a new treatment for age-related macular degeneration, or AMD. 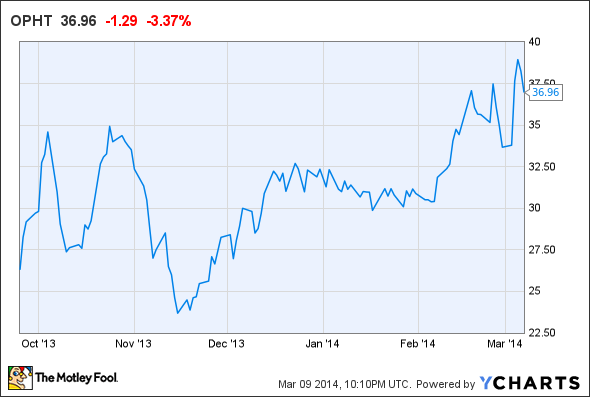 Advancing through clinic
Ophthotech was founded in 2007 by the founders of Eyetech -- the company behind Macugen, the first anti-VEGF therapy for the wet form of AMD. OSI Pharmaceuticals bought Eyetech in 2006 for nearly $1 billion to get its hands on Macugen, and Ophthotech was born a year later when it acquired Fovista from OSI.

It will be a while before we know if that trial succeeds given that its estimated completion date is in 2016, but if it does help improve vision at least as well as Lucentis or Eylea, Fovista could stand to capture a share of this multi-billion market.

What's the story?
Eylea is currently approved for two indications, the wet form of AMD, and vision loss tied to retinal vein occlusion, or CRVO. Combined, those two indications propelled the drug to global sales of $1.8 billion last year.

These drugs have become blockbusters because AMD is the leading cause of vision loss among people over 50 years. In those patients, the ability to control central vision erodes over time due to damage to the macula -- a small spot in the center of the retina responsible for seeing what's directly in front of us.

About 15 million people are currently diagnosed with AMD in the U.S., and about 10% of them are diagnosed with the wet form of the disease that Eylea and Lucentis treat. Given baby boomers are becoming seniors at a break-neck pace, the market demand for treatment is growing, rather than shrinking. Roughly 155,000 new cases of AMD will be diagnosed this year.

Building a better mousetrap
Eylea's every-other-month dosing is more patient friendly than Lucentis' once-a-month injection. That's helped Eylea quickly capture market share. However, Eylea may see sales grow even faster if the FDA approves the drug's application for use in DME later this year.  Especially since Eylea costs roughly $16,000 a year, or about $8,000 less than Lucentis.

That suggests Fovista will have to deliver better results, offer better dosing, or come with a cheaper price tag if it hopes to compete.

So far, results from mid stage trials suggest once-monthly Fovista may have an argument on the efficacy front. During phase 2, combining Fovista with Lucentis improved eyesight by 10.6 letters on a standard eye chart at 24 weeks. That was significantly better than the 6.5 letter improvement for patients receiving Lucentis alone. It's also arguably better, in terms of relative out-performance, than Eylea's phase 3 trials, which showed monthly dosing of Eylea improved vision by 10.9 letters, versus 8.1 letters for Lucentis.

Fool-Worthy final thoughts
Fovista could capture its fair share of the market if phase 3 results duplicate phase 2, and analysts seem to recognize this, as Stephen Willey of Stifel Nicolaus reportedly modeled for $3.5 billion in peak sales. However, results from that trial aren't expected for two more years.

Investors should also keep an eye on Zimura, another Ophthotech drug heading into late stage trials. Ophthotech expects to move Zimura into phase 2/3 trials this year to study its efficacy in geographic atrophy-- a severe form of dry AMD that accounts for about 20% of all dry AMD cases.

In Novo, Ophthotech has a well-heeled partner on Fovista, and the company has a war chest of over $200 million in cash, but it will still be years before investors know how these drugs performed in phase 3. That means Ophthotech shares carry a lot of risk, making them best suited for only the most speculative investor.

These Were the 10 Best Stocks of 2019
Bad News Bashes Biotech Investors... Again
Fovista Flops: What's Next?