When Berkshire Hathaway's Warren Buffett invests, the world watches. Such was the case with his acquisition of NV Energy (NYSE: NVE) last year -- a surprise move as most investors ignored utilities. In his latest shareholder letter, here are his five latest ideas on utilities.

1. "Though there are many regulatory restraints in the utility industry, it's possible that we will make additional commitments in the field. If we do, the amounts involved could be large." -- 1999 Annual Report

Warren Buffett is wise enough to look to the past in his latest Berkshire Hathaway letter. Fifteen years ago, Warren Buffett was already eying the opportunity of NV Energy. That sort of long-term vision is exactly what makes utilities excellent investments for patient investors: Invest. Wait. Enjoy Dividend. Reap long-term profit. Repeat.

2. Each company [MidAmerican Energy and BNSF] has earning power that even under terrible economic conditions will far exceed its interest requirements.

Utilities have drastically underperformed the S&P 500 over the past decade: 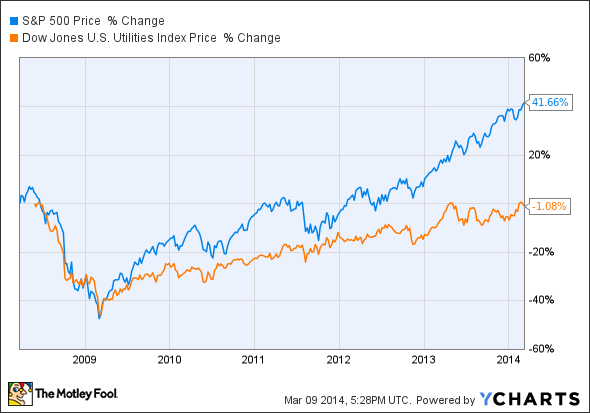 In the last five years (roughly the length of the recovery), the S&P 500 has gained 175%, compared to just 84% for the utilities. But share prices aren't always equivalent to value, and much of this sector's lag might be attributed to eager investors looking for big growth. Warren Buffett's better than that.

The oracle of Omaha points to "recession-resistant earnings" from utilities' "essential service" (electricity). And for MidAmerican and NV Energy, Buffett points out the added benefit of diverse earnings streams, shielding earnings from any overeager regulatory body.

3. Tangible proof of our dedication to that duty [to regulators and customers] was delivered last year in a poll of customer satisfaction covering 52 holding companies and their 101 operating electric utilities. Our MidAmerican group ranked number one...

Utilities aren't exactly consumer goods. Customers don't think about buying electricity the way they agonize over which smartphone to purchase. But Buffett hasn't forgotten that customers matter, and his MidAmerican group blew away the competition. Of its customers,  95.3% were "very satisfied" with his utilities' service, while not a single respondent said he or she was "dissatisfied."

And if you think customers simply don't care, consider the fact that the worst company earned a ridiculously rotten 34.5%.

4. When our current projects are completed, MidAmerican's renewables portfolio will have cost $15 billion. We relish making such commitments as long as they promise reasonable returns. And, on that front, we put a large amount of trust in future regulation.

Renewable energy is a heated debate in the world of utilities. Production tax credits are the backbone of an energy company like NextEra Energy (NYSE:NEE), with 10,000+ MW of wind power. With $15 billion of its own invested, MidAmerican (and NV Energy) are no different.

Investing in renewables is a risk for energy companies -- wind subsidies could come to a standstill, and the sun could stop shining on solar if political support goes sour. But Buffett is at least willing to bet renewables are worth the risk -- and he's got $15 billion on the table to prove it.

5. NV Energy will not be MidAmerican's last major acquisition.

Berkshire Hathaway owns two major regulated, capital-intensive businesses: MidAmerican Energy and transport company BNSF. Investors had been holding their breath last year to see what Buffett's next brilliant move would be. And when news of NV Energy hit the racks, utilities got a fresh once-over by many analysts. With the Oracle of Omaha's hint of more to come, utilities aren't a one-off investment for this billionaire, and his next investment could be even better than his last.