Please ensure Javascript is enabled for purposes of website accessibility
Free Article Join Over 1 Million Premium Members And Get More In-Depth Stock Guidance and Research
By ICRA Online - Mar 11, 2014 at 11:00AM

Lexus changes its top management to strengthen its portfolio, but what opportunities does the premium auto segment hold for this luxury carmaker

World's largest carmaker Toyota ( TM 1.54% ) is headed for record profits in the current fiscal year that ends in March. While investors are cheering, there's no denying the fact that its profits are largely fallout from "Abenomics", or Japanese Prime Minister Shinzō Abe's monetary policies. The current Japanese government has devalued the currency significantly to increase the competitive edge of Japanese manufacturers in the global scene -- and Toyota is among the big beneficiaries.

But the currency benefit is not going to last forever, so Toyota has to figure out a means to boost its core profitability. Fortunately, Lexus, the company's luxury brand, offers a way out, and Toyota is leaving no stones unturned to overhaul the brand. Let's assess the situation.

Lexus is an important part of Toyota's strategy
Premium cars generate higher profit margins than other segments. Take the world's most profitable auto brand Porsche for example -- it accounted for 2% of Volkswagen's ( VWAGY 4.14% ) nine-month group sales, but contributed 22% of operating profits. On average, premium cars have a margin of 10%-15% compared to other segments' 6%-9%.

No wonder Toyota is motivated to completely overhaul the Lexus brand. The company's global design chief, Tokuo Fukuichi, will take over as president of the luxury brand, and will also hold a supervisory position on the board. The current president of Lexus would become the chief officer of the Lexus R&D group.

The Japanese auto major has aimed at an ambitious target of achieving 10% annual growth for the next 30 years for Lexus. This will come from both established markets like the U.S., and emerging nations including China, India, Brazil, Vietnam, and Peru.

U.S. remains red-hot
The U.S. remains a hot spot for luxury sales in the next five years according to the Departures magazine and Ledbury Research. Lexus intends to widen its U.S. portfolio with expensive and exclusive offerings.

In the recent past the brand has succumbed to the competition from BMW ( BAMXF 0.00% ) and Daimler AG's Mercedes, and Toyota admits without hesitation that regaining its position will not be an easy job. But Toyota is in no hurry to immaturely mishandle the situation just to contend with the German automakers. In the Detroit Auto Show, the U.S. chief of Lexus, Jeff Bracken, said that he expects the brand's sales to rise a modest 6% to 290,000 in 2014. 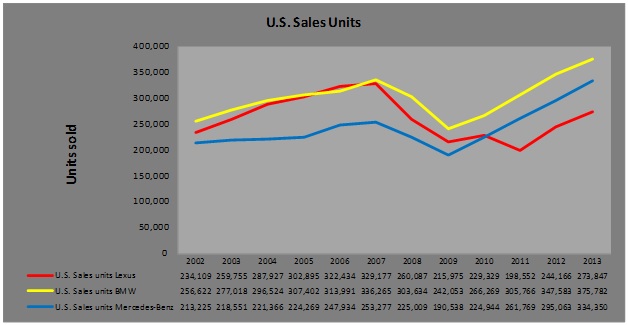 Toyota plans to be more aggressive on the styling front, and gave a glimpse of this at the January Detroit Auto Show where the carmaker showcased the all-new Lexus RC F performance coupe. It's expected to hit showrooms later in the year. The company already rolled out the new Lexus CT hybrid in January, and is currently considering whether or not to release the premium LF-NX crossover that it unveiled in the Tokyo Motor Show last November.

Recently Lexus received a valuable endorsement by topping Consumer Reports' annual car brand report cards for a second straight year, beating all other big names in road tests and reliability, including Mercedes, BMW, Honda's Acura, and Volkswagen's luxury brand, Audi. This couldn't be better timed as Toyota is making an all-out effort to reestablish its dominance. The purpose of the magazine's reports is to identify premium brands that manufacture comprehensive cars that are reliable and consistent. Lexus excelled in all the parameters and scored 79, followed by Acura with 75, and Audi with 74.

Emerging markets look promising
Luxury cars are selling at a speedy clip in emerging markets such as China, India, and the Middle East. Lexus is already popular in the Middle East, where it registered an impressive 19% growth by delivering 37,284 units last year, and is preparing for a bigger battle in China and India.

The day isn't that far when the U.S. would have to pass on the crown as the largest premium car market to the increasingly sophisticated Chinese market. As per McKinsey and the Organisation for Economic Development and Cooperation, China is the fastest-growing luxury car market, and is estimated to surpass the U.S. by 2016.

Audi currently dominates China's luxury car space and sold 1.58 million vehicles last year. In India, too, it surpassed both Mercedes and BMW by clocking 10,002 unit sales in 2013. Audi is expanding its lineup in India, and plans to roll out its A3 sedan midyear.

Managing director of Toyota India, Naomi Ishii, counts the Indian subcontinent as one of the important target markets and says that "the entry of Lexus in India is only a matter of time". The premium car segment in India expanded 15% year over year in 2013, according to the Confederation of Indian Industry and Indian researcher IMRB International, and is expected to keep growing at the same rate.

Parting word
Toyota's plan to focus on Lexus looks good. There is no doubt about Lexus' ability to reap benefits from the growing luxury demand. With solid demand in the U.S. and encouraging response from emerging nations, the brand is set to see exciting times ahead. The automaker's approach to establish the brand correctly and then the numbers will automatically follow, speaks tons about its fundamental strengths and commitment to excellence.