Pandora and Zynga are easily beating the market this year, but both have some big hurdles to overcome.

We're just a few months into 2014 and Pandora ( P ) and Zynga ( ZNGA 1.45% ) are already steadily outpacing the market. While a few months of gains isn't much to go on, let's take a look at what these companies are doing right, what advantages they may or may not have, and what hurdles they face going forward.

Pandora: Up 27% year to date
Pandora's music streaming service went public in 2011 and has made some investors very happy. The stock is up more nearly 27% this year and up more than 155% since its IPO three years ago. The company captured about 30% of music streaming listeners last month, with iHeartRadio coming in second with just 9%. 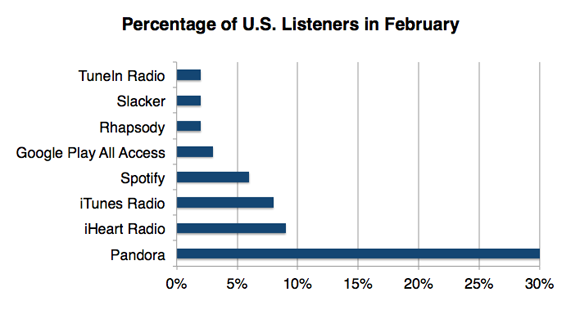 Pandora's advantage over the competition is its massive active listener base totaling about 76 million right now. Last month, those listeners streamed 1.51 billion hours. All those hours of streaming represent advertising opportunities for Pandora.

But not everything is rosy for Pandora. Though the company saw a 9% year-over-year increase in total listeners last month, it was Pandora's slowest growth to date. The company is also facing stiff competition from Apple's iTunes Radio. iTunes entered the market just six months ago and now nabbed 8% of the Internet radio listeners last month, taking the No. 3 spot behind iHeart Radio and Pandora.

If the increased competition weren't enough on its own, the company recently forecasted lower fiscal first-quarter earnings than expected, and Pandora said diluted earnings per share would be a loss of $(0.16) and ($(0.14). So while Pandora may be doing relatively well now, investors should seriously consider how iTunes Radio could hurt the company, and keep in mind that Pandora needs an increase in listeners in order to continue wooing advertisers to its service.

Zynga: Up 43% year to date
Zynga's stock has been battered and beaten back since its IPO a few years ago, but in 2014 the stock is up more than 40% and up more than 50% over the past 12 months. Zynga's in the middle of a turnaround and investors are pleased with the company's focus on mobile games, cost-cutting, and new management.

Less than a year ago, Zynga's founder Mark Pincus turned over the CEO title to Don Mattrick -- a move that signaled a new Zynga was emerging. After being one of the most dominant gaming companies on Facebook, Zynga is trying to figure out how it can sustain itself apart from the social media juggernaut. The company is releasing and creating new versions of its most famous games like FarmVille 2, Zynga Poker, and Words with Friends, but it's also purchasing other companies with in-demand games. In January, the company bought NaturalMotion, maker of Clumsy Ninja for $527 million.

But just as with Pandora, there are a few things investors should be wary of. The most disconcerting for Zynga is that the company is so reliant on creating smash-hit games or at least purchasing them from other companies. The company makes the vast majority of its revenue from just a handful of successful games and typically gets just 2%, or less, of its users to make in-game purchases. So creating massively popular hits is a must. While the stock is doing well so far this year, investors shouldn't be naive about how hard it will be to keep its blockbusters coming.

Foolish thoughts
While both Pandora's and Zynga's stocks are doing well so far this year, I can't imagine Zynga being a great long-term play for investors. The ephemerality of mobile games and the necessity for creating continual huge hits make the company seem fragile. Even if Zynga has another few hits up its sleeve, it doesn't have much of an advantage over the competition and it's too easy for users to move on to another company's game.

As for Pandora, the company definitely has an advantage over the competition with its sizable number of active users. Even with increased competition from iTunes Radio, Pandora has already etched out a solid place in the music streaming space that'll be hard for the competition to overcome. Apple is notorious for taking over new markets, but Pandora should be able to old its own against the iMaker, at least for now.