Forget over-the-top reality TV shows and hitting up Vimeo for cool time-lapse videos. If you want to see a true extreme makeover, take a look at the difference between Ford's (NYSE:F) balance sheet at the end of 2008, versus the just-ended fiscal 2013 year.

Shortly after coming on board as CEO in 2006, Alan Mulally launched the "One Ford" plan, a clearly stated, four-point corporate strategy. One of the goals of this still-current plan is for Ford to "Finance our plan and improve our balance sheet." This commitment is fascinating, as so few corporations seem to reference their balance sheets when discussing business strategy. At the time the plan was launched, Ford truly needed to face its overextended debt load and lack of resources on hand to finance sustainable growth.

Let's review the areas of notable change in Ford's resources between 2008 and the present. Unless otherwise stated, we'll focus primarily on Ford's automotive balance sheet -- the portion of the balance sheet that does not include Ford's financial services arm.

Attacking large liabilities and long-term debt
In 2007, Ford began an arduous process to reduce both its mammoth retirement liabilities and its long-term debt. It established and funded a Voluntary Employee Beneficiary Association (VEBA), the result of negotiations with its workforce, which transferred some retirement liabilities off Ford's books. Ford also issued billions of dollars of common stock between 2008 and 2013 to convert and restructure its long-term debt load. The company has also used operating cash flow to pay down debt and reduce the associated interest expense. The following table shows the difference in six years between these liability categories:

There's nothing wrong with keeping cash in the bank
What's Ford done with the profits it's generated since 2008? At least $9.4 billion of those profits have appeared on the automotive balance sheet as a combination of cash and marketable securities. The company now keeps just under $5.0 billion in cash on hand, with another $20.1 billion invested in marketable securities. This is a 60% increase in cash and securities from the $15.7 billion totals the company presented on its books at the end of 2008. Building up healthy cash balances again will serve Ford handsomely, as it gives the company more flexibility to pursue small acquisitions, as well as invest in product innovation. 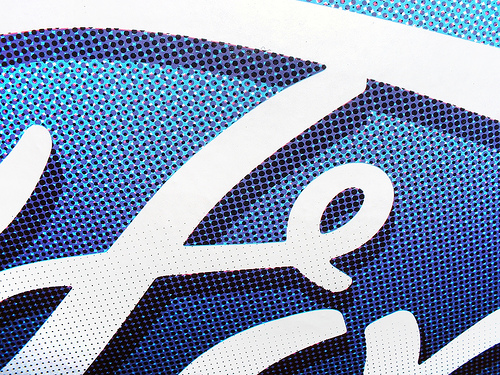 Detail of Ford logo courtesy Dominic Alves under Creative Commons License. The Ford logo was famously collateralized under the company's huge borrowings in the mid-2000s, and was finally released from collateral liens in 2012.

Optimizing Inventory
Ford's inventory line item is one of the places where the company's progress really gets illuminated. Inventory at 12/31/2013 was recorded at $7.7 billion, nearly $1 billion less than the amount of automotive inventory shown at 12/31/2008. Sales climbed during the period, and Ford's automotive revenue is now about $10 billion more than 2008 levels (at $139.3 billion for the year just ended), so you would expect higher inventory on the balance sheet with increased revenue, correct?

The easy answer is yes, but by tying production as closely as possible to actual demand, a savvy manufacturer can avoid tying up excessive amounts of resources in raw materials and finished goods. Ford has made a practice of building to demand levels rather than churning out finished vehicles to place ad hoc with dealers. Thus, the company is turning its annual inventory about 15% faster than in 2008, and it's also managing the inputs of production more efficiently. While Ford is on track to reduce its global vehicle platforms from 15 to nine by 2016, the company actually produced 85% of global vehicle volume on just nine core platforms last year, so for all practical purposes, the automaker is already at its platform goal.

If there's one place to be skeptical of Ford's balance sheet, which is related to inventory, it's Ford's automotive payables, which were 1.7 times inventory in 2008, but have expanded to 2.3 times inventory at the end of 2013. The rise in payables is partially explained by the fact that Ford's trade payables tend to balloon at year-end, during December plant shutdowns, when production halts, but supplier costs continue to accrue. But higher average AP balances indicate some lengthening of days payable outstanding. This is a recent practice common among Fortune 500 companies: By shifting supplier payments back by even a few days, companies can marginally improve cash flow.

Deferred tax assets are a finance team's best friend
In certain situations, utter failure can result in balance sheet strength. This occurs when a company with steep losses carries forward net operating losses and tax credits, as Ford has done from its years in the red in the early and mid 2000s. As a result, Ford now has a net tax-deferred asset of $12.7 billion on its consolidated balance sheet. Out of this number, $8.0 billion derives from tax losses and credits that the company will be able to utilize against taxable income in the coming years. While Ford will still record income tax expense on its books, the actual cash paid to Uncle Sam for taxes should be quite low for at least the next couple of years, if not further, depending on Ford's profitability.

Shareholder equity is a great way to keep score on a balance sheet's progress
Ultimately, how do you measure if a company is managing its balance sheet well? If the company is profitable, over time, you will see a clear correlation between increased assets and a reduction of liabilities on the other side of the ledger. After all, the basic equation that governs the balance sheet is not any different from when you or I present a personal financial statement to a bank, to get a car loan or mortgage. Simply expressed,

A well-run company that generates profit will place a priority on converting those profits to cash. With cash, it will reduce non-productive liabilities, increase capital investment, and invest a prudent amount of  the remainder wisely in marketable securities. At the end of each year, the balance sheet position of any company is a snapshot of that organization's fiscal health, and a healthier complexion should be reflected in the Shareholder's Equity account.

In 2008, Ford's total (consolidated) Shareholder's Equity was plunged so deeply underwater that financial analysts had to don diving gear just to find it, at negative $14.5 billion. Six short years later, equity is a positive $26.4 billion. Factor out $10.5 billion of common stock issued for debt conversions and restructuring, and you'll still find a $30.4 billion positive swing. That's an extreme makeover that veteran shareholders can surely appreciate.