Please ensure Javascript is enabled for purposes of website accessibility
Free Article Join Over 1 Million Premium Members And Get More In-Depth Stock Guidance and Research
By Justin Loiseau - Mar 15, 2014 at 11:04AM

My Intuit Inc., Apple Inc., and Orange investments are paying for one Fool to file his taxes. Here's how.

While my current location in Uganda makes it impossible for me to support my Tesla Motors investment with a new Model S, the value add for these three other stocks is shining brighter than ever in this emerging market. With shares up for Intuit, Apple, and Orange over the past year, here's how these investments are paying for my product use. 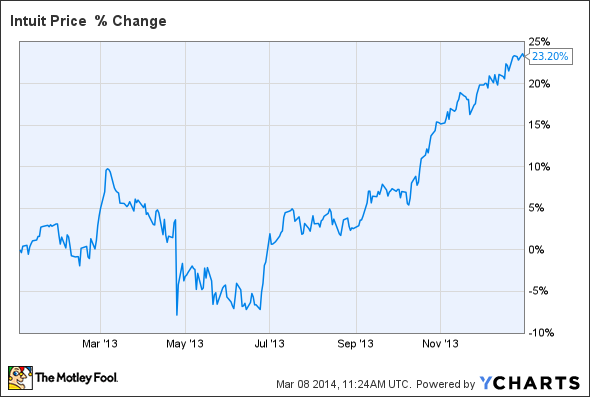 Taxes are tough. As a young whippersnapper who thrives on efficiency, I don't want to bother with the burden of filing taxes. The first time I paid taxes, I used Intuit's TurboTax -- and I bet I'll be using TurboTax until the day I die.

From just 9.7 million users in 2002 to 16.8 million in 2007 to 26.2 million last year, Intuit is growing its customer base -- fast. And while the company sold three times the number of hard copies as web copies in 2002, that ratio has reversed, hinting at the growing number of online users.

In Uganda, I downloaded my electronic copy of TurboTax Home & Business from Amazon.com ( AMZN -1.81% ) (which I also own shares of) for $71.99. With Intuit up 23% for 2013, my TurboTax investment goes well beyond my TurboTax purchase price. 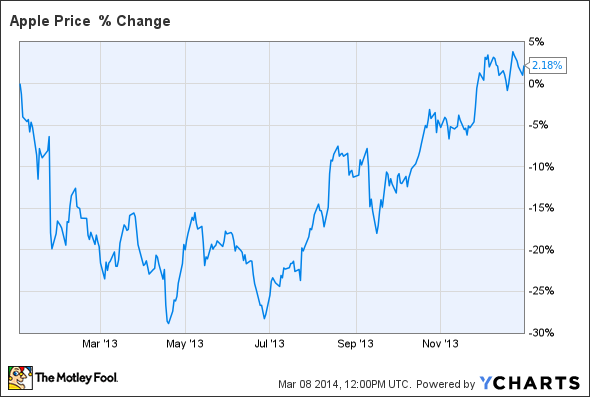 Until a few months ago, I stuck by my "dumb phone." But when I broke down and bought my first smartphone, I went whole hog with Apple's iPhone 5s. In Uganda, where Wi-Fi networks (and electricity in general) are sometimes nearly impossible to come by, an Internet-equipped smartphone has helped me immensely.

Although Apple's closest retail store to Kampala, Uganda, is 3,458 miles away in Marbella, Spain, mobile phones and increasingly accessible Internet are improving efficiency and information access across Uganda.

Apple's 2.2% stock price increase in 2013 is lackluster at best, but my long-term position in this company has more than paid for my iPhone. Despite its $473 billion market cap, Apple has experienced significant share volatility. Its current 52-week range reaches as low as $385 and as high as $575 -- but for me, I'm in for the long run. 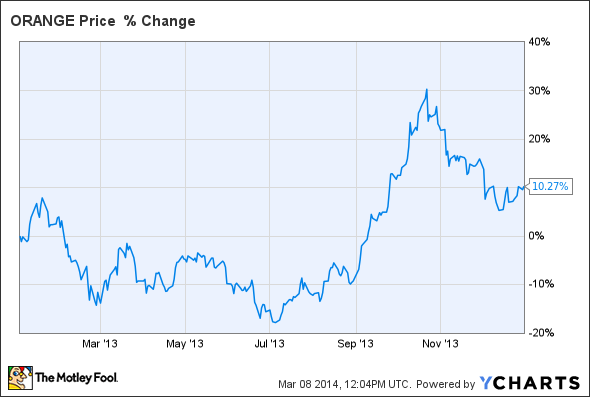 For 100,000 Ugandan shillings (US $40) per month, Orange provides me with all the Internet I need. While Orange rakes in almost 50% of its revenue from France, it's this company's overarching presence in emerging markets that keep this company part of my personal portfolio.

Its 10.3% stock gain in 2013 is more than enough to pay for my Internet usage, and its 6% dividend yield keeps funds coming in. I originally purchased shares when French fears dipped stock prices into the dumps, and I'll hold on to Orange as I see how its fares internationally.

Orange operates in 160 countries and boasts a whopping 231 million customers worldwide. While only 15 million of those are broadband Internet customers, the company could see major growth. As Orange's European market contracted 1.2% in 2013, its Asia-Pacific market increased 4.2%, Latin America grew 5.1%, and the Middle East and African markets both expanded 8.5%.

In Uganda, Orange won the "Best Network Improvement" award at the 2012 AfricaCom Awards, chalking up points for its extended 3G coverage in rural areas via satellite dishes. For me, that means I can work on my taxes at the bank -- of the Nile River.

Going for growth
While shares of Intuit, Apple, and Orange were all up in 2013, all failed to live up to the S&P 500's ( ^GSPC -1.18% ) 26.4% returns. But I'm looking beyond one year, and my investment theses for these three companies has me convinced that, in the long run, they'll pull profits and beat the market. Their products provide me with what I need today, and I expect their shares to keep pushing higher in the years to come.