Investors love stocks that consistently beat the Street without getting ahead of their fundamentals and risking a meltdown. The best stocks offer sustainable market-beating gains, with robust and improving financial metrics that support strong price growth. Does SodaStream International Ltd. (NASDAQ:SODA) fit the bill? Let's look at what its recent results tell us about its potential for future gains.

What we're looking for
The graphs you're about to see tell SodaStream's story, and we'll be grading the quality of that story in several ways:

What the numbers tell you
Now, let's look at SodaStream's key statistics: 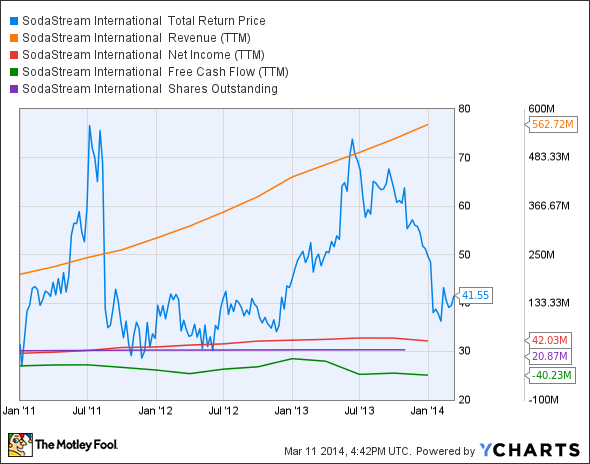 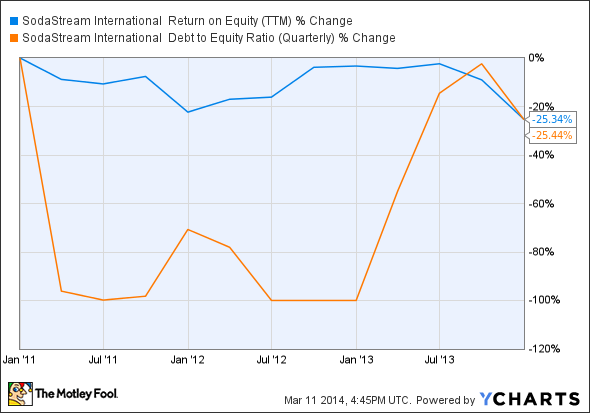 How we got here and where we're going
SodaStream puts together a strong performance by racking up five out of seven possible passing grades. Over the past three years, the company's revenue and profit margin have both risen impressively on the back of high demand for the company's niche prodcts, but SodaStream's free cash flow has diverged markedly from these metrics, costing it a failing grade on this test and posing a worrying issue for investors who have long sought positive momentum on this front. Let's dig a little deeper to find out what SodaStream is currently doing to fix this one fundamental weakness

SodaStream's fourth-quarter earnings recently came through with mixed results -- revenue rose by an impressive 26% year-over-year thanks to double-digit growth in CO2 canister and flavor pack sales, but earnings per share took a dive as the company found it difficult to keep production costs under control. Fool analyst Blake Bos notes that the company decided to reconfigure 600,000 SodaStream machines for redeployment from the U.S. to other markets, which spiked expenses during the quarter. Moreover, SodaStream's exploration of other growth avenues, such as television's Home Shopping Network, wound up putting downward pricing pressure on its products as multiple outlets competed for the same consumer dollars.

According to SodaStream, the worldwide carbonated-beverage industry is estimated to be worth about $260 billion. At annual sales of just $563 million, SodaStream would appear to have a monstrous opportunity for growth in the foreseeable future. The company recently entered into a strategic agreement with Sunny Delight to produce SunnyD branded syrups for SodaStream's systems, and SodaStream also signed a deal with cocktail and drink-mix purveyor Skinnygirl -- part of the Beam stable of brands -- to develop a new range of flavors for women. Both of these new lines are slated to launch during the second half of 2014, and should expand the company's mind share beyond its current soda focus. The company also introduced single serve SodaStream Caps to flavor up carbonated beverages, which have gained solid traction thanks to a controversial Scarlett Johansson ad (more on that in a moment).

However, Coca-Cola's (NYSE:KO) recent 10-year contract with Green Mountain Coffee Roasters (NASDAQ:GMCR.DL) to produce Coke's products in the upcoming Keurig Cold machine, which will be available this fall, was a major blow to SodaStream investors that is likely to hang over the company for some time. While SodaStream CEO Daniel Birnbaum said that "everyone has a right to make a mistake" in regards to the Coke-Green Mountain partnership, this clearly represents a threat to SodaStream's heretofore-unchallenged dominance of a very small slice of the carbonated-beverage market.

SodaStream had hoped to capitalize on a banned Super Bowl ad titled "Sorry, Coke and Pepsi" featuring Scarlett Johansson, and the ad has been popular, with more than 13 million views on the company's official "uncensored" YouTube version to date. However, all publicity may not be good publicity, and much of the press regarding this popular ad has focused on Johansson's association with an Israeli company accused of exploiting Palestinian workers at its West Bank plant. The one-two punch of these events could do more to dent SodaStream's growth than anything else it has faced to date.

Fool contributor Ted Cooper points out that speculation is swirling over a potential acquisition by soda giant PepsiCo (NASDAQ:PEP), which would here be an attempt to follow rival Coca-Cola into the home-carbonated beverage market. With shares currently trading at a reasonable 17 times forward earnings, SodaStream might offer substantial upside potential -- if the company can overcome these new challenges, and its margin issues, to gain market penetration in the massive carbonated-beverage industry.

Putting the pieces together
Today, SodaStream many some of the qualities that make up a great stock, but no stock is truly perfect. Digging deeper can help you uncover the answers you need to make a great buy -- or to stay away from a stock that's going nowhere.