Coffee prices hit a two-year high this week as Brazil's worst drought in 80 years continues to cut production predictions. With the next cup of Joe in flux, is it time to switch to tea?

Brazil is big
When it comes to coffee production, Brazil is the Venti of all Ventis (that's "extra large" for you non-Starbucks Corporation (NASDAQ:SBUX) addicts). In 2012 (most recent data), the South American country produced a whopping 3,037,534 tonnes of beans – more than double Vietnam, its closest competitor.

In fact, Brazil has been the biggest coffee producer for 50 of the 51 years data have collected by the Food and Agriculture Organization. 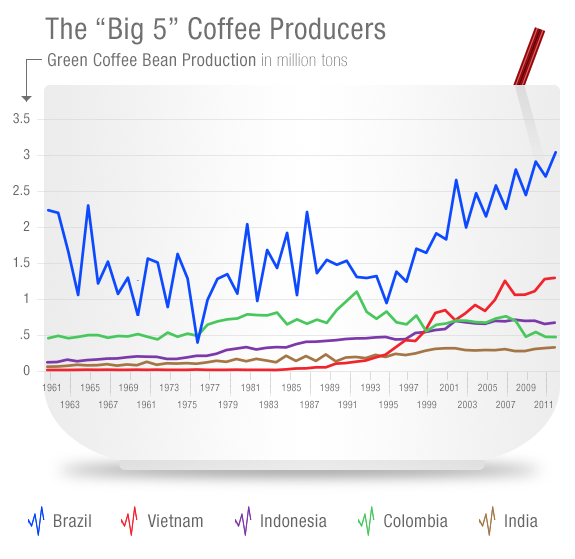 Since green coffee beans lose about 20% of their weight when roasted, and a single cup of coffee uses about 10 grams of beans, a back-of-the-envelope calculation shows that Brazil was the birthplace of 243 billion cups of coffee in 2012.

Cut crops and increased costs
But bigger isn't always better. The coffee-producing capital of the world experienced its second-driest January in 80 years, and farmers are worried that yields are going to take a tumble.

Arabica coffee futures rose to a two-year high to $2.08 per pound this Tuesday, as analysts took a second look at estimates. Brazil is the top producer of Arabica, and bean costs have soared around 85% so far this year amid fears of a trimmed 2014-2015 crop, with ripple effects extending through 2016.

Not only do droughts directly affect coffee yields, but they can also skyrocket electricity costs. Brazil depends on hydropower for 80% of all its generation, and low reservoir levels means less power pumping from hydroelectric dams.

In 1994, "soaring coffee prices" pushed the coffeemaker to increase its own prices for the first time in three years. In 1997, Starbucks Corporation increased prices again by around 5 cents as commodity prices hit a 20-year high. And in 2011, the company shot prices up 15 cents in certain regions to offset soaring coffee costs.

Last year, however, Starbucks Corporation got a break. In an October email correspondence with the International Business Times, Starbucks Corporation expected to save around $100 million from cheaper coffee. And in its latest earnings report, Starbucks Corporation CFO Troy Alstead confirmed that lower commodity costs added 0.5% to the coffee company's full-year earnings. Brazil's record 2012 crop undoubtedly helped slow any worries of a supply squeeze. That kept coffee price increases to just 1% across U.S. stores.

But if past years are any evidence, the price plateau is over. Starbucks Corporation is most likely gearing up for another menu modification, and you should be prepared to pay significantly more for your venti mocha frappuchino in the near future.