High-end smartphones may be more popular in China than you thought.

According to Umeng, 27% of smartphones used in China cost more than $500, and 80% of those high-end phones are made by one company: Apple (NASDAQ:AAPL).

Contrary to popular belief, Apple is not getting its lunch eaten by Samsung (NASDAQOTH: SSNLF) in China. Moreover, its new agreement with China Mobile (NYSE:CHL) went into effect Jan. 17, which means Apple stands to gain even further ground in China. 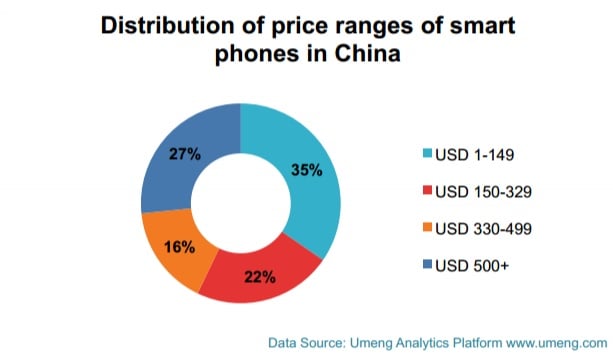 More than one-third of smartphones sold in China fall into the "smartphones that function as feature phones" category, with 35% of phones sold for less than $150. Apple is more interested in transitioning these customers into real smartphone purchasers than catering to the low-end market.

Comparatively, Apple accounts for 41.6% of the U.S. market as of January. The U.S. smartphone market is largely composed of devices priced above $150, with the average smartphone selling for about $500. So, Apple isn't far off in China.

Better than Samsung
Here's the real interesting thing. Despite Samsung's efforts to control market share by flooding the market with smartphones at every price range, it hasn't succeeded. 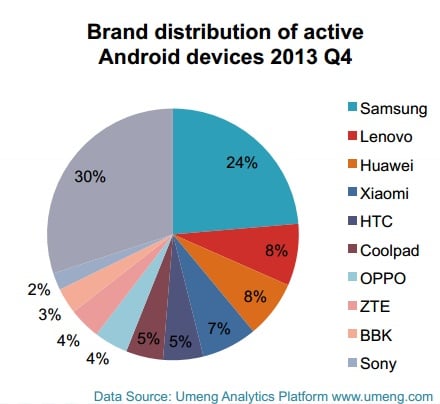 Meanwhile, of the other 78.4% of smartphones that make up the Android camp, Samsung only took 24%. Counting non-Android phones, Samsung's 24% of the Android share represents only 18.8% of the total smartphone market. Indeed, the market is much more fragmented in China than it is in the U.S.

Perhaps Apple's success stems from its ability to differentiate itself from the Android camp in China. Samsung has tried to separate its products from the pact by implementing different user interfaces. In 2014, the company may introduce its first phone that runs on Tizen OS, an Android alternative the company is heading up with Intel.

Analyst estimates for the number of iPhones sold through China Mobile in 2014 range from 12 million to 39 million. In January, the effect of the iPhone debut was clear. China Mobile added 14.2 million new 3G subscribers, which is 7.4% growth from December. That number represents the fastest month-to-month growth in 3G subscribers since last August and the biggest absolute 3G subscriber increase ever.

Not only will adding China Mobile as an official carrier help boost sales of the iPhone in China, it should also help quell the number of jailbroken iPhones. When a user jailbreaks his iPhone, he can use his phone with any carrier and bypass the Apple App Store. 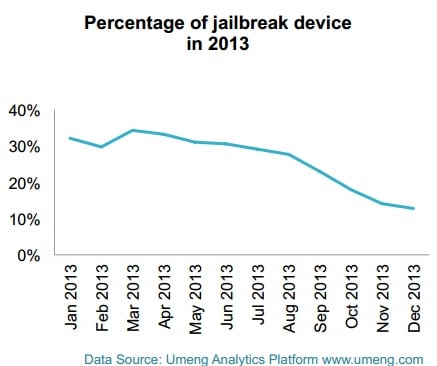 The number of jailbroken iPhones has declined significantly over the last year, from 30% in January to 13% in December. Security risks are much higher on jailbroken phones. The introduction of the iPhone on China mobile will ensure that number continues to decline. As a result, Apple's iTunes revenue will see the benefit.

Making the best
Tim Cook has iterated several times that Apple doesn't care about market share, it cares about making the best products. Eventually the market will catch up. If you look at China, the largest smartphone market in the world, Apple's philosophy is starting to pay off. It's better than Samsung, and the second most popular phone maker in the country by active users. The deal with China mobile, along with the expanding economy, will fuel Apple's sales going forward.

People in China want the iPhone, it's just a matter of affording it.

Editor's Note: A previous version of this article misstated Sony's share of the Android market in China. It has since been corrected.