Back in November the Nasdaq Composite Index (NASDAQINDEX:^IXIC) closed above 4,000 for the first time since the dot-com bubble burst. It was perceived as a monumental achievement for the market, but also brought back some bad memories. The Nasdaq hadn't been that high since the tech bubble of 2000, and some investors have been wondering if the next one's right around the corner.

This month marks the 14-year anniversary of the tech stock crash, and so the reflection continues. There are obviously two sides to this debate, and whether you think it's a bad time or the right time to invest, there are some good reasons as to why people are talking about the possibility of tech bubble. 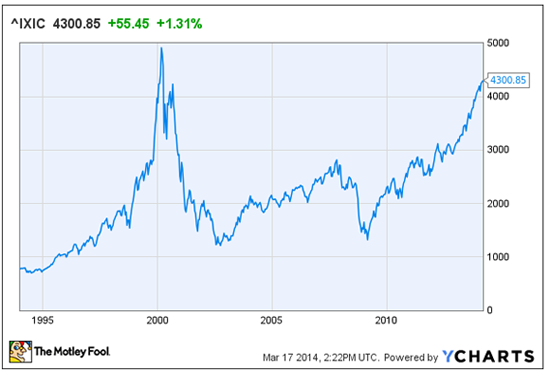 The Nasdaq Composite Index is climbing higher, and faster.

Valuations getting higher and higher
A few months ago a New York Times article provided data from a Bloomberg Global poll showing that analysts and traders think there's tech bubble forming. The poll showed that of the respondents, 82% of them said Internet and social media stocks are already at unattainable levels, or at least very close. Nearly half of the respondents said those stocks are already in a bubble and one third said they're on the edge of one.

The article mentioned several tech stocks getting multibillion dollar valuations without a dime of revenue. Snapchat received offers from Google and Facebook (NASDAQ:FB), and very publicly turned down $3 billion from the social-media juggernaut. Another is the IPO-hopeful, Pinterest. Again, no revenue, but it's valued around $3.8 billion right now. Dropbox, yet another IPO prospect, just closed a $250 million series of funding, with a valuation of $10 billion.

The Wall Street Journal reported that Dropbox's valuation has more than doubled since 2011, when is was estimated to be worth just $4 billion. WSJ said the company had $116 million in sales in 2012 and expected $200 million in 2013. With those estimated sales, it would put Dropbox's worth at 50 times its current sales.

These high valuations lead to expensive tech mergers and acquisitions. For example, this month Facebook bought WhatsApp for $19 billion, which could end up being a smart purchase for the social media company, but the price is still hard to swallow considering WhatsApp currently brings in about $20 million in revenue.

One important point bubble doubters will raise is that many of today's tech companies have viable business models, where ones in the dot-com era didn't. Before the 2000 bubble burst, company's seemed to gobble up venture capital money by simply pitching good (or not so good) ideas, without marking out the long-term goals or how exactly they'd make money.

Alibaba is a good example of tech company with viable business model, with real revenue, but has received extremely high valuations by investment banks -- as much as $200 billion. Alibaba is planning a US IPO and Bloomberg recently reported that the company may sell a 12% stake of itself, which would be equal to more than $18 billion based on an average investment bank valuation of $153 billion. If Alibaba raised that much it would surpass Facebook's $16 billion in 2012 and take the second-biggest US IPO spot away from General Motors.

Is the frenzy growing?
Even if today's tech companies have more stable business models than before, it doesn't mean that investors aren't getting too caught up in growth prospects.

The chart below shows the Nasdaq Internet Index, a collection of about 80 of the largest and most liquid Internet-related stocks on the Nasdaq, NYSE and NYSE Amex. Take a look at the Index's return compared to the S&P 500 since 2010. 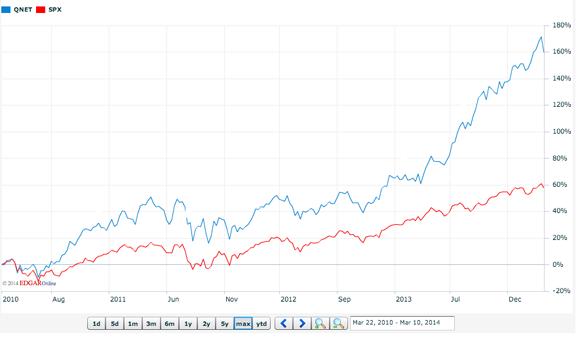 Some investors will obviously see this is a good thing, and of course big gains are what we're all looking for in the market. But it can be problematic if this large uptick is the result of investors getting too excited about Internet companies, without correctly valuing them.

But it's not just the Internet index that's growing. Some economic experts are increasing their skepticism as well. Robert Shiller, who won last year's Nobel Prize for economics, told Reuters recently that he thinks the US financial and technology sectors are overvalued. He may know a thing or two about it, considering he and his colleagues won the prize "for their empirical analysis of asset prices."

Foolish final thoughts
Obviously, bubbles are notoriously hard to predict. If they weren't, we'd all invest in high-flying tech stocks and exit before they collapsed. But that's not the Foolish approach and it's nearly impossible to do anyway. While there are good points both for and against a current tech bubble, I can't help but think we're at least partially in one right now.

There are of course tech stocks that are experiencing legitimate growth. There are also newcomers that aren't earning anything right now, but still have solid business models. But it's not hard to see that more than a handful of tech companies over the past couple years are sporting multi-billion dollar valuations, with little more than a large user base. If you add those companies to the other data of the Nasdaq Internet Index skyrocketing, analysts and traders admitting growth that outpaces values, and economic experts raising concerns over the tech industry, a tech bubble looks very likely.

The severity of a bubble burst depends on how big it's allowed to balloon. I can't imagine our current situation being as bad as it was in 2000, but then again the outcome lies entirely in the hands of investors.