The health care sector has had a rare downturn over the last 30 days, and some are starting to wonder if this is the start of a sector wide correction. The iShares Biotechnology Index has fallen 2.46% in the last month of trading, and biotech stalwarts Celgene (NASDAQ:CELG) and Gilead Sciences (NASDAQ:GILD) are both down over 8%. What's most surprising is that Celgene and Gilead are expected to have strong years in terms of earnings and the development of their respective clinical pipelines.

Gilead, for example, is projected to increase earnings somewhere in the neighborhood of 80% to 100% due to the launch of Sovaldi. Yet, the chart below pretty much says it all. 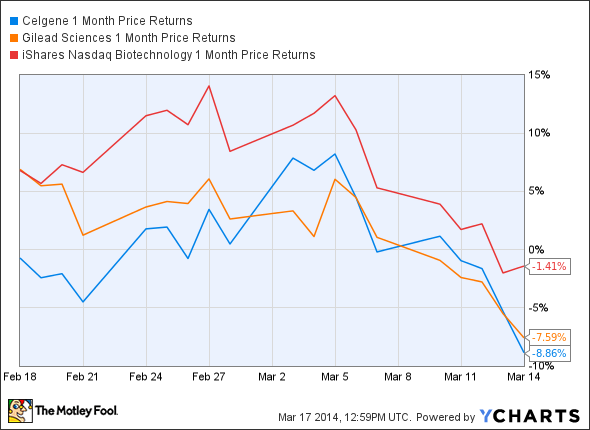 Before you panic, I think there are several reasons to remain optimistic about the sector's long-term outlook.

A deeper look shows most biotechs are still performing well
If we break the sector down by market cap, some interesting trends pop out. Among large cap pharmas, 69% have bucked the recent downtrend. Mid-caps haven't performed as well, but 54% of these companies marched northwards in the past 30 days. I'd also like to point out that speculative small-cap biotechs are performing well, with 65% of this group moving higher.

That's notable because smaller companies lacking stable revenues tend to be among the first to go sour in a sectorwide correction. Put simply, investors tend to flee for safer assets in turbulent times. Overall, we aren't seeing much evidence of a trend that should cause mass panic.

By contrast, this breakdown makes me believe this is more of a temporary pullback that is getting a lot of media attention because of the names involved. Indeed, Celgene and Gilead are often made out to be the proverbial "canary in a coal mine" among health care stocks. Nonetheless, I hoped this breakdown has impressed upon you that they are in the minority in terms of monthly performance.

So, why are Celgene and Gilead leading the pack lower?
To be honest, I don't have a good answer. Over the last few sessions, there has certainly been a fair amount of speculation revolving around bubble theories, patent issues, regulatory risks, and large insider sales. And while these issues might play a role, I don't think any one of these factors is playing a large role.

The patent suit between Gilead and Idenix Pharmaceuticals (NASDAQ: IDIX), for example, shouldn't bother Gilead anytime soon, if ever. Patent suits, after all, take years to wrap up. Moreover, this ongoing litigation between Idenix and Gilead isn't a new issue, so it's hard to see why it would cause Gilead shares to drop like they have.

The regulatory issues facing Celgene's Revlimid in the U.K. are nearly immaterial to the company's overall business. Even if Revlimid is rejected for certain indications in the U.K., the future revenue lost pales in comparison to the market cap that got chopped off last Friday. In sum, I understand why bubble theories are gaining in popularity for these two stocks, especially given that material events can't shed much light on the recent weakness. Yet, a breakdown of the sector by market cap would seem to dispel the bubble hypothesis.

Earnings will be telling
After ruling out events on the ground and bubble theories, my best guess is that the anemic 2014 guidance provided by both Celgene and Gilead earlier this year is the culprit. If you recall, Gilead's management refused to speculate about Solvadi sales in 2014, telling investors that it was still in the "early days."

Celgene's management followed suit, causing shares to struggle immediately after releasing fourth quarter earnings and 2014 guidance last January. Looking back, my Fool colleague Leo Sun appears to be spot on after suggesting that Celgene shares could move lower in the wake of its conservative 2014 guidance.

Wrapping up, I think investors in these two key biotechs need to pay close attention to first quarter earnings, and the market's subsequent reaction. Most people are expecting Gilead, at least, to crush earnings estimates given the sky high prescriptions of Sovaldi. If the stock falters in the wake of good news, then it might be time to revisit this bubble meme. Until then, I think it's best to reserve judgment, especially since the recent weakness has been confined to relatively few, albeit top, biotechs.