christian sgrignoli
(christian010)
Author Bio
Christian Sgrignoli is the President of CT Financial LLC. The firm was created in 2012 as a consulting business via state legislative enactments. It currently operates as an investment management and research company.

Staples ability to maintain free cash flow is vital to continue it's dividend and share buyback program. The most common way to calculate free cash flow is subtracting capital expenditures from operating cash flow. Staples operating cash flow, which is generated by selling it's products, has experienced a downtrend recently with $1.5 billion, $1.2 billion, and $1.1 billion in 2011, 2012, and 2013 respectively. 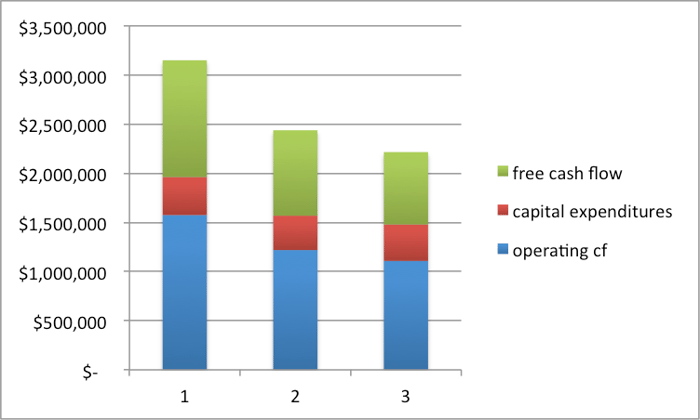 Staples free cash flow of $1.2 billion, $870 million, and $737 million in the past three fiscal years highlights that if the trend continues, it may need to slowdown its dividend and/or share buyback program. Last year's dividends of $312 million and share buyback of $259 million add up to $571 million. Unless Staples increases it's free cash flow, it may feel pressure to slow it's shareholder-friendly programs.

Two common ratios used to test liquidity are the current and quick ratio. Unlike the current ratio, the quick ratio does not include inventory, which is valuable in the case Staples does not sell its inventory fast enough.

Staples current and quick ratio is 1.56 and .75 respectively. Staples top competitor, Office Depot (NYSE : ODP) has a current and quick ratio of 1.5 and 1.05. Office Depot paid out $63 million in dividends in 2013, an increase from 2012 when it did not pay any dividends. Office Depot's bought back $404 million in stock in 2013. While Office Depot may fair better in it's quick ratio, it may also slow down dividends and/or share buybacks as it had a negative operating cash flow of $107 million in 2013. Liquidity is important for Foolish investor's because if it drops too low, then the company may need to divert it's free cash flow away from dividends and share buybacks to other needs like paying it's creditors.

For foolish investors that rely on Staples dividend, the decrease in cash relative to its liabilities may be cause for concern. Dividends have been $312 million ($0.48 per share), $294 million ($0.44 per share), and $278 million ($0.40 per share) for the prior three fiscal years respectively. On March 4, 2014, the Board approved the payment of a cash dividend of $0.12 per share to be paid on April 17, 2014. The next quarterly statement will likely show if Staples will be able to increase or even maintain the current dividend yield.

If cash dividends are not touched, then the company may need to pull back on its "Repurchase plan," which has the capacity to buyback up to $1.5 billion of stock. The program has no expiration date and may be suspended or discontinued at any time. Thus far, Staples has bought back a total of $937 million to repurchase 68.1 million shares. As of February 1, 2014, the remaining repurchase balance was $562.5 million.