Now that we know the texture of the movie, it’s time to reflect on the various ways Disney could profit from "Star Wars Episode VII."

Star Wars: Episode VII will be set 30 years after Star Wars Episode VI: Return of the Jedi and star not only a "trio of young leads" but also "some very familiar faces," Disney said in an announcement. That's great news not only for fans but also for Walt Disney (DIS 1.46%) investors.

Most signs already point to a minimum of $1 billion in box office grosses following the movie's Dec. 18, 2015 opening. Now, with a mixture of new and old -- in the hands of J.J. Abrams, an experienced genre director -- there's reason to be even more hopeful.

A quick theory on what might be, borrowing from another sci-fi legend
Consider the recent Star Trek movies, both of which Abrams directed. His choice of a young cast in familiar roles, with plenty of callbacks to not only the movies but also the original TV series, played well with audiences.

According to Rotten Tomatoes, 91% of viewers liked 2009's Star Trek while 90% liked last year's follow-up, Star Trek Into Darkness. The films combined for more than $853 million in worldwide grosses while generating renewed interest in the series. Actor Leonard Nimoy also appeared in both films, reprising his role as Spock.

For Star Wars: Episode VII, I suspect Abrams and others have been wooing Mark Hamill, Harrison Ford, and Carrie Fisher for cameos in the series -- the "very familiar faces" most fans are no doubt hoping to see. I think having them would help the movie draw well, kicking off the new series in fine fashion.

And yet, whether they appear or not, there are at least three ways the new film should affect Disney's business beyond the box office:

1. A template for thrilling new rides.
Can you name the number of theme park rides attached to the Star Wars brand? There aren't as many as you might think. Two, in fact: "Star Tours" and "Star Tours: The Adventure Continues." Disney hosts these rides at a handful of its parks -- notably, Disneyland in California, Disney Hollywood Studios, and Tokyo Disneyland.

Unacceptable, right? Of course it is, especially when you consider that Comcast (CMCSA 0.77%) is committing $500 million annually to grow its theme parks business, including a huge expansion near Disney's Florida theme park operations. Adding new rides based on characters and experiences reflected in Star Wars: Episode VII could help Disney World and the House of Mouse's other parks stand out in a feverish market.

I'm old enough to have seen A New Hope, The Empire Strikes Back, and Return of the Jedi during their first run in theaters. And like so many others, I had a huge collection of Kenner action figures to help reenact my favorite adventures. Today, Hasbro (HAS -0.50%) owns the license for making themed toys.

We'll see a whole new collection developed for Star Wars: Episode VII. How much does Disney stand to gain as a result? A revised contract signed last summer guarantees at least $225 million in payments related to merchandise tied to new Star Wars films, with $75 million already paid. A related provision also guaranteed $80 million for merchandise related to the release of new Marvel films.

When it comes to Star Wars toys, Hasbro has taken over where Kenner left off. Sources: Mania.com, Hasbro.

Recently, Disney brought the Star Wars: The Clone Wars animated series to Netflix (NFLX -0.84%) along with a 13-episode exclusive sixth and final season titled "The Lost Missions." A follow-up, Star Wars Rebels, is due on Disney XD this fall.

What makes these series special is that they take characters fans know and love from the movies and transport them into different but related stories, which, in turn, introduces us to new characters. These sorts of tie-ins allow fans to get their fix even when there isn't a new live action film to turn to. 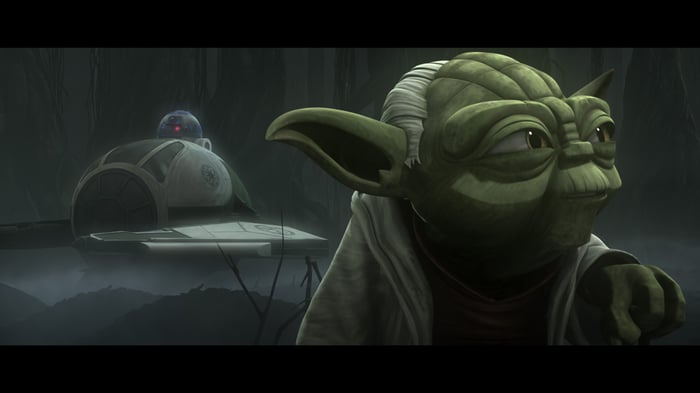 Yoda gets his due and more in "The Lost Missions" of Star Wars: The Clone Wars. Source: Starwarsblog.com.

Tim Beyers is a member of the Motley Fool Rule Breakers stock-picking team and the Motley Fool Supernova Odyssey I mission. He owned shares of Netflix and Walt Disney at the time of publication. Check out Tim's web home and portfolio holdings or connect with him on Google+, Tumblr, or Twitter, where he goes by @milehighfool. You can also get his insights delivered directly to your RSS reader.