Harley-Davidson (NYSE:HOG) recently unveiled two new motorcycles, the Low Rider and SuperLow 1200T, completing the company's largest new model release in its 110-year history. With Project RUSHMORE and Street models also being released in the past six months, Harley has continued to crank out new products to keep the pressure on competitors like Polaris (NYSE:PII) and Honda (NYSE:HMC).

Get low
The new Low Rider is a redone version of the classic 1977 bike and will pair upgraded performance with an old-school look. It comes with style elements of the original that include split five-spoke aluminum wheels, wrinkle black trim, and a polished headlamp visor. New performance features include a Twin Cam 103 engine, a two-into-one exhaust pipe, and dual-front disc brakes among others. The Low Rider also comes with accessories that can be customized to the rider's preference.

The SuperLow 1200T is a touring motorcycle that has a nimble chassis that weighs 118 pounds less than the company's lightest Big Twin touring motorcycle. The bike comes with touring features like Michelin Scorcher 11T touring tires, detachable saddlebags, a 1200cc Evolution V-Twin engine, and a new seat designed that provides comfort for long rides.

COO Matt Levatich said, "[The motorcycles] all are the result of being customer led and delivering riders the technical prowess and rebellious spirit that they want infused in each and every new Harley."

R&D is key
These new motorcycles are results of Harley's research and development expense that grew from $137.3 million in 2012 to $152.2 million in 2013. An increasing R&D expense shows that the company is investing in its future and is a good sign for long-term investors.

The company's R&D strategy is to develop new, relevant products that can be marketed to a diverse group of consumers. The company stated, "The key objectives of the strategy include implementing a new product development methodology and organization structure that support greater innovation, flexibility, capacity and focus on consumer insights."

This strategy plays perfectly into Harley's goal to grow sales in the U.S. to outreach customers at a faster rate than its core customers. Outreach customers include young adults, women, African Americans, and Hispanics. The lighter Street and SuperLow motorcycles could build on growth in the outreach group and help Harley keep its 54.9% market share of the U.S. heavyweight motorcycle market.

Innovation competition
One of Harley's main competitors, Polaris Industries, has also focused on growing its R&D. The company reinvests 4% of its yearly revenue into R&D ensuring that the expense increases proportionately with the company's overall growth. 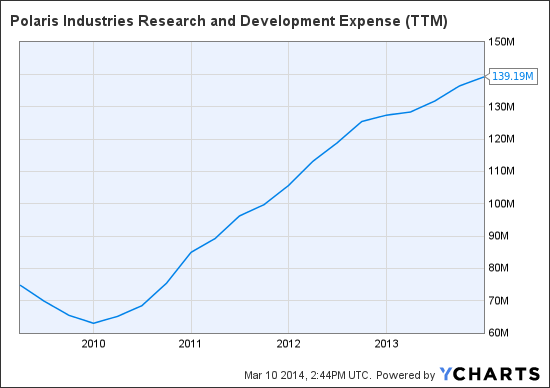 With the relaunch of Indian Motorcycles, Polaris is challenging Harley's heavyweight reign with another classic brand. The company values innovation and I'd expect the company to keep pressure on Harley at it continues to develop the Indian brand.

Honda's motorcycle R&D expense increased 4.9% to over $644 million in the first half of 2013. Honda produces smaller bikes in addition to heavyweight motorcycles, and recently launched medium-weight motorcycles in Thailand. Honda has a larger diversity of motorcycle models to sell, but Harley is still the dominant U.S. heavyweight brand.

Keeping momentum
The announcement of the Low Rider and SuperLow 1200T has brought additional focus to Harley-Davidson and the heavyweight motorcycle market as a whole. The bikes are a product of continued research and development and could help Harley raise sales in its outreach markets during a time of intense competition from Polaris and Honda. Expect Harley to keep its hand on the throttle as it attempts to diversify the heavyweight motorcycle market.