Learn how Twitter could fix its user growth slowdown problem.

Less than one year after its initial public offering, social network company Twitter ( TWTR -2.55% ) could be showing signals of a slowdown in user base growth. According to eMarketer, the company's user base evolution is settling into a pattern of mature growth. Meanwhile, the company's ad rates continue falling. Twitter recently reported that the annual cost to advertise on its platform had dropped 18% in the most recent quarter.

Long-term growth concerns are quite worrying, as investors tend to see Twitter -- which, unlike competitor Facebook ( FB -4.27% ), does not make money at the moment -- as a pure growth stock. Note that Twitter is valued at nearly $30 billion, $7 billion more than professional social network LinkedIn, which delivered earnings per share of $0.39 in the most recent quarter, beating the Street consensus. To justify its amazing valuation, Twitter needs high growth. Can the company deliver it? 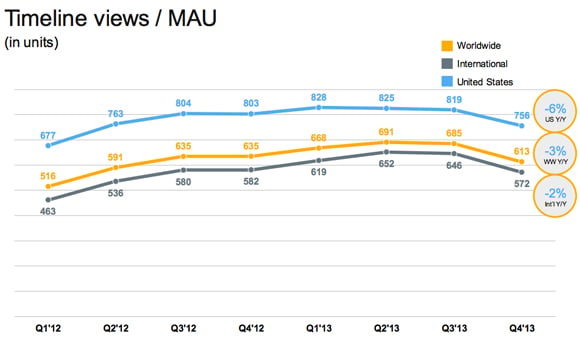 Several challenges ahead
To Quartz contributor Christopher Mims, Twitter's main problem is accessibility. Although it is relatively easy to register, it is hard for a new user to get accustomed to Twitter's code, like @ replies and hashtags. Twitter's secret language probably makes the service more difficult to learn and use than other social networks.

Twitter's poor accessibility may be related with the service's weak retention figures. Note that to date, more than one billion Twitter accounts have been created. Of these accounts, 955 million still exist today, but only 13% of them have tweeted in the last 30 days.

Moreover, according to Twitter analytics company Twopcharts, accounts created in recent years are less active than the ones started by early adopters, suggesting that Twitter has become more difficult to use in the past three years. Only 10.7% of the accounts created in 2012 are tweeting.

Unlike Facebook, Twitter's a niche network
It's worth noting that, unlike Facebook, Twitter isn't for everybody. Using Twitter involves sharing messages --mostly with unknown people -- no longer than 140 characters each, from time to time. This practice could be very popular among certain segments, such as journalists, teenagers, marketers, or celebrities. However, there are plenty of people who are just not interested -- and probably will never be -- in writing tweets.

On the other hand, Facebook is more general. It could be seen as a platform for sharing messages. It could also be used to keep in contact with relatives and friends. It could even be used as a news source, a place to upload pictures, or as a chat room. In this sense, C-net's contributor Dan Farber has made a great comparison between both services: Facebook is like a pulsing digital city, while Twitter is more like a town square, where people -- who might also live in Facebook -- congregate from time to time to share thoughts.

From now on
Despite probably being a niche network, Twitter could still surprise investors in several ways. First, as a niche network, Twitter may not be for everybody, but those who are really into Twitter are not going to replace the service for other alternatives. Some of Twitter's fans may actually be willing to pay in order to get a premium membership, which could allow the company to improve monetization. A stronger focus on earnings could help the company offset worries related to future growth.

To increase growth, the company could use its extreme popularity among certain groups to successfully release stand-alone apps. This strategy has been used by Facebook -- which launched its Messenger stand-alone app in 2011 -- to strengthen its mobile presence. Now Facebook is not only the world's largest social network, but also the owner of a diversified portfolio of high-traffic apps, such as Instagram, Facebook Messenger, and Whatsapp. Finally, Twitter could also be improved by installing a better-designed service. However, whenever adding a new feature or changing the design of an app, companies always risk disappointing some fans.

Final Foolish takeaway
Eight years after its release, it appears Twitter has a growth problem, which could be caused by the service's limited accessibility. However, the company can still find ways to improve both growth and earnings figures, from installing a premium service to releasing stand-alone apps.