It's been over two decades since X-Wing introduced joystick-happy gamers to the Star Wars universe. In its heyday, LucasArts followed that up with fun flight sims, including TIE Fighter, X-Wing Alliance, and my personal favorite, Rogue Squadron. But when the publisher and Lucasfilm were snatched up by Disney (NYSE:DIS) for $4 billion in 2012, the future became cloudier.

Most fans wondered: Would Disney can space combat in favor of first-person shooters? Or would it instead choose to ignore games entirely to focus on a new film trilogy?

The future is here
Thankfully, the answer to both of those questions appears to be a resounding "no." Along with Area 52 and LucasArts, Disney is developing Star Wars: Attack Squadrons, a free-to-play online space combat game. Currently in beta, Attack Squadrons supports up to 16-player dogfights, and locations range from the second Death Star to an array of deep-space environments. In a somewhat different spin than its predecessors, users can customize, and purchase new ships depending on their level of progress. 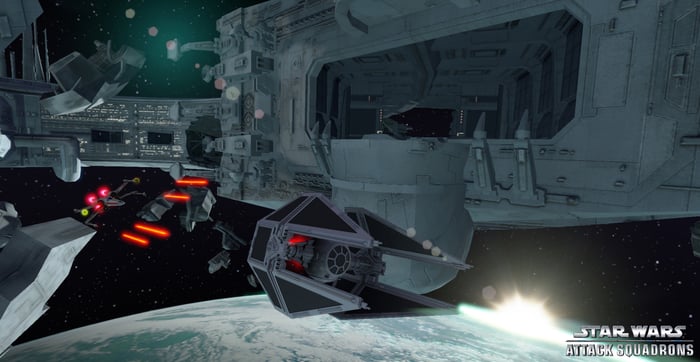 Therein lies the game's business model. Most likely, ship upgrades will be available for purchase. As is the case in many free-to-play games, I expect non-paying players to face limited career development compared to those who pay. Who wants to take on an advanced Tie Interceptor (pictured above) with an entry level X-Wing? Disney should be banking on the fact that in space combat, no player wants to fly the slower, less maneuverable ship.

Delving into the business
Although it's tough to estimate Attack Squadrons' fees, Star Wars: The Old Republic may provide a clue.

Since moving to a free-to-play format two years ago, the massively multiplayer online role-playing game has used a three-tier system. Beyond those who choose not to pay, the game grants "Preferred Status" to anyone who buys an item from its store, which has a few extra perks. "Full subscriber" is the final step, and allows players to pay monthly, bi-monthly, quarterly, or semiannually. The monthly cost is $14.99, with a slight discount offered for a longer commitment.

Disney hasn't released any information about the cost of Attack Squadrons, but again, The Old Republic may provide a blueprint. That game, which began development in 2008, cost $200 million, according to the LA Times, making it the second most expensive video game of all-time. Initial forecasts of its budget, though, were far more modest. Wedbush projected it would cost $80 million and break even at a point between 350,000 and 500,000 subscribers.

Assuming Attack Squadrons costs just half this amount, a break even would be somewhere near 175,000 subscribers. Considering that's in the range where City of Heroes, Warhammer Online, and Everquest II once stood, and far below multi-million subscriber titans like World of Warcraft, it's not unreasonable to think Disney could reach it.

The bigger picture
Of course, the company has bigger plans with the Star Wars universe than just a single game. Initial fan reaction to Attack Squadrons has been mixed, and some claim they're more excited for a third Battlefront game, which is slated for a 2015 release. There's also Episode VII to focus on, along with the animated Star Wars Rebels and a rumored Boba Fett spin-off movie.

If the latest free-to-play space combat game reveals anything, though, it's that Disney doesn't plan to ignore the original trilogy -- Attack Squadrons appears to be almost entirely based in it. That's good news for fans who grew up in a galaxy far, far away.