Drug companies are staples in dividend investors' portfolios thanks to their predictable demand and solid cash flow. However, many drug companies, including AbbVie (NYSE:ABBV) and Pfizer (NYSE:PFE), have seen dividend yields fall as markets have pushed shares to new highs.

Although it may be tempting to simply buy the company with the higher dividend yield, patent expiration is likely to take a big bite out of profit at these two companies over the next three years. That suggests investors should consider patent exclusivity, payout ratios, and pipelines before committing to buy shares. 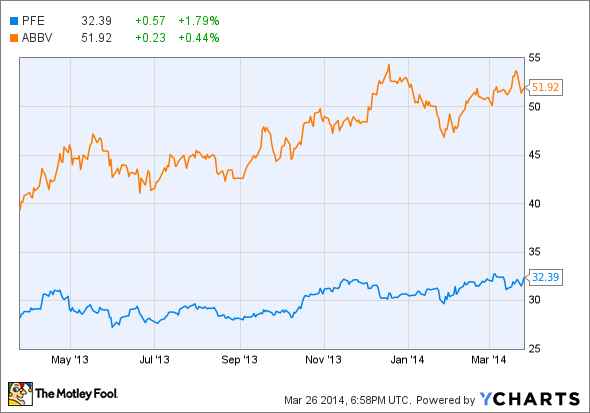 Comparing patent portfolios
Pfizer lost a big chunk of revenue when Lipitor, its top selling cholesterol fighting drug, lost its patent protection in 2011. Lipitor was a massively successful drug for Pfizer, generating peak sales near $13 billion a year in 2006. Since losing exclusivity, sales of Lipitor have sunk to just $2 billion in 2013.But that's yesterday's news. Instead, investors should be worrying about Celebrex's patent protection. Celebrex, its $3 billion-a-year drug for osteoarthritis and rheumatoid arthritis, will lose exclusivity at the end of 2015.

While Celebrex's expiration puts a sizable stake of Pfizer's sales up for grabs in 2016, AbbVie may face an even bigger threat when Humira, its best selling drug, goes off-patent in the U.S. at the end of 2016.

Humira accounted for nearly 60% of AbbVie's revenue in 2013, and competitors like Novartis' Sandoz generic unit are already working on potential Humira biosimilars. Sandoz advanced its Humira copycat into phase 3 trials in December.

Those patent expiration risks are important, given that falling revenue could affect the amount of dividends these companies pay in the future. The good news is that both companies appear to be generating plenty of cash to maintain their current payout rates -- at least for now. The cash dividend payout ratio, which divides dividend payments by operating cash minus capex and preferred dividends, is 40% at Pfizer and 44% at AbbVie. Those numbers are OK, but if they surge investors should worry. 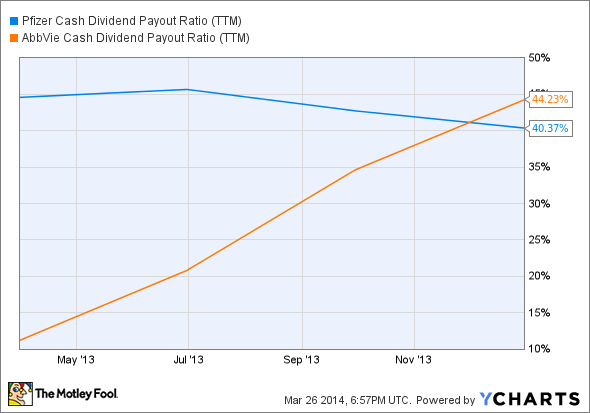 Debating products and pipelines
Pfizer's Lyrica is making up some of the ground lost when Lipitor went off-patent. Lyrica, its treatment for diabetic neuropathy and fibromyalgia, posted sales of $4.5 billion last year, up 11% from 2012. Pfizer's two recently launched cancer drugs, Xalkori and Inlyta, are also seeing sales grow. Those two drugs produced $200 million in revenue during the fourth quarter. Pfizer also hopes sales will pickup for its rheumatoid arthritis drug Xeljanz, a JAK-inhibiting oral therapy. If so, Xeljanz can protect some of the sales Celebrex will lose when it goes off-patent. Despite those bright spots, Pfizer's sales still fell 6% to $51 billion last year.

If Pfizer is going to return to top-line growth, it will need a few wins from its pipeline. Palboiclib and RN316 are among the closest to commercialization. Palbociclib's success in late stage trials as a treatment for ER+ and HER2 breast cancer patients has investors hoping for a quick path to approval. And RN316 is one of three late stage PCSK9 cholesterol fighting drugs in development -- the other two are being developed by Regeneron and Amgen -- that could enter a market eager for new therapies to lower bad cholesterol.

AbbVie's sales held up a bit better than Pfizer's in 2013. Revenue grew roughly 2% from 2012 to $18.8 billion; however, that masks a 2% year-over-year decline in sales to $5.1 billion in the fourth quarter -- a quarter in which Humira's sales climbed more than 13% worldwide. Outside of Humira, AbbVie boasts only one other blockbuster treatment: AndroGel, and its sales fell 10% last year to $1 billion.

Fool-worthy final thoughts
The ability to increase sales for current therapies and produce new winning treatments will go a long way to determining whether Pfizer and AbbVie can boost their dividends in the future. Currently, dividend yields for both Pfizer and AbbVie are nearly identical at 3.23% and 3.26%, respectively. Operating margin, which reflects the ability of the companies to deliver investor friendly profit, are similarly matched at roughly 30% for both companies.

Pfizer already faced its biggest patent threat when Lipitor lost exclusivity. Celebrex, while an important drug, represents just 6% of Pfizer's annual revenue, so it's unlikely the dividend is in jeopardy anytime soon. The issue is foggier at AbbVie given Humira represents more than half of the company's sales.

Since Humira's patent runs through 2016, investors have time to see whether compounds making their way to market can offset threats to AbbVie's sales. But that means AbbVie investors should keep a close eye on its pipeline over the next two years.