But few of us can invest in every single dividend-paying stock on the market, and even if we could, we're likely to find better gains by being selective. Today, two paint-producing companies will square off in a head-to-head battle to determine which offers a better dividend for your portfolio.

Tale of the tape
Founded in 1883, PPG Industries (NYSE:PPG) is one of the largest suppliers of protective and decorative coatings in the world, but it also manufactures flat glass for buildings and continuous-strand fiberglass for aircrafts. Headquartered in Pittsburgh, Penn., the company supports industrial, transportation, consumer products, and construction companies in more than 70 countries around the world.

Founded in 1866, Sherwin-Williams Company (NYSE:SHW) is not only the largest producer of paints and coatings in the United States, but is among the world's largest paint manufacturers after Akzo-Nobel and Henkel. Headquartered in Cleveland, Ohio, Sherwin-Williams sells paints, applicators, coatings, and automotive finishing and refinishing products through more than 4,000 company-operated stores and a network of third-party facilities and merchandisers to home centers, independent dealers, and automotive retailers around the world.

Round one: endurance (dividend-paying streak)
Sherwin-Williams paid their first dividend in 1979 and has been paying ever since. But Sherwin-Williams' 35-year streak can't hold a candle to PPG Industries, whose dividend history dates all the way back to 1899. A century-plus dividend streak lets PPG Industries capture the endurance crown without breaking a sweat.

Round two: stability (dividend-raising streak)
According to dividend.com, Sherwin-Williams has increased its dividend payouts every year since it first paid in 1979, which means that it has a 35-year dividend-raising streak. But PPG Industries has raised its quarterly dividends for over 41 years in a row since starting the practice in 1973. Sherwin-Williams and PPG are both part of the Dividend Aristocrat, Dividend Achiever and U.S. Dividend Champion list, but only one can win this round, so PPG takes the point again. 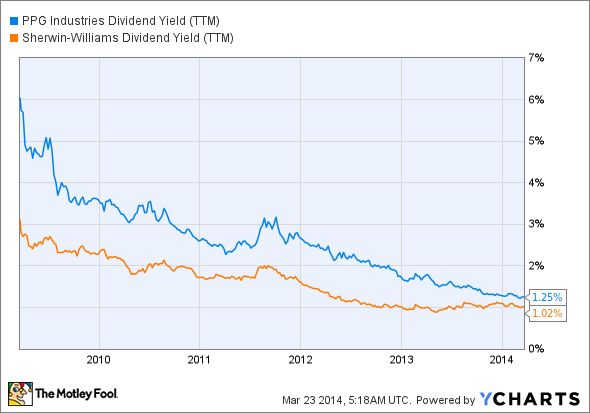 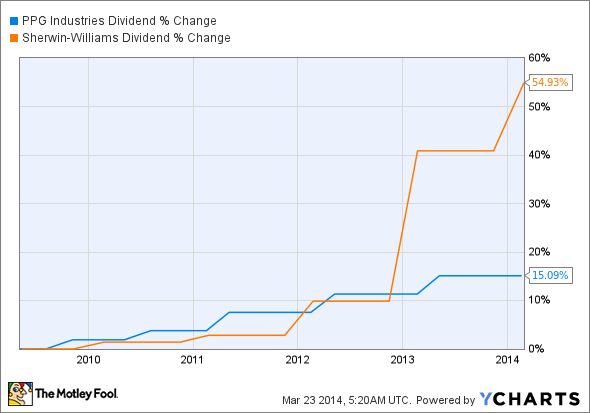 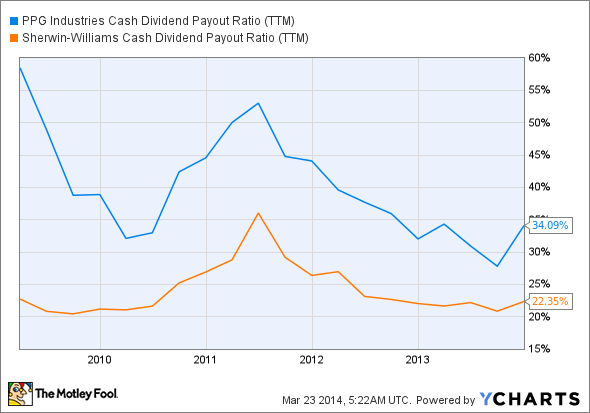 Bonus round: opportunities and threats
PPG may have won the best of five on the basis of its history, but investors should never base their decisions on past performance alone. Tomorrow might bring a far different business environment, so it's important to also examine each company's potential, whether it happens to be nearly boundless or constrained too tightly for growth.

One dividend to rule them all
In this writer's humble opinion, it seems that PPG has a better shot at long-term outperformance, thanks to broader exposure to the automotive and aerospace industries, which seem poised to grow rapidly over the next few quarters. Additionally, PPG's acquisition of AkzoNobel's North American segment adds a strong geographical presence to the company's retail efforts. PPG and Sherwin-Williams are both likely to benefit from a rebound in domestic construction and housing, but they might also face tougher competition from Valspar. Sherwin-Williams' tighter focus is an advantage so long as it maintains its lead in housing and construction, but it's unlikely to remain unchallenged for long. You might disagree, and if so, you're encouraged to share your viewpoint in the comments below. No dividend is completely perfect, but some are bound to produce better results than others. Keep your eyes open -- you never know where you might find the next great dividend stock!