All four U.S. wireless carriers are vying for more spectrum in a big spectrum auction next year -- and for some it's a fight for their life.

Next year the Federal Communications Commission will auction off low-band spectrum U.S. wireless carriers use for data and voice transmissions. It's one of the most notable of such auctions since 2008, and it's causing Verizon Communications ( VZ -0.59% ), AT&T ( T 0.39% ), T-Mobile ( TMUS -2.05% ), and Sprint ( S ) to spend millions in lobbying.

The big four are all hoping to shore up their positions in the wireless industry, but with the bidding rules still in limbo the companies with the deepest pockets may tilt the scales in their favor.

What's in a number?

The companies are fighting over new blocks of 600 MHz wireless spectrum, the kind that can travel across long distances and isn't as inhibited by buildings as higher range spectrums are. This low-band frequency is some of the most valuable spectrum ever available to wireless carriers.

But the companies are in disagreement as to how the auction should be structured. Sprint and T-Mobile, the smallest of the four carriers, want the wireless spectrum bidding capped so that no one company can spend too much on certain spectrum blocks. This would help ensure that Sprint and T-Mobile can get the spectrum they need and keep themselves competitive against the two dominating carriers.

But Verizon and AT&T argue that they should be able to bid for spectrum without caps and that instituting any limits will hurt revenue auction. Considering the two juggernauts control a whopping 74% of prime spectrum in the U.S., it's hardly a fair fight at this point. If they succeed in getting what they want, the No. 1 and No. 2 carriers will own almost all of the best spectrum that's available.

Pay to play
To get their voices heard, each carrier is spending piles of money to lobby the government. Not surprisingly, AT&T and Verizon have far outspent T-Mobile and Sprint. Here's a look at how much the carriers spent just last year: 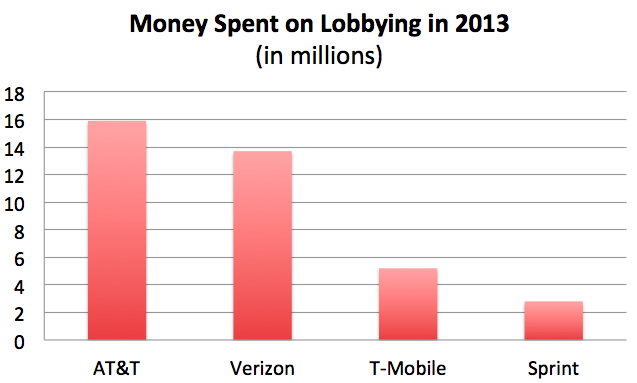 Of course, not all of the the money is for influencing next year's auction, but a significant portion has funded research publications intended to convince lawmakers of specific viewpoint.

In a report published last week, The Center for Public Integrity said, "AT&T and Verizon Communications are two of the most effective lobbies in Washington, ranking among the top 20 spenders each year since 2003."

The Center provided some historical data comparing lobbying dollars spent by the four carriers over the past four years. Take a look below: 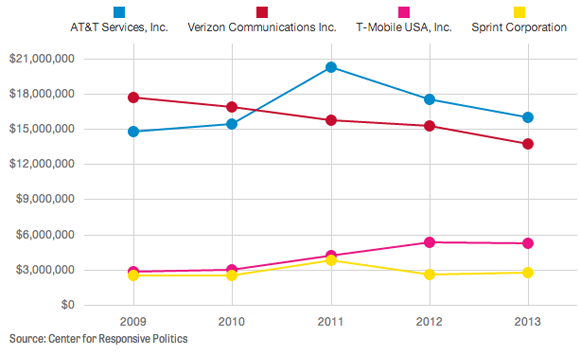 The report went on to mention that the bigger the pockets of these companies, the more influential their lobbying efforts. The report said that a recent Senate meeting last month of lawmakers, wireless companies, and their lobbyists had at stake "nothing less than control of the growing wireless market and the hundreds of billions of dollars that go with it."

In sum, these companies are paying big dollars to try to convince lawmakers that next year's auction rules should coincide with what they want.

How this may play out
Next year's auction could push AT&T and Verizon far beyond the reach of T-Mobile and Sprint, or it could help the smaller companies close the competition gap. Which way it will end up is really anyone's guess right now. The No. 1 and No. 2 carriers are clearly spending more in making sure the FCC looks favorably on them. Luckily, the U.S. Justice Department so far agrees with T-Mobile and Sprint that capping bids in the upcoming auction is a fairer approach.

But the debate is far from over, and not one of carriers is going down without swinging. Investors should play close attention to how the FCC ends up structuring the 2015 auction, as the result will likely have long-term effects on the U.S. wireless industry landscape.

Amid the 'Great Resignation', Could Companies Start Adopting the 4-Day Workweek?

Could the 4-Day Workweek Solve the Labor Crisis?

What Are the Key Factors Driving the "Great Resignation"?