Please ensure Javascript is enabled for purposes of website accessibility
Free Article Join Over 1 Million Premium Members And Get More In-Depth Stock Guidance and Research
By Todd Campbell - Mar 27, 2014 at 9:30AM

Gilead (GILD) and AbbVie (ABBV) are set to face off against one another with new therapies for hepatitis C, but is one a better buy than the other?

The hunt for a cure to hepatitis C has been one of the most active areas for drug development in recent years. Investments to develop a new class of oral treatments requiring shorter treatment periods and fewer side-effects spawned two newly approved drugs for the disease last year, including Gilead's ( GILD -0.16% ) highly anticipated Sovaldi.

The FDA could approve an additional therapy from AbbVie ( ABBV 1.69% ) this year too. The promise of these new hepatitis C treatments has helped drive shares to new highs, but with markets selling-off, investors may be getting the best opportunity to buy in a while, suggesting it may be a good time to consider whether one of the two companies is a better buy. 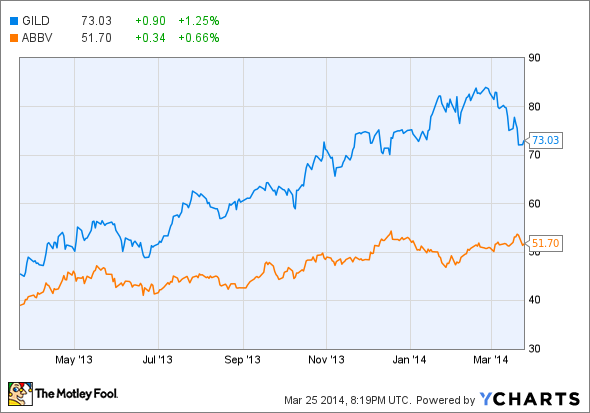 Debating earnings
Both Gilead and AbbVie are highly successful drug developers with top selling therapies and deep product pipelines. Gilead generates $9 billion a year from it franchise of life-changing HIV drugs, and AbbVie's Humira is one of the world's top selling treatments, with annual sales north of $10 billion.

But it's Gilead that has the edge when it comes to transforming those sales into shareholder-friendly profit. Gilead's operating margin has been 40% over the past 12 months, roughly 10% higher than AbbVie's. 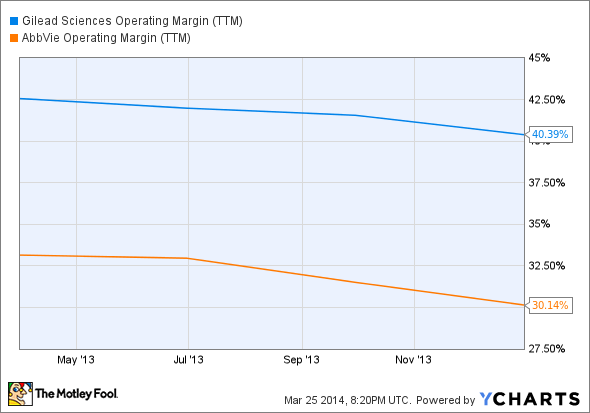 Gilead's thick margin has analysts increasingly convinced that earnings will go sharply higher this year, especially given Sovaldi's encouraging inventory building in December. Despite only being on the market for one month last quarter, that inventory stock-piling resulted in Gilead recording $140 million in Sovaldi sales in Q4.

Based on the early results, analysts have increased their estimate for Gilead's 2014 earnings per share from $3.27 to $3.80 over the past 90 days. They've also boosted their outlook for 2015 too. Industry watchers are now expecting $5.69 in EPS for 2015, versus $5.18 predictions three months ago.

Their enthusiasm is a contrast to growing pessimism over AbbVie. AbbVie's top selling drug Humira is facing new competitors, including Johnson & Johnson's ( JNJ 1.46% ) Stelara. Johnson's Stelara won FDA approval for psoriasis in 2009 and for psoriatic arthritis in 2013, and sales of the drug marched 46% higher to $1.5 billion last year. Pfizer's Xeljanz, an oral treatment for rheumatoid arthritis approved in 2012 may also eat into Humira market share. And the FDA just recently approved Celgene's oral Otezla for psoriatic arthritis too.

Those competitive pressures, coupled with uncertainty as to whether AbbVie's three drug hepatitis C cocktail will come to market before Gilead's next two drug combination of Sovaldi and ledipasvir, has analysts ratcheting down their outlook for this year and next year. Over the past 90 days, analysts have taken expectation for AbbVie in 2014 down from $3.19 to $3.11. If AbbVie delivers on that estimate, it would mark a slight year-over-year decline from the $3.14 per share it earned in 2013.

Debating valuation
Despite expectations that AbbVie's earnings will flatten this year, analysts do think earnings will climb in 2015 to $3.62 per share. That means investors are only paying about 14 times next year earnings to buy AbbVie shares.

While that's far from pricey, Gilead appears even cheaper. Investors are only paying about 13 times forward earnings to own its shares.

Neither company is cheap relative to sales; however, Gilead holds an even bigger valuation advantage when considering the price to earnings relative to earnings growth, or PEG ratio. Typically, a PEG ratio south of 1 may indicate that investors are under-pricing the potential for earnings expansion. That means Gilead's 0.53 ratio is particularly attractive. AbbVie's is much higher, at 3.57.

Fool-worthy final thoughts
The race to deliver new combination therapies for hepatitis C designed to eliminate the use of side-affect laden interferon and ribavirin will heat up this year as both Gilead and AbbVie file for approval. Gilead sent along its application to the FDA in February, and AbbVie has been forecasting its submission will be filed by mid-year.

Since Gilead is likely to get the nod before AbbVie, investors are wise to wonder whether there will be enough room for AbbVie's cocktail to carve away significant sales in the indication, particularly given Bristol-Myers daclatisvir is also likely to be vying for market share. Given Gilead already has a substantial -- and growing -- slate of HIV drugs, an approval for Sovaldi, and may soon add a cancer fighting drug to its product lineup. Gilead appears to have a sales growth advantage, and its operating margin suggests a bottom line advantage too.

That suggests Gilead is the more attractive option of the two. However, a wild card exists in the form of payer pushback on Gilead's $84,000 price tag for Sovaldi. That said, price pressure isn't a new issue, for Gilead given its faced pricing scrutiny for its HIV drugs in the past.