There's no denying the increasing popularity that the solar industry has enjoyed in 2013. According to the Solar Energy Industries Association, photovoltaic, or PV, installations increased 41% over 2012, and the average price to install a system dropped 15% from 2012. Looking to benefit from this trend, investors may opt to invest in PV manufacturers -- but with so many to choose from, it can be a daunting task to pick just one.

Let's take a look at two industry leaders, Canadian Solar (NASDAQ:CSIQ) and Jinko Solar (NYSE:JKS). Both have made their investors quite happy over the past twelve months, but which one currently offers a better buying opportunity? 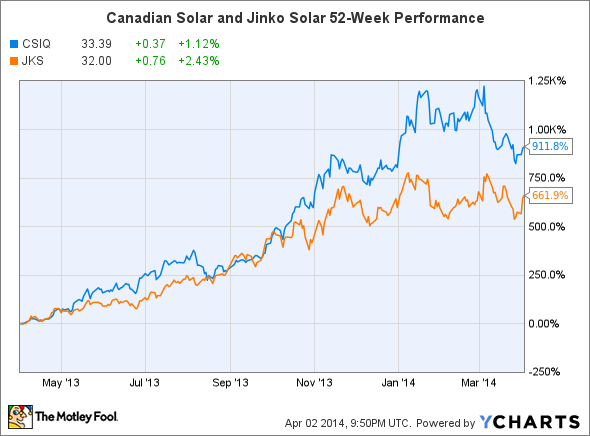 Round 1: Yearnings for earnings
Sure, the residential, commercial, and utility-scale markets are increasingly going solar, but the majority of Chinese PV manufacturers have been operating at a loss for quite some time. That's why those who follow the industry take note when a company shows gains. Canadian Solar and Jinko are two companies that have broken through the clouds and rewarded investors with the shining light of profits.

Of the two companies, though, Jinko Solar stands out as the better choice. Its diluted EPS has been growing consistently throughout 2013, whereas Canadian Solar stumbled in the fourth quarter. Jinko Solar also offers investors a better return on equity. Jinko's 12.40% edges out Canadian Solar's 9.86%, but Jinko has been outpacing Canadian Solar, and if the trend continues the same way the disparity between the companies will continuously increase. Considering both metrics equally, Jinko wins the round. 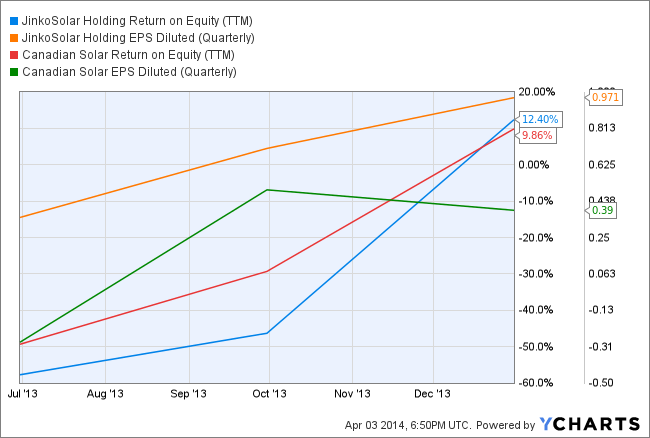 The analysis of Canadian Solar's profitability comes with one caveat. Management is waiting on a court ruling regarding a contract dispute with LDK Solar. If the ruling adversely affects Canadian Solar, then management will have to make a provision in its fourth quarter and full-year 2013 earnings, which would affect the company's profitability.

Round 2: Managing debt
Have Jinko and Canadian Solar taken on too much debt in order to grow profits? Not at all. Over the past year, both companies have managed to adeptly handle debt. Canadian Solar outperforms Jinko in this metric though, ending the year with a debt-to-equity ratio of 2.381, which beats Jinko Solar's 2.680. More impressive, though, is the rate at which it's improved on this over the past year -- nearly 50% better than Jinko. 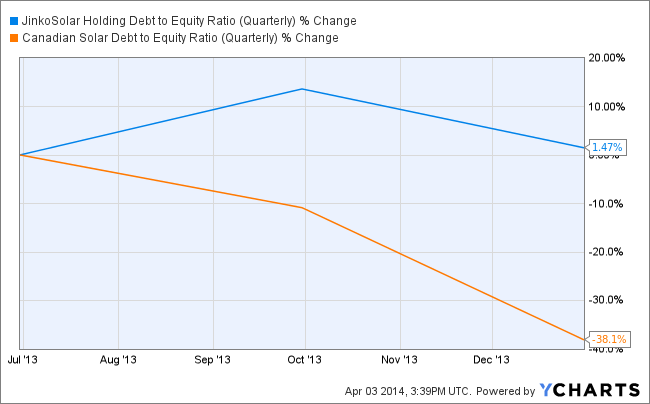 Round 3: Better bargain
Of the two companies, which one is the better value? As of now, Jinko takes that honor. 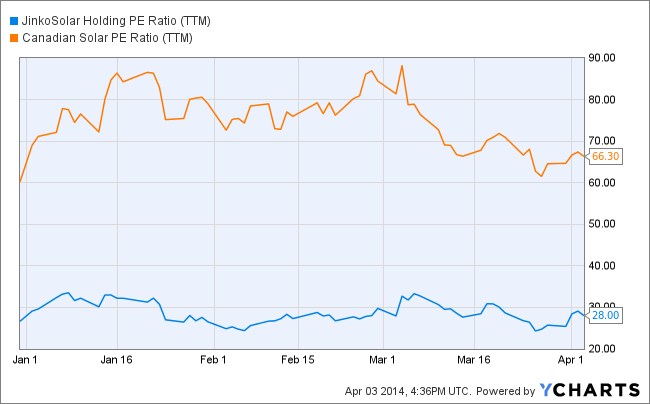 Canadian Solar's P/E ratio is considerably higher than Jinko's. Are Canadian Solar's prospects so much greater than Jinko's that it warrants paying such a hefty price? I don't think so. Jinko completed 213 MW of downstream projects in 2013, and it is guiding to complete more than 400 MW in 2014. According to management, downstream projects are an excellent opportunity -- gross and net margins for downstream business exceed 60% and 30% respectively. Furthermore, management believes that it is in a "unique position to directly benefit from the expected growth in the rapidly expanding downstream project business that has only just begun to show potential."

Foolish conclusion...
Both Canadian Solar and Jinko Solar offer compelling arguments for investment, and I'd be happy to have either one of them in my portfolio. At this point, though, I think Jinko is the company that offers a better value.