Pursuing growth at all costs is not a sustainable investment strategy. Even young investors with a stomach for volatility have much to gain by investing in steady dividends. During the 90s high growth rates made it easy to focus almost exclusively on asset price appreciation, but now things have changed. Kinder Morgan (NYSE:KMI) is a quality dividend stock and it is time that all sorts of investors learn the benefits of investing in a stable and high-yielding business. 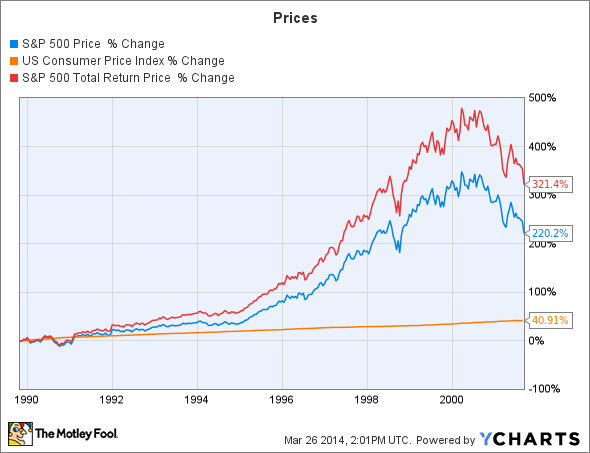 The '90s were a great time for many. You could make a killing by just buying broad-market ETFs like the S&P 500 Depository Receipts and watching prices shoot upward. The above chart shows how much you could have made by simply investing back in November 1989. Here dividends would have helped you, but asset appreciation provided the majority of gains. 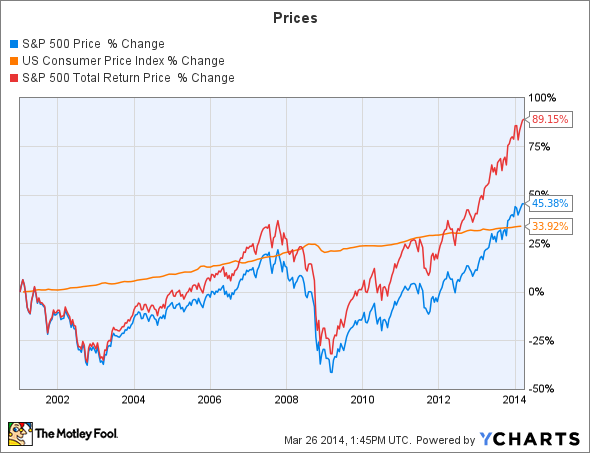 The post-2001 world has not been so rosy. The above chart shows how investing in the S&P 500 and ignoring dividends would have given you a current return just 11.46% above inflation. By including dividends you beat inflation by 55.23%. In other words, the vast majority of inflation-beating returns came from dividends, not rising asset prices.

Why is there such a disparity?
In 1989 the Berlin Wall fell and America became a hegemon. This was a huge boom for American corporations and the S&P 500. Suddenly, the American-sponsored world was the major export market for developing nations. The death of the Soviet Union meant a whole new batch of countries wanted to do business with America and its businesses. Since the Soviet empire was in shambles, developing the nations like China and India had little choice but to further integrate themselves into the American empire.

In 2001 and beyond the power equation shifted. America slowly realized that the world was not as unipolar as it had been. With Russia's recent acquisition of Crimea and China's continued push for regional dominance, the world is returning to a multipolar system. Countries that choose to align themselves with Russia or China suddenly become much smaller markets for U.S. firms. As an example just look at how China's African aid packages mean fewer contracts and concessions to U.S. firms.

Kinder Morgan is a great example of a company that can thrive in this environment. The midstream firm is involved in everything from natural gas pipelines to CO2 production and product pipelines.

Energy is a global industry, but Kinder Morgan carries little political risk. Its wide range of North American pipelines gives it steady income and cash flow. It enjoys huge barriers to entry. The capital costs to get into the midstream business are massive, and political barriers mean that even well-financed pipelines like the Keystone XL can get stuck on a politician's desk.

Kinder Morgan offers many ways to access its steady income. Kinder Morgan is a C corporation and expects to pay a $1.72 dividend in 2014, a forward yield around 5.4%.

If you are interested in a more tax-efficient solution the MLP Kinder Morgan Energy Partners LP (NYSE: KMP) controls Kinder Morgan's growing Canadian operations along with its other divisions. Its expected 2014 per unit distribution of $5.58 implies a forward distribution yield around 7.6%. If you don't want to deal with filling the requirements of an MLP then Kinder Morgan Management LLC (NYSE: KMR) is a great alternative. It is effectively a version of Kinder Morgan Energy Partners that pays dividend in stock and trades as an LLC. It has a slightly higher expected 2014 forward yield, 7.9%.

For a less diversified but growing natural gas pipeline MLP, El Paso Pipeline Partners LP (NYSE: EPB) is a good option. Kinder Morgan is returning to a pure general partner and is pushing more assets into El Paso. It already has an expected 2014 per unit distribution of $2.60 and a corresponding forward yield around 8.9%.

The bottom line
Dividends are a critical part of any portfolio, but they are even more critical in a multipolar world where multiple state actors are competing for influence and power. Betting on rising asset prices only takes you so far when everyone is competing for the same limited number of markets.

Kinder Morgan's various expected 2014 yields are far above the S&P 500 depository receipts' yield of 1.9%. A higher yield means more money in your pocket on a dependable basis. For tax efficiency KMP and KMR are good options. If want to stick with traditional C corporations, then check out KMI.

Kinder Morgan Inc. Is the Stock for the New World @themotleyfool #stocks $KMI Next Article
Current