When stocks like athenahealth (NASDAQ:ATHN) are priced to perfection, even a seemingly strong quarter can disappoint.

This week, athenahealth told investors that its sales jumped 30% year-over-year thanks to rising demand for its cloud based software for physicians. Despite that significant bump in sales, investors punished shares, adding to a slide that has taken athena's share price from above $200 in February to the mid $130's since. Let's take a closer look at the first quarter earnings report to see what's behind the big drop. 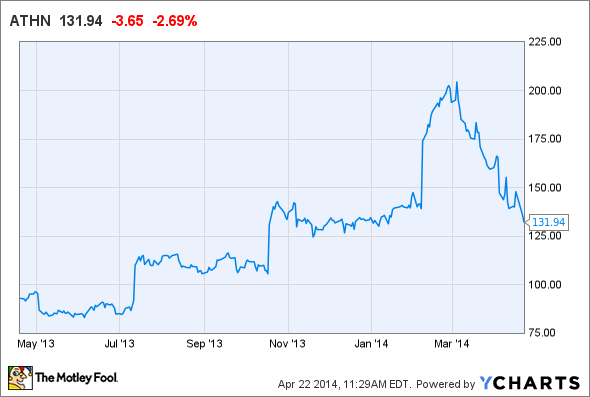 Good news...and bad news
It's hard not to like athena's top line performance. Sales grew 30% to $163 million in the first quarter.

And investors should be encouraged by the C-suite's confidence that that growth rate will continue given that Jonathan Bush, the company's CEO, announced during the first quarter earnings release that athena is positioned to "continue on our 30 percent growth trajectory."

Confidence in the company's future sales is inspiring; however, it does little to address the elephant in the room: athena's lackluster earnings.

Despite healthy gross margins near 60%, athena's operating margin was just 5.4% of sales in the first quarter. That translates into an anemic $9 million in profit, or an adjusted $0.12 per share in earnings. That's hardly encouraging given the operating margin last year was higher, resulting in earnings per share of $0.38 in the first quarter of 2013.

Investing for the future
The argument to invest in athena has been -- and remains -- the potential to transform health care providers from paper dependent to technology savvy.

There's obviously a significant need for providers to improve how they record, share, and analyze information. Those improvements can help physicians do everything better, from managing revenue to communicating with patients.

However, building out the software systems that allow physicians to make that leap has been -- and remains -- expensive. In the first quarter alone, athena spent $15 million, or 9.7%, of its $154 million in sales on R&D.

Building scale
More than 50,000 providers were using the company's athenaCollector practice management software as of December, up from less than 40,000 the year before. The number of providers using athenaClinicals, the company's electronic health records, or EHR, product jumped 54% in 2013 to nearly 17,000.

And customers using athenaCommunicator, a patient-facing health records solution that allows doctors to reduce no-shows, target patients with relevant services, and reduce staff time spent on the phone thanks to online scheduling and self-pay features, grew more than 100% to over 28,000 last year too.

However, for athena to maintain those levels of growth it will need to continue to outperform competitors including Epic Systems, eClinicalworks, and Allscripts (NASDAQ:MDRX). Those three control nearly a third of the share for the EHR market. Additionally, the company also competes against Quality Systems (NASDAQ:NXGN) in practice management software.

While we'll have to wait until May 8th to see how Allscripts performed in the first quarter, Allscripts' sales in the fourth quarter fell from an adjusted $368 million a year ago to $354 million. Adjusted earnings also fell, dropping from $0.16 to $0.08.

Similarly, investors will be watching in May to see whether Quality Systems results shift positive again. In Quality Systems' fiscal third quarter, which ended in December, sales dropped 5% from last year to $109 million.

During Quality's conference call, the company suggested that it was moving beyond recent struggles within the company's hospital business, and that the acquisition of Mirth, a company that offers open-source data inter-operability software, is providing it with momentum. Investors hope that's true given the company's sales fell from $349 to $329 million in the first nine months of its fiscal year.

Fool-worthy final thoughts
Fast growing superstars like athena have to keep delivering if they expect investors to prop up their nosebleed valuations, and while 30% revenue growth trailed the company's internal forecast, it still marks a bump up in market share.

Investors should also recognize that health care software providers do have a fair amount of seasonality in their business, given that a portion of their revenue is tied to health care provider revenue, which can be affected by holidays, annual deductibles, and the flu season.

While that doesn't mean you should give athena a free pass, it may suggest you consider the company over multiple quarters, rather than just one.

The company expects its full year sales will total between $725 and $755 million this year, up 18% at the low end from 2013. So, it's likely athena will keep delivering solid top line results. But hopes for earnings should remain tempered. The company expects EPS will be just $0.98 to $1.10 this year, below the $1.16 earned last year. Since luke-warm earnings are on tap, it appears athena remains best suited for growth investors willing to make a bet that earnings will come later, rather than sooner.