At the close of the market on April 25, shares of Zynga (NASDAQ:ZNGA) fell more than 6% to finish the session at $4.08. With the video game maker's stock trading at a 31% discount from its 52-week high of $5.89, some investors might be asking themselves if now is a prime time to jump in and buy a nice stake. While it's possible that Zynga could be a nice investment going forward, should investors buy a piece of the company or bail and consider King Digital (NYSE:KING.DL) instead?

Zynga's been experiencing some growth problems lately!
For the past three years, Zynga has been somewhat of a mixed bag for its shareholders. Between 2011 and 2012, the maker of games like PetVille, FarmVille, and Words with Friends saw its revenue tick up 12% from $1.1 billion to $1.3 billion. In its 2012 annual report, management attributed this rise in sales  to a 7% increase in online game revenue and an impressive 84% jump in advertising revenue; both of those metrics were driven by a 24% improvement in monthly active users (MAUs) from 240 million to 298 million. 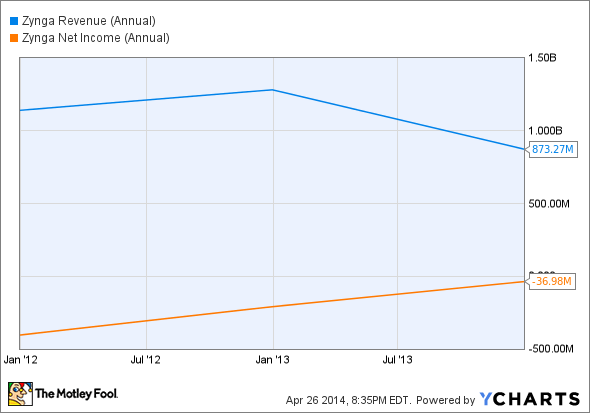 This did, however, change for the worse during 2013. For the year, revenue dropped a whopping 32% from $1.3 billion to $873.3 million. While advertising revenue for the company dropped 17% year over year, the largest driver behind lower revenue was the 34% decline in online game revenue; the number of MAU's plummeted 62% from 298 million to 112 million.

Probably the only thing Zynga's had going for it over this time frame was its improving profitability. Even though the business booked a net loss every year between 2011 and 2013, its loss narrowed each year, falling from $404.3 million to $37 million.

Despite higher sales, management reported that its research and development fell from 64% of sales to 48%, while its selling, general, and administrative expenses declined from 21% of sales to 12%. In its annual report, management chalks up the drop in its R&D expenses to decreased stock-based expenses, while its SG&A expenses dropped because of a mixture of stock-based expenses and lower content-acquisition costs.

Is King Digital the true face of online gaming?
Between 2011 and 2013, King Digital has done far better than Zynga. During this three-year period, the video game maker reported that revenue soared 284% from $63.9 million to $1.9 billion. Unlike Zynga, King Digital's success has been the result of a significant increase in MAUs over this period. Unfortunately, the company's earliest disclosure for MAUs was the first quarter of its 2012 fiscal year, but since then its user count has increased 1,260% from 30 million to 408 million. 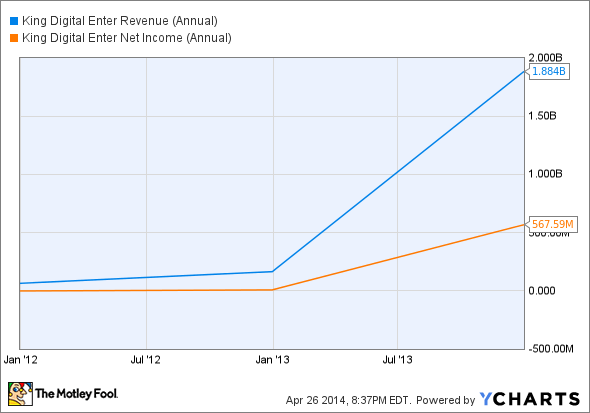 Although the company enjoyed an attractive rise in revenue from its web operations, the main contributor to its meteoric rise was its mobile operations, which saw sales increase from $30 million to $1.3 billion. The driver behind this was the company's release of Candy Crush Saga, which became immensely popular among mobile users.

This revenue increase allowed the business to post significant bottom-line growth over the past three years. Between 2011 and 2013, King Digital's net income rose from -$1.3 million to $567.6 million. In addition to benefiting from higher revenue, the company reported a reduction in most of its costs as a percentage of sales, mostly because of improvements in its economies of scale.

Foolish takeaway
Right now, Zynga is having a pretty difficult time. Mr. Market seems to understand that, hence the discount in share price. The situation appears to be getting worse. Management expects revenue to fall between 31% and 39% to between $140 million and $160 million from the $230.7 million the company reported during the second quarter of 2013.

Meanwhile, rival King Digital looks to be picking up where Zynga has fallen short and doesn't look to be losing steam just yet. For this reason, combined with the company's higher profitability metrics, it's hard to argue that Zynga is a better prospect than King Digital.

Moving forward, King Digital will have to retain its customer base if it wants to avoid following in Zynga's footsteps. Whether or not this can happen is something that investors will have to observe as developments take place; but if the company can hold onto its customers, then the potential for returns could be phenomenal. In the event that it loses user appeal like its rival has, the company (and its shareholders) could be in for a great deal of pain down the road.

Is Now the Time to Bail on Zynga? @themotleyfool #stocks $ZNGA $KING.DL Next Article
Current