Buying engineering component manufacturer Illinois Tool Works (NYSE:ITW) is never going to be the raciest of investment propositions; however, the company is quietly going about the business of improving its prospects in 2014, and it deserves a close look. The company's recent results produced three key takeaways for investors to like about the stock, and provided plenty of information that would be useful investors in peers like Danaher Corporation (NYSE:DHR) and Rockwell Automation (NYSE:ROK)

Overall operating income increased by 16% even though revenue was only up by 4%. A quick look at a breakdown of operating income reveals how Illinois Tool Works generated its earnings in the quarter. 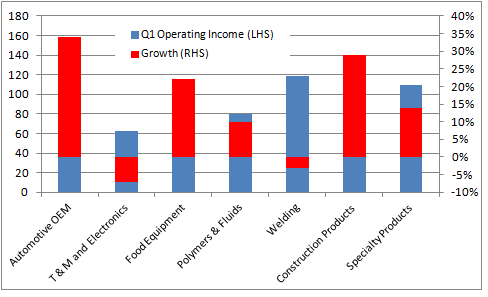 Clearly, Automotive, Food Equipment and Construction products provided the stand out performance in the quarter. However, Fools shouldn't get too excited by the automotive sector. It's been strong for a while now, but management forecasts that auto build rates will moderate to 1%-2% growth in the second quarter. Indeed, Rockwell Automation made a similar argument in its recent quarterly results. It doesn't mean that the auto sector will be weak, rather that growth will moderate.

Three reasons to like Illinois Tool Works after the results
The first reason is that, once again, its guidance looks a little bit conservative. Several industrial companies have come out recently and reported that industrial conditions are strengthening. For example, Danaher seems to have turned the corner with its industrial technologies segment and the industrial supply companies have been making more bullish noises recently. Indeed, Illinois Tool Works raised its full-year EPS guidance by $0.15 to $4.45-$4.65, putting the stock on a forward P/E of 18.8 times the mid-point of guidance.

However, the hike in guidance was attributed to being half due to increased share repurchases -- so it's not just about improved operating performance. Moreover, management did raise its full-year revenue forecast to 3%-4% from 2%-3% previously, but it didn't adjust its organic growth rate forecast of 2%-3%. This is somewhat puzzling, because its organic growth rate over the last two quarters has been 2.8% and 3.3% respectively. It's forecast implies a moderation in growth, but is Illinois Tool Works being too conservative?

The second reason is down to its ability to leverage revenue growth into profit growth thorough margin expansion. The company's EPS guidance implies an increase of 25% in earnings, but revenue is only forecast to grow by 3%-4%. The principle reason for this is the way the company is expanding margins. For example, five of its seven segments saw a increase in margin in the quarter. 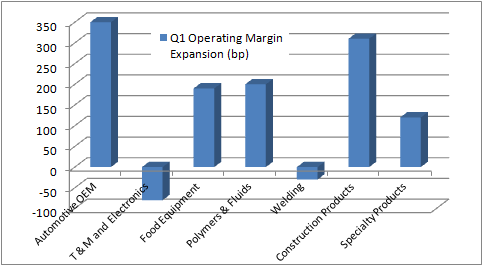 Moreover, management reaffirmed its belief that all its segments would see margin expansion in 2014, and de-dacto upgraded its guidance to operating income margins of "mid 19s" from 19% previously.

Thirdly, Foolish investors can expect some improvement in certain segments of its operations. For example, its most cyclical segments are welding and the test & measurement and electronics segments (note how they saw a reduction in margin in the quarter), and they are likely to improve provided the industrial capital spending environment improves. Indeed, Danaher also reported weak conditions in its test & measurement segment.

Of course, there is no guarantee that the highly cyclical segments will turn for Illinois Tool Works -- in particular heavy equipment (mining, defense, shipping) spending looks challenging for its welding operations -- but the industrial supply companies are indicating that conditions are turning. If so, then margins can turn around for these two segments.

The bottom line
Illinois Tool Works produced a pretty solid set of results for its first quarter, and they confirmed what companies like Danaher and Rockwell Automation are saying about certain sectors of the economy.

On a positive note, its guidance still looks to be a bit conservative. However, the stock trades on a forward P/E ratio of 18.8 times earnings, and it probably needs upwards earnings revisions in order to move significantly higher from here.