Sporting goods store Cabela's (NYSE:CAB) tried to get out ahead of the slowdown in guns and ammo sales, but got too carried away by the effort and ended up shooting itself in the foot. However, despite merchandise margins dropping 120 basis points and operating income getting nearly sliced in half as a result, investors can feel confident it remains on target for future growth.

There's nothing like a shooting tragedy to get politicians clamoring to make political hay out of it with calls for more gun control to spur action by shooting and hunting enthusiasts. Driven largely by the twin elections of President Obama, but also in the wake of the Sandy Hook school shooting in December 2012, calls for and fear of severely more restrictive gun laws spurred a sharp increase in firearms and ammunition sales.

In its first-quarter 2013 earnings report, Cabela's witnessed a 33% surge in revenues and same-store sales that jumped 24% year over year. Sure, it also saw increased sales in soft goods, footwear, optics, and archery, but it was firearms and ammo that drove the increased performance. For ex-guns and ammo, comps were only 9% higher. 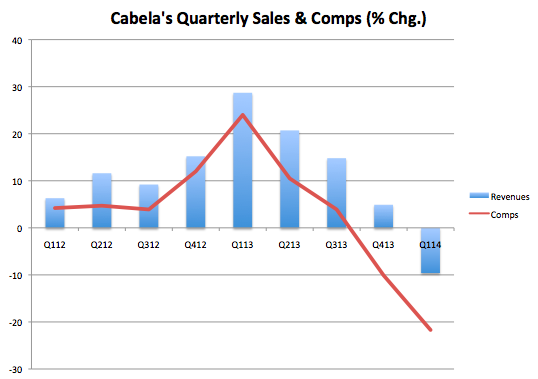 That momentum continued over into the second quarter, with sales and comps rising 21% and 10.5%, respectively, but it was also apparent that while some states passed tough new gun laws, specifically Colorado, Connecticut, and New York, federal legislation would not be going anywhere. The FBI reported conducting over 19.6 million background checks on firearms purchasers in 2012, a 19% jump over the prior year, with December alone witnessing a massive 83% surge in checks.

Now, the FBI says background checks don't translate one-to-one into firearms purchases, but it's a pretty good proxy nonetheless in that someone undergoing the time and expense of applying is a motivated buyer upon approval.

The heightened demand placed on the FBI's resources continued largely over the first half of the year, but beginning in June, we see that demand began to wane. From January to May 2013, the agency processed 10.2 million applications, or almost 29% more than in 2012, but from June through December of that year, it processed 10.9 million applications, or 9% less than the year before. So even though the FBI still conducted almost 8% more checks total for the full year, it was because the results were front-loaded. Background checks are now also down 12% over the first three months of 2014. 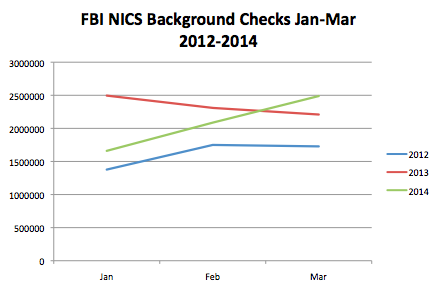 That's borne out by Cabela's results, which saw sales and comps tail off as the year progressed. In the third quarter, sales came in 15% higher, but comps were below 4%. By the fourth quarter, sales managed to rise just 5% higher, and comps tumbled some 10% from the year-ago period.

So, heading into the first quarter, management was expecting things to worsen even more as they were going up against last year's huge first quarter. They started off with really aggressive discounting to generate movement, but instead what they found was that sales weren't really fluctuating. Even as they throttled back on the promotions, sales maintained their pace, and Cabela's ultimately cut the knees out from under its margins for no good reason.

Having learned that, however, Cabela's anticipates sales will even out as the year progresses because the comparables it goes up against will normalize over time. The optics of the sales rise and crash look bad, but guns and ammo are still a relatively strong platform for growth even now, and the sporting goods store remains well positioned to capitalize on that trend going forward.