Huzzah! The fastest-growing segment in the U.S. alcohol market isn't craft beer, it's not hard ciders and teas, and it's not even spirits like whiskey or vodka, despite the attention they've been showered with lately. Instead, it's mead, the 9,000-year-old fermented drink made from honey whose roots extend all the way back to ancient China and that wends its way through the history of India, Greece, and Nordic mythology.

Anyone who's attended a Renaissance fair knows the honey wine concoction is also a favored drink of medieval revelers, but according to the American Mead Makers Association, sales of the sweetly fermented drink are making a big comeback in modern times, surging 130% in 2013 to put it far ahead of any other alcoholic beverage. 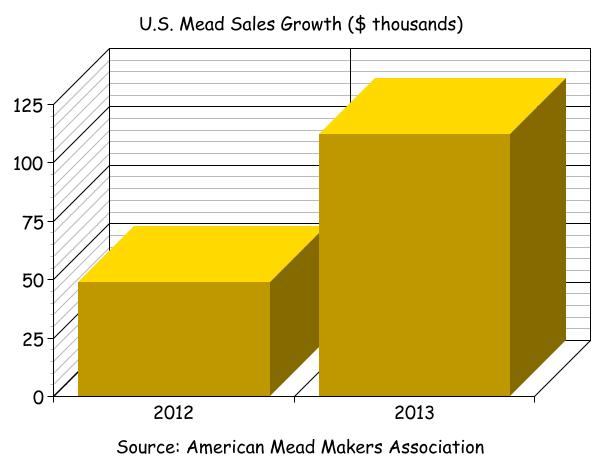 It shares some of the same characteristics with the parabolic growth enjoyed by craft beer and, lately, hard ciders and teas. Cider accounts for less than 1% of total beer sales and is dominated by Boston Beer's Angry Orchard brand, which, according to IRI data, controls 52% of the market. Beer Marketer's Insights says Anheuser-Busch InBev and MillerCoors, the joint venture of SABMiller and Molson Coors (NYSE: TAP), together control three-quarters of the total U.S. beer market. Yet mass-produced beer has been on the decline as craft brews, ciders, and teas rise.

Against such industry heavyweights, and with only 823 cases produced last year, mead production is microscopic in comparison to even hard cider's paltry sales, which doubled last year to almost $221 million. The number of meaderies are proportionately nonexistent as well.

Because of government regulations regarding its fermentation, mead is produced in wineries, of which there are around 7,500 operating today, only about 150 of which make mead. In contrast, there are now 2,822 breweries operating in the U.S., 98% of which, or 2,768, are considered craft breweries.

So the brewers aren't necessarily worried about mead stealing customers or share at the moment, but it may mean some of the largest wine producers, such as the world's biggest, Constellation Brands (NYSE:STZ), will begin taking a closer look at this growing niche. Wine sales hit $2.55 billion in 2013 for Constellation, a 2.3% increase over the prior period, accounting for 45% of total sales. If mead can continue on its present trajectory and gain a critical mass, it would be hard to ignore its potential.

I got my first taste of mead at the New York Renaissance Festival and subsequently discovered Carroll's Mead, a small meadery in New York that was the Ren fair's supplier. I've been hooked ever since, and though I make sure to keep several bottles of Carroll's stocked in my cellar as it's one of the few meads available in my area, I'm even considering taking up beekeeping to produce my own honey to make small-batch mead.

The industry is still dominated by small meaderies that, like B. Nektar and Rabbit's Foot, which got started in the basements of their owners, are probably too small for a Constellation acquisition. Yet like Constellation taking its Corona beer that it acquired from Anheuser-Busch and turning it into a new craft beer sensation, it's likely that if mead continues its meteoric rise in popularity, Constellation will need to either look at these small mead makers or begin getting its own wineries to produce the fermented beverage on their own.

Either way, it's clear that mead, long the drink of kings, isn't just for Ren fairs any more.

Could This Be the Next Beer-Killing Beverage? @themotleyfool #stocks $STZ Next Article
Current