Star Wars: Rebels, an upcoming animated show that will premiere on the Disney (NYSE:DIS) Channel this fall before shifting to Disney XD, has been generating a lot of Force-related buzz recently.

Disney has certainly been busy with Star Wars lately, with its controversial retcon of the Expanded Universe (EU), its revelation of the cast members of Episode VII, and an announcement that "at least three" new Star Wars spin-off films were in development.

Star Wars: Rebels will notably be Disney and Lucasfilm's first new creative effort in the freshly cleared Star Wars Universe, which now only canonically includes the first six films of the franchise and The Clone Wars, a similar animated feature that aired on Time Warner's (NYSE:TWX) Cartoon Network from 2008 to 2013.

But whereas The Clone Wars saga occurred between Episodes II and III, Star Wars: Rebels will take place between Episodes III and IV, 14 years after the foundation of the Empire and five years before the destruction of the Death Star at the Battle of Yavin. The series will star Freddie Prinze, Jr. as Kanan Jarrus, a Jedi Padawan who survived the purge of the Jedi and teams up with a motley crew of misfit rebels to battle the Empire.

Planting new roots to leapfrog into the future
John Morton, who played the minor character Dak in Episode V: The Empire Strikes Back, recently told Movie Cricket that Star Wars: Rebels would "bring in the continuity from Clone Wars, the Original Trilogy, and the Prequels to enable Lucasfilm and Disney to tee up to Episode VII."

In other words, Rebels could draw in younger audiences -- who might be unfamiliar with the first six films -- into the Star Wars Universe, while clearing the slate of the Expanded Universe's convoluted maze of new characters.

In its place, Disney and Lucasfilm could reboot popular characters from the EU while eliminating more controversial storylines. This means that Luke Skywalker's wife Mara Jade could resurface in Rebels and reappear in Episode VII, while Han and Leia's son Jacen Solo, a Sith Lord, could be retconned out of existence.

Simply put, Rebels could plant new roots in the Star Wars Universe, then fast forward more than three decades to Episode VII to catch up to those new characters later in their lives.

Why Rebels is a smarter move than Agents of SHIELD
In many ways, Disney's Rebels strategy is similar to its approach with Marvel's Agents of SHIELD, which airs on Disney's ABC network. Just as Agents of SHIELD expanded the Marvel Cinematic Universe to the small screen, Rebels could serve as the promotional glue of Disney's Star Wars Universe.

However, Disney's strategy with Rebels is clearer than the route it took with Agents of SHIELD.

Therefore, securing the growth of Disney's Cable Networks -- which account for 71% of the revenue and 93% of the operating income at Disney's Media Networks segment -- is far more important than the future of ABC.

Meanwhile, making Rebels an animated show rather than a live-action one resolves a key problem with Agents of SHIELD -- the appearance of film characters in the TV series.

Agents of SHIELD had trouble winning over some fans due to the lack of involvement from the characters in the films. The showrunners tried to resolve this issue with a few guest appearances from Nick Fury, Maria Hill, and Lady Sif, but those moments were few and far between. Rebels, on the other hand, can simply drop in animated versions of major characters from the main series -- such as Luke, Han, or Darth Vader -- whenever it wants.

A smaller, more focused audience
The big drawback, of course, is that Rebels could attract a much smaller audience as an animated feature on Disney XD. The Clone Wars series attracted 3.99 million viewers with its series premiere in 2008, but that number dwindled to around 1.5 million by the fifth season.

Agents of SHIELD started strong with 12.12 million viewers last September, but has dropped to 5.37 million viewers in its most recent episode. Disney's plan with Rebels, however, is really less about total eyeballs than it is about the core demographic.

The success of Agents of SHIELD, like other primetime shows, is measured by the 18 to 49 demographic -- a key target for advertisers. By comparison, Disney's Disney Channel and Disney XD are focused on 9 to 14-year-old "tweens". Consider these facts -- approximately 86% of U.S. households receive the Disney Channel, 71% of households receive Disney XD, and the Star Wars prequel trilogy hit theaters between 1999 and 2005 -- back when those tweens were merely tots.

Therefore, airing Rebels on the Disney Channel is a strategic way to promote the upcoming film to younger audiences, while possibly gaining some adult viewers for its tween-focused channels along the way. 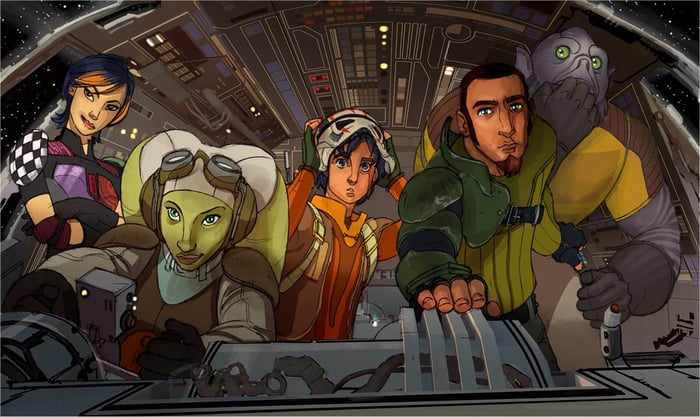 The bottom line
In conclusion, Star Wars: Rebels could be a great prequel series for the upcoming Star Wars trilogy, reestablishing the known universe for kids and adult fans alike, while teasing us all with glimpses of the long-term future of the beloved franchise.

Rebels doesn't have to be bigger than Agents of SHIELD to benefit Disney. Instead, it is aiming squarely at introducing Jedis, droids, and the Force to a new generation of kids.